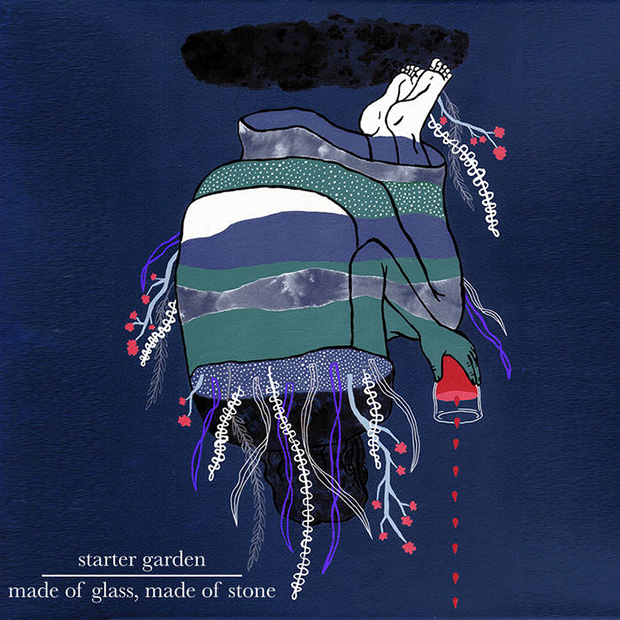 Starter Garden – “Made of Glass, Made of Stone” [Album Review]

If a part of your life was ever straight-up miserable, you’re going to connect with the debut album from emo rockers Starter Garden. The nine tracks that constitute Made of Glass, Made of Stone are all powerful but in a contained way, like a toothless dog growling. Musically, the highlights of the album are “Back in The Groove” and “Why Does It Feel Like You Hate Me?” in which we hear the raspy, tortured vocals and patient drums finally let loose a bit. These two songs showcase the aggression that we hear sleeping in the other tracks, which can feel bland and just too unpolished.

But the real story here is the lyrics, which paint a gut-wrenching portrait of depression. Most songs read like equal parts diary entry and poem, containing gems like, “I’m trying to be something more than just pain covered in skin” and “At the bottom of my brain collects a pool of all the time I’ve wasted, / Until it overflows and consumes my whole body.” The speaker is Glass, fragile yet dangerous when broken into shards that cut. He is Stone, sitting solipsistic and maddeningly inert. He is isolated. He doesn’t quite know how to get better, and he constantly finds himself back where he began. Much like the album in fact, as he declares in both the opening and closing tracks, “I am made of glass, I am made of stone.”

As moving as the lyrics are, for me they are not enough to compensate for a fairly lacklustre, unimaginative musical performance. The music effectively channels the depressed vibe of the lyrics, but doesn’t transform it into anything particularly interesting. That being said, if you’re just looking for some chilled-out rock to give release to some angst, I’d tell you to give Starter Garden a shot.

Made of Glass, Made of Stone Track Listing:

Check out Made Of Glass, Made Of Stone