We get a lot of albums, books, and various types of releases through PureGrainAudio, but rarely do we get to have the opportunity to have something as appealing as a board game land in our hands. On this lucky occasion, I was able to score a copy of Spontuneous (order your copy RIGHT HERE) and organized a Sunday evening with some friends at the local pub in my new home in England to have a go at this music-based party game. Without any waiting, we quickly settled into the rules. Now I’ve done my fair share of game explaining, having worked previously in board game cafes, bars and pubs back in Toronto, so I took it upon myself to try and explain the rules, and I won’t lie, the rules are a bit hard to grab at first.

Here’s the core principle of play: The game is played in rounds. Each person becomes Tunesmith for a round, and they offer a Trigger-Word from their Hitlist (which is compiled before the start of the game), and the rest of the players try to sing a tune that has the Trigger-Word in it, within 15 seconds. Last person to start singing before the timer ends gets to roll the dice and advance. If no one can think of one (read: they’re ‘stumped’) then the Tunesmith proves they know a song with the Trigger-Word in it and they roll the dice to advance. If that’s a bit hard to wrap your head around, don’t worry, it took a few times to explain that one myself.

However, besides getting the hang of the rules and the actual task of jumping into the first initial rounds, I was impressed with just how breezy and fun the game actually ended up being. The core principle, while maybe not the simplest thing to explain to someone, is quickly picked up by watching others figure it out, and soon enough all 8 players knew what they were meant to be doing, and very quickly developed their own strategies. It’s quite a challenge trying to recall a song with a specific word when the seconds are counting down, and despite my own premeditated Hitlist, I was often stumped by the simplest of words.

But that quickly becomes part of both the fun and strategy of the game, and I was equally excited to see that people were quickly able to jump into it with both feet. It helps that the game is guided by the simple objective of getting from Start to Finish, but also introduces an element of randomness and chaotic disruption with the dreaded Treble Clef cards. Landing on one of the sporadically placed Treble Clef spaces means drawing one of these cards, much to everyone’s dreaded anticipation, because these cards were savage! I watched as the person in the lead had to drop back to Start, saw many including myself take many spaces back, and was intermittently faced with sudden challenges like the chicken dance, yodeling, and impromptu karaoke-style sessions. I’d say precisely because these cards raise the stakes so dramatically that they made this the funnest part of the game.

Where it stops short is in some of the details. The iceberg effect of the rules, particularly around scoring were a minor source of annoyance, as people struggled to figure out what did and did not count. I don’t find this to be particularly unique to Spontuneous, and in fact have encountered this difficulty with various party games, including the more popular ones, so I didn’t hold this particular one against the game. There were other small gripes, such as the unfortunate wording in some cases (“Trigger-Words” in particular prompted a rather bemused response). Or the fact that some spaces are used to go in two different directions, all to support the pattern of a treble clef on the board, which seems trivial until a group of players are trying to remember whether that token was going “this way” or “that way”.

These are all minor inconveniences that can and were quickly worked around. My main gripe comes with Finishing The Game. I will give the designers credit, they did away with the tired practice of needing to roll the exact amount to get to the Finish space, which I’ve always regarded as a bullshit rule in board games. However, I am annoyed that simply landing on the space does not guarantee the Leader a win, but instead prompts a sudden Challenge Round, where the 3rd place player becomes Tunesmith and the Leader has to score points in order to finally win. I find this bit hard to fathom, because even if you only got ahead because of Treble Clef cards, that still means you were able to carry out those challenges on the cards well enough to put you forward. 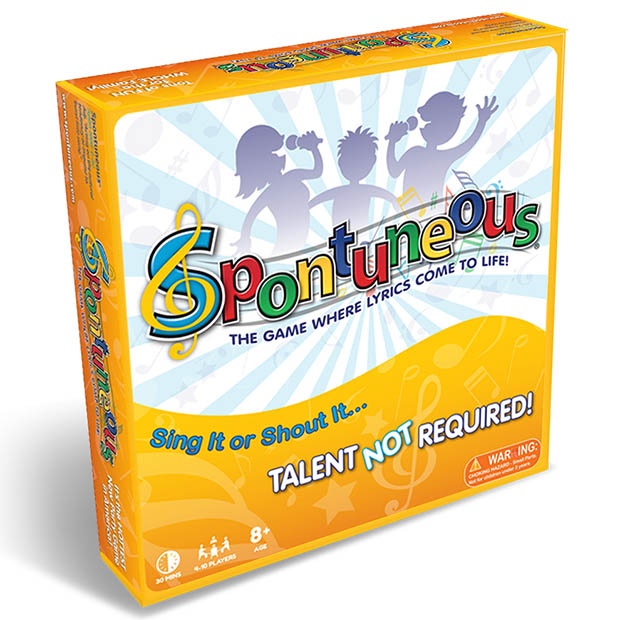 I also think that pitting one player against another is pretty unfair, because it often ends up with an obscure word from an even more obscure song, and only results in the Challenger gaining more territory. And so it goes that the final part of the game, instead of becoming a succinct ending, turns into a tense situation, as lagging players close the gap and easily stump the Leader with obscure references to outlandish words or unheard-of songs. At the end of the night, we were looking to “just finish the damn thing”, especially since the game trying to bill itself as a 30-minute affair had already approached 2 hours (albeit including rules and quick bathroom breaks). I’ve always been a fan of a game with a simplified end goal, especially for party games, so we ended up just calling it after the Leader’s third Challenge Round.

All in all though, despite the above gripes, Spontuneous offers players a chance to sift through their own musical knowledge, and allows them to interact with other players. I had genuine moments of being flabbergasted by people’s knowledge of songs, and some people impressed me by knowing some songs I didn’t think they’d ever know. I was also astonished at how, despite wide cultural differences, there were also so many similarities. It was genuinely fun to play and I look forward to getting another opportunity to playing this one again.

I think it says a lot about the game when, upon getting a round from the bar, I was asked by one of the patrons what game we were playing, because it seemed like a lot of fun. We were certainly the loudest group in the pub that night, but moreover we were able to lighten up with it and have fun, which is more than one could ever hope for when it comes to a party game. For those who have even a cursory knowledge of music and lyrics, this is a no-brainer for groups of people who are ready to get a little more boisterous and more willing to break out of their shell.

Check out some Spontuneous game play