No Small Children allowed! This three-piece, all-female rock band hails from Los Angeles, California and has one of the coolest backstories you’ll ever hear. The members of the group, (Nicola Berlinsky and sisters Joanie and Lisa Pimentel) are all school teachers by day and rock stars by night, playing shows locally around L.A. and creating quite the buzz. Like all bands, No Small Children was looking for a break and they got it this year when they covered the famous “Ghostbusters” theme song for the all-female, remake of Ghostbusters. Since then, the threesome has been garnering a lot of media coverage and expanding their fan base. We recently spoke to the girls about the band, their day and night jobs and what it was like to go to the Ghostbusters film premiere. Now screw your homework and read on, and grab their album The Hold Tight, I’m Flying on iTunes.

I’m going to take a guess here… the band name No Small Children is inspired by having to deal with small children every day? Tell us a little more about the band name.
Joanie Pimentel: Lisa and Nicola were covering playground recess duty on a Friday before Mother’s Day. When you don’t have children and work at an elementary school, this holiday can feel pretty isolating. Lisa and Nicola decided on the spot to start playing together (long-time supporters of each other’s music) and chose No Small Children as the band name before playing the first note, turning a feeling of exclusion into an opportunity.

Nicola Berlinsky: When Lisa’s sister Joanie joined No Small Children, the name still fit, as her children are grown.

What do your school students know about your other job in No Small Children? Do you ever discuss it in class or are they otherwise aware of it?
Lisa Pimentel: At first we kept quiet about our music at school, even when we played 55 shows our first few months, from March to June. But as our enthusiasm and opportunity grew, we couldn’t help but talk with our students about the work we give to our music, and what it takes to grow as a musician. Soon our colleagues, principal, students’ parents, and former students were coming to our shows and the kids now wear NSC shirts to school. Turns out the children are our greatest champions, even though they can’t get into most shows. 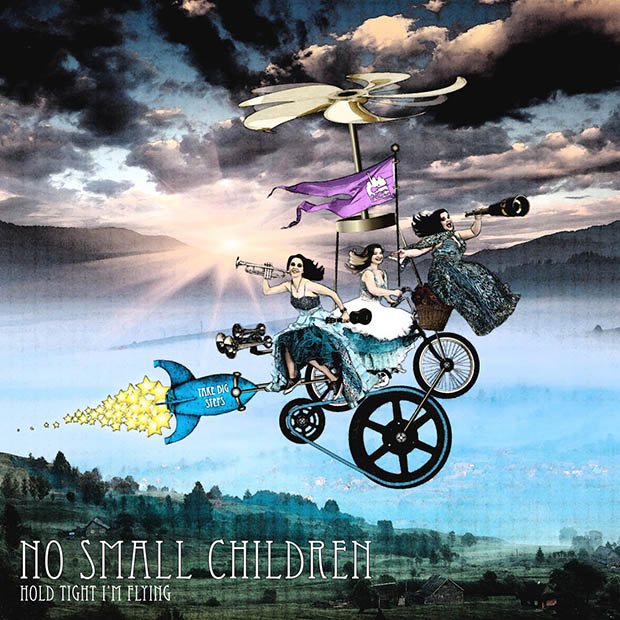 You got a pretty big break this year when your cover of Ray Parker’s Ghostbusters song appeared in the rebooted, all-female Ghostbusters movie that came out this past summer. How did this huge opportunity come about for the band?
Lisa Pimentel: Last year, we dressed up as the Ghostbusters for a Halloween gig we had and decided to add our version of the theme song to the set. The crowd loved it! In anticipation of the film’s all-female lead casted remake, we decided to record it and put it on our YouTube channel when the film came out in theaters. We never imagined it would actually end up in the movie. We were so happy with the way the recording came out that we decided to submit it to Theodore Shapiro, a parent of our students and composer on the film. We made it clear to him that we had absolutely no expectations but much to our surprise, he agreed to pass it along with the caveat that the music for the film had already been chosen and that ours would be one of hundreds of submissions.

After hearing nothing for the next six months, we assumed it died on the vine. Then out of the blue, and already a week into the film’s post production, we got the call saying that the Music Editor, Erica Weiss, and the Director, Paul Feig, both loved our version of the song and were going to find a place for it in the movie! Even better, they both loved our story and championed us throughout the process.

I’m guessing you got to go to the U.S. premier of the movie? What was that experience like, attending a major Hollywood film premier? Did you get to meet any big names?
Lisa Pimentel: We did attend the premier and it was fabulous. We always wear matching looks and were very lucky to have Pinup Girl clothing line sponsored us for the event with gorgeous dresses. Also part of our signature look is to wear Converse Chucks so we’re pretty sure we had the most comfortable shoes that night. As we walked the carpet, they had our song blasting on repeat. It was crazy!

Later at the after party, we got to meet Paul Feig and Erica Weiss in person. We were taken around the party and introduced to many of the wonderful people who had worked on the film. We were really surprised to learn how many people had already heard about us and our story, including Melissa McCarthy who was nice enough to talk with us for a bit. We were totally humbled by the experience. It was an incredible night for us.

Your latest release is the album, titled Hold Tight, I’m Flying, which features standout tracks like “Big Steps” and “Never That Far”. How does it differ from your first two albums in sound and style?
Lisa Pimentel: Our music is always evolving. Our most recent album has more layers than the previous recordings and the production is more nuanced. Although always accompanied by heavy guitar sounds, we incorporated other instrumentation including horns, strings, and even an accordion.

Now that Hold Tight, I’m Flying has been out over a year, are you pleased with the reaction it has received?
Lisa Pimentel: We’re very pleased with the reaction. Throughout the year, there have been times where different songs off this album become appropriate for something that is occurring in the world. It’s given the album walking legs well after its release.

Now that No Small Children is gaining more national popularity, are you finding it more difficult to balance the band with your day jobs teaching at school?
Lisa Pimentel: We suspect our experience is similar to that of anyone who strives to balance work with family, school, volunteering, etc. We think of teaching and being a musician as parallel careers, neither are hobbies and both require the best of us. It’s always been hard work so to balance both, we have to be organized and smart about how we spend our time. Oh and coffee…we drink a lot of coffee.

What does No Small Children have in store for the beginning of 2017 and beyond?
Lisa Pimentel: We just recently finished a kick-ass new single that we’re planning to release in January and are in the process of completing several more. We’ve been working with the legendary producer, Bob Marlette, on these recordings and are really excited about how the music is coming out. In addition to local shows and tours planned around school breaks, we’re also in discussions with TV and movie studios for the placement of our music.

Dr. Martino Cling to the Past while Embracing the Future on Their “Reruns” Music Video [Premiere]