Sweden’s Långfinger are a killer heavy rock trio which released it’s latest album, the ten-track Crossyears, on September 30th, 2016 via Small Stone Records. The studio recording can be purchased RIGHT HERE, heard below in full and now, has been explained in detail! The guys were kind enough to share this exclusive track-by-track guide of each of the album’s 10 songs.

01. “Feather Beader”
Victor Crusner: We decided directly that this was the album-opener, based on the first riff that kicks off the song. To us, it sounds a bit like a rocket ship taking off, aggressive and progressive in it’s riffage. The lyrics are a not too regular dosage of doom and gloom, but we dish it out regardless. “Feather Beader” originally had four verses, then was later dissected into two. The chorus has producer Olle Björck featuring during the latter part of the call and response.

02. “Say Juiter”
Jesper Pihl: In this salute to the gods of classic rock, Kalle kicks off the song with an epic shriek from his guitar! What follows is an open landscape of guitars and rhythmic song, call and response between Victor and Kalle, and a drum pattern completely following the rhythm of guitars and vocals. This is definitely the one track from the album that we’ve played the most live, it’s a great opener and has great energy to it. The heavy open riffs and playful bridge opens up the opportunity to play around with the dynamics of the song and squeeze in a quick jam-sesh in what is otherwise a quite straightforward rock song. A personal favorite part of mine is the quick freakout and collective accelerando that leads the guitar solo to the backbeat. I love those kind of fills and spastic accelerations that, like a vortex, pulls you further into the song.

03. “Fox Confessor”
Victor Crusner: “Fox Confessor”, which as titled pays tribute to a personal favorite Americana album, like many of our songs, established itself as an instrumental; was inspired by our favorite Krautrock bands from the late sixties. That was up until I spent some time in rural Argentina. The lyrics began as rough scribbles, and in the attempt to characterize the broad landscape, which seemed to encompass most of my days spent there, a sort of comic relief broke out into lyric. 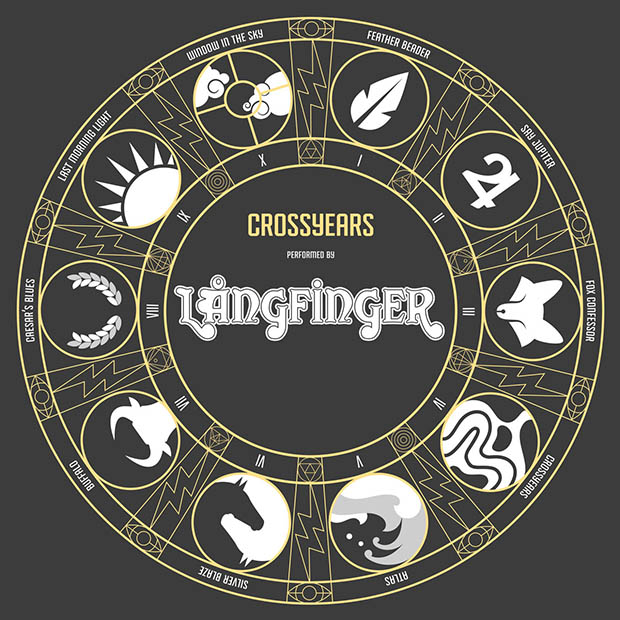 04. “Crossyears”
Victor Crusner: The title track that naturally cemented the sound of the album. Containing three verses that are disparate but still manage to touch on the same lyrical theme. The final part of the song was entirely improvised and it’s probably the 15 seconds of rock frenzy on the album that I come back to and give a listen to every once in awhile. The bass in the intro, which is actually all that racket accompanying the riffing guitar and the pumping bass drum, took shape from using all the effect pedals we could find in the studio.

05. “Atlas”
Victor Crusner: Conceivably our heaviest song to date. I figure the riffs are aromatic with a potpourri of many of Kalle’s favorite progressive rock bands from the 70’s. The addition of the organ throughout the song came from playing around with an alternative version that then ended up becoming the intro. It’s already my favourite song to play live. Much because of the diverse dynamics the number offers and the way the vocals utilize a full range.

06. “Silver Blaze”
Jesper Pihl: Thick and heavy, fat bass lines and a mountain of a bass drum. Kalles whipping hand over the strings during the main riff. This song was refurnished and straightened up in the weeks prior to the recording, at first it was incredibly busy and almost overexcited. It still needed some carving and caring before it’s full potential to shine through, the product of this is the cutthroat sharp structure of the song. But the old version shines through though! During the guitar solo we jam out and float away in that flow of accents and rolling bass lines, but now it’s concentrated to a certain part of the song that takes a little detour into the prog rock of the ’60/’70s rather than it being a cut out of that era. It’s a rock solid piece of rock and is quite obvious in it’s appeal, it gets you going! And for the private eye’s out there looking to uncover all – there is evidence available to the public of this previous version in the aether.

Check out the album Crossyears

07. “Buffalo”
Kalle Lilja: The odd fish on this record. This track has followed us in a number of different disguises since a few years back. Together with the producer duo, Olle Björk and Johan Reivén, we managed to shape some things up and deliver a raw catchy tune that really gets your boogie-meter to woogie! The riff is the boss on this one, it’s just a steady mantra that could go on forever. The best thing though is that the song structure is pretty simple but the ingredients is mainly weird. Also vibrant drum patterns by Jesper!

08. “Caesar’s Blues”
Kalle Lilja: “Caesar” is a very eerie and delicate cat, he feels me up with his groove and feels every time we play him. Listening to this takes me back to the “Stare Me Blind” days, the verse is full of that emotion. I have no idea what inspired that sound and those melodies, but it came from within. I’d like to say it was the sound of our collective emotion and our expression of that. It came so incredibly natural and playing it felt better than anything. And this song captures this, a glance in to our past and into us. The chorus though, it breaks free from that foggy gray Scandinavian angst that provided the world with Swedish popartists, Håkan Hellström, Broder Daniel, and Black Metal. It provides a pathway back to the groove of the spooky main riff and allows me to disport with drum fills in its near entirety! Absolute gold for the live set!

09. “Last Morning Light”
Kalle Lilja: A personal favorite of mine. Probably the contrast song to “Fox Confessor”, in terms of construction. In other words, no natural verse or chorus, just a landscape of heavy no brainer rock riffs nicely glued together. Written when I was in one of my deepest Mountain/Leslie West period. Later I realised it reminded me of a Swedish rock band that has inspired me more than any other band from this country. So I picked one of their greatest tunes and translated the title to English, as a tribute. “Last Morning Light” is also the albums only track that is cut in one take, extremely good vibe at first try. A perfect snapshot of the band in its full force.

10. “Window In The Sky”
Kalle Lilja: Written back in early 2013 I saw this track as the natural bridge between our previous album Slow Rivers and the album next to come. It is in a way a short mini opera, divided into four different parts. The first part is more or less a standard rock song, including two verses and two strong choruses. Second part is this fast riff speedway path which leads into my very first written guitar solo. Usually solos is just improvised stuff, from the the top of my head, but this track I felt needed a different approach. So I whipped out the old solo and replaced it with a more stripped down double tracked solo. The third part, based around a mellow riff that had been in my revox since forever, fitted perfect as the passage back to the coda. Even though “Window In The Sky” was written almost four years ago it didn’t found it’s way into the live set until now. Which makes the oldest track of the album the freshest one, funny enough.