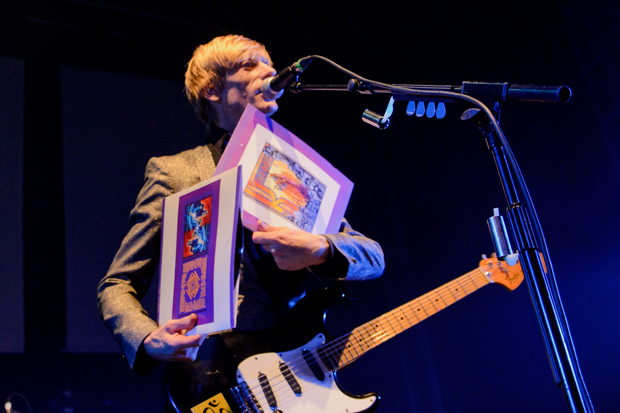 Kula Shaker were one of those bands who passed me by in the ’90s. While the rest of the UK was losing their floppy-haired minds over Oasis, Blur, Pulp and so on, I was living in ripped denim and discovering the likes of Motley Crue and Iron Maiden. Roll the clock forward and I now find myself in the O2 Academy in Leeds joining, what can at best be described as mixed crowd as the indie band celebrate the 20th anniversary of their classic K album.

New fans and those who “were there in the day” pack themselves into the Leeds venue where the band are performing the latest date on this hugely popular tour. For some hearing Crispian Mills and his bandmates performing their debut in full is a pure nostalgia trip whereas, for others, this was a great opportunity to see what the fuss was about. So, with a fairly strong whiff of incense filling the air around the Academy, Mills introduces the album with a smile on his face “this is a birthday as you might know” as he waves the album sleeve around

From that point on, the band take this audience on a pure nostalgia trip as they faithfully rattle out the album with most people singing the songs back word for word. The night ends with the band closing off with hit single “Govinda” going against the usual feeling that nostalgia trips really should be left as nothing more than fond, slightly hazy memories.