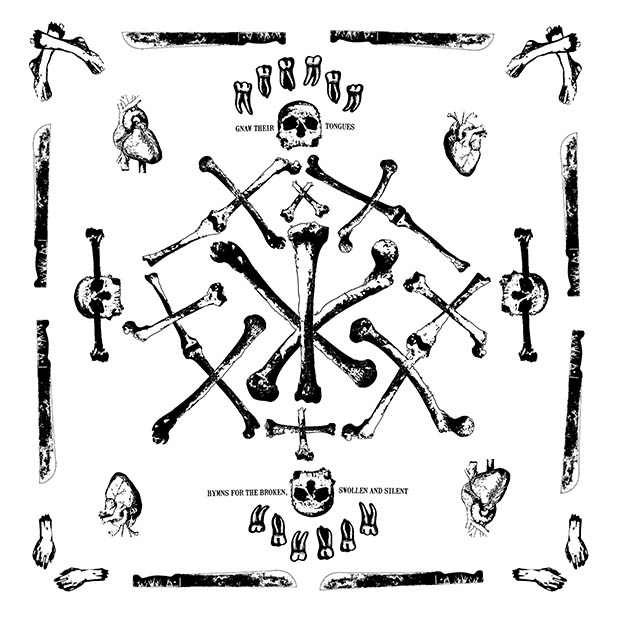 Gnaw Their Tongues – “Hymns for the Broken, Swollen and Silent” [Album Review]

This proves to be a real kicker to try to explain here. Okay…

As one of the many dark incarnations of Mories of Friesland province in The Netherlands, this is my preferred one. I first came to GTT by way of Seirom, another act of his (of many others again, be reminded). What this signifies, is that there is a considerable fortune of ideas and experimentation to be dealt with, along with sincere realism, through his separate channeled projects. This is a particular type of dystopian darkness here with Hymns…; a very specific and chilling type. For the unaccustomed or uninitiated ear it may even seem, horrific. This will no doubt have a home within the realms of some people and friends I know for sure, but it is definitely to be understood way better by experienced travelers of this type of aural landscape. The last album that touched my shadow and shady side so deeply was Altar Of Plagues’ Teethed Glory & Injury, but that is a totally different misanthrope than the one running loose here.

By the time you hit the 3:30 mark in “Hold High the Banners of Truth Among The Swollen Dead”, and you hear the child preacher’s voice piping out praises to the Lord, you shudder of what is to come. This is like a meld of Dødheimsgard, SIGH, Dissecting Table and a few more out-there pioneers in a sinister amalgam of electronic malignancy. There actually has always been a feel of Author and Punisher, and the more glaring Godflesh in other releases within just the recent past. If there is a hell, then rest assured that GTT has found the basement, or sub-cellar. Mories demonstrates with very controlled passages, moods that shift from absolute disparagement (“Silent Burned Atrocities”), to glimpses of almost enlightened twisted bliss (as felt in the end half of “Your Kingdom Shrouded In Blood”). The title track is perhaps the darkest affair on display, and it runs more of an atmospheric drone pace before becoming the heavy industrial discordance the rest of the album mixes up with.

This is an album geared to a particular feel, an exact type of wallowing. It has the type of suffocating feel after a while as some might have from listening to Portal of Australia. Hearing this album in both an appropriate and (very) inappropriate setting, helped to craft my observation of this latest collection of experimental Black Metal-esque woe. To establish that creatively and integrity-wise, GTT has a formidable sonic punch regardless with this release is assured. It should also be known that this is geared for die-hard fans and those that dare such darkness; whereas any outright introduction to GTT are better pursued in the likes of last year’s Abyss of Longing Throats, or even the brilliant NV collaboration with Dragged Into Sunlight. Safe to say I haven’t been pleased/disturbed by a release it’s like for this year yet, and 2017 is cresting.

Humanity, take note. This is the perfect soundtrack, to accompany the very worst of unseeable video news, and documentary reports you’ve seen so far for 2016; including unearthed war graves and crime victim burial sites. When the helpless feeling of numbing emptiness growing from such exposure seems of comfort, you’re ready for this album.

Hymns for the Broken, Swollen and Silent Track Listing:

01. Hold High The Banners Of Truth Among The Swollen Dead
02. The Speared Promises
03. Frail As The Stalking Lions
04. Your Kingdom Shrouded In Blood
05. Silent Burned Atrocities
06. Hymn For The Broken, Swollen And Silent
07. I Have Clad The Pillar In The Flayed Skins
08. Our Mouths Ridden With Worms