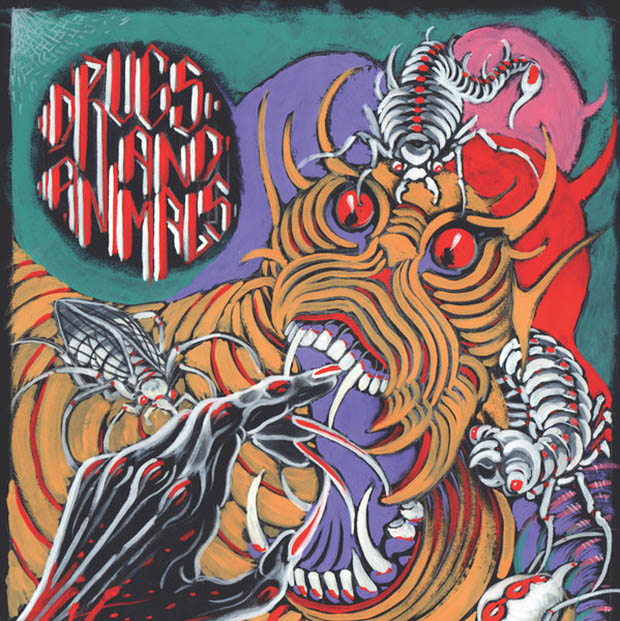 First came across these guys back in 2012 through Bandcamp from a recommendation; I dug the few tracks from their self-titled debut, so I’ve kept an eager ear out for this. Gotta say, this matched my hopes, and boy, then some. This is exactly the type of album that needs to be forced into the hands of extreme metal and rock fans everywhere. When you hear work like this, and you just know that no-one will hear it, or have any idea of this band’s existence, things just have to be put right. Plus, it goes to show that when some are capable of doing an album on their own terms, and then subsequently release and promote it as well, no person has any right to bitch about where choice music is nowadays. No one. In case clueless souls are still asking, Cokegoat’s Drugs And Animals is yet again another brilliant example.

Alright, seriously, doing a song-by-song analysis here would be a waste of time, mainly because there isn’t a weak cut in the bunch. Calling this post-rock (bullcrap tag), or even sludge, wouldn’t be a stretch of the truth, but certainly not the whole truth either. To even say their style runs closer to the likes of Neurosis and Helms Alee, with a dash of Mastodon, and drizzled liberally throughout with Melvins swagger wouldn’t be too off. Matter-of-fact, one of the vocalists of the three here seems to have a heavy Scott Kelly vibe going on. So much so that you would almost think that you really were listening to late ’90s – early ’00s Neurosis for a second, until other subtleties and nuances give you cause for query. For this humble reviewer, however, all of this is the furthest from a bad thing. That said, if I have to name-drop songs most worthy of praise, they would have to be “The Burner”, “Where The Sun Dies”, the very epic closer “Kreator Destroyer”, and a sure pick as the soundtrack of despair, “Winter Of Fear”.

In the end, there is such nuance in the dynamic and emotional content of this album. Very tactfully progressive, I would also add, as much evidenced in part by the colourful touches and fills of drummer Jordan Schultz. All aspects of the band tend to craft satisfying songs; an album devoid of filler. There are tides and swells that tend to fit a variety of moods here. It sounds as though, aside from the songs being developed over a period of time, that the production also had to take great care in honouring what was put before it.

Hailing from Chicago, the city that brought you Bongripper, Yakuza, and Disrotted; chalk this up as another definitive win for the Windy City; if not a place in the Top 20 list of 2016 for albums. Most of all, pray for a tour so as to behold this magnificence, and when they do, support them vehemently. Again I reiterate, this album is a must-listen, if not to be outright owned, no joke.

Check out the album Drugs And Animals