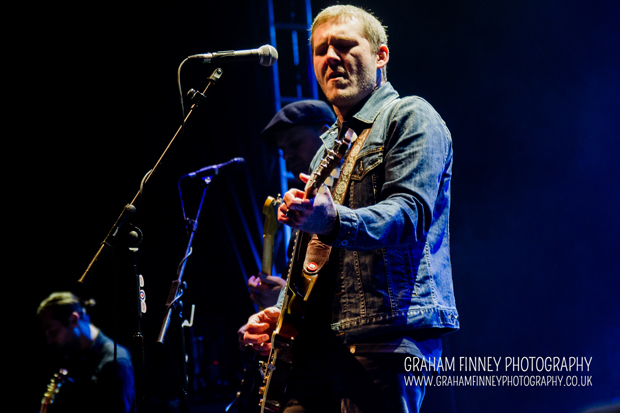 For some unfathomable reason, it’s an early start tonight meaning former Gaslight Anthem frontman Brian Fallon takes to the stage just after quarter past eight but, to the hardcore fanbase in attendance, time matters not because, for the next hour or so, the New Jersey singer/songwriter has the Leeds crowd hanging off every word and every note.

With a smile permanently plastered across his face, watching Fallon perform is an absolute joy. Before we even get onto the music, the frontman has a connection with his audience that borders on comedic at times and has a range of banter that, before we’re even two songs old, has taken in subjects like President Trump and Baby Jesus. It certainly means that down time which would usually be filled with awkward silences during a lengthy break, passes by quite quickly as Fallon banters with the crowd and, in one particularly touching moment, invites a fan forward so he can sign a photo for him.

It’s not all about the banter though as there is also an eighteen song set to talk about as well. In it there are plenty of moments where you look around and groups of fans are singing every word to songs like “Nobody Wins”, “Honey Magnolia” and “Steve Mcqueen”. It’s that connection between Fallon, his songs, his lyrics and his fans that very few musicians have. Throughout the set there is an intimacy that you don’t often see at gigs these days and means that, by the time the set winds up with a NOFX cover, every person in this room leaves an even bigger fan than when they arrived.

Check out the song “Painkillers”