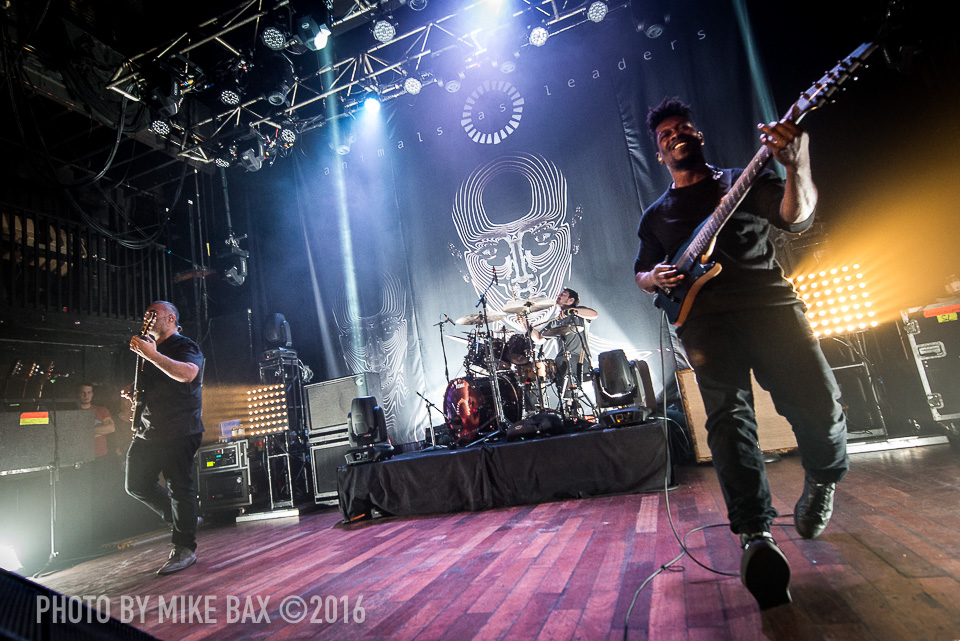 Performing to an utterly sold out venue this evening, instrumental three piece prog wizards Animals As Leaders dominated the stage performing a dozen songs from their four studio albums. Tosin Abasi, Javier Reyes and Matt Garstka released The Madness of Many a few weeks prior to this show, and the weight of material performed was from this new album, arguably their best release to date.

Animals As Leaders are a band that elicits gasps of amazement from audiences around the world. It was fitting that Intervals and Plini opened this show, the virtuoso guitaring of Plini Roessler-Holgate and Aaron Marshall (Intervals) garnered the very same gasps of amazement throughout both of their sets. What was interesting this evening was that Plini and Intervals sets featured Aaron Marshall AND Plini Roessler-Holgate on guitar with the same bassist and drummer for both performances – Plini and Aaron simply changed positions on stage for their respective sets. They were calling their performance PLINTERVALS. Plini’s instrumental set differed slightly from Intervals set, the Plini material being a bit softer in sound without being any less complicated than Intervals material. But really, fans got treated to an entire evening of complicated guitar work for the duration of tonight’s show, with no band any less interesting than the other. I’m guessing that Nathan Bulla (drums) and Simon Grove (bass) were the musicians for both sets, but I could be wrong on that. Plini jested that one of the songs he performed was about him moving to Toronto, and both he and Aaron professed their appreciation from the audience numerous times as they performed.

By the time Animals As Leaders took the stage, there wasn’t an empty spot to be found in the Opera House – the show selling out a few weeks earlier. Abasi, Reyes and Garstka walked out on stage, waved at the audience and launched right into ‘Arithmophobia’ the lead song on The Madness of Many. The real beauty of Animals As Leaders material is the marriage of their musicality around the complicated drum and guitar riffs they weave throughout all of their songs. ‘Arithmophobia’ boasts some nutty time changes and a relentless amount of complex picking – and it was delivered in perfection tonight to immediate gasps of amazement from the audience. From there, Animals As Leaders worked their way through songs new and old with an ease that would put most touring musicians to shame. ‘Ectogenesis’ and ‘The Brain Dance’ utterly blew me away live, managing to somehow sound MORE amazing than the studio recordings, a feat I wasn’t sure was even possible!

Almost 1000 people turned out on a Monday night to watch three bands play an evening of completely instrumental music – a prospect I wouldn’t have thought as appealing as it apparently was. To me, this speaks volumes to the draw of quality live music in Toronto, and the desire to watch true musicianship live. Tonight was easily one of the best performances I’ve seen this year.

*These could be wrong. Let me know if this is the case, please.