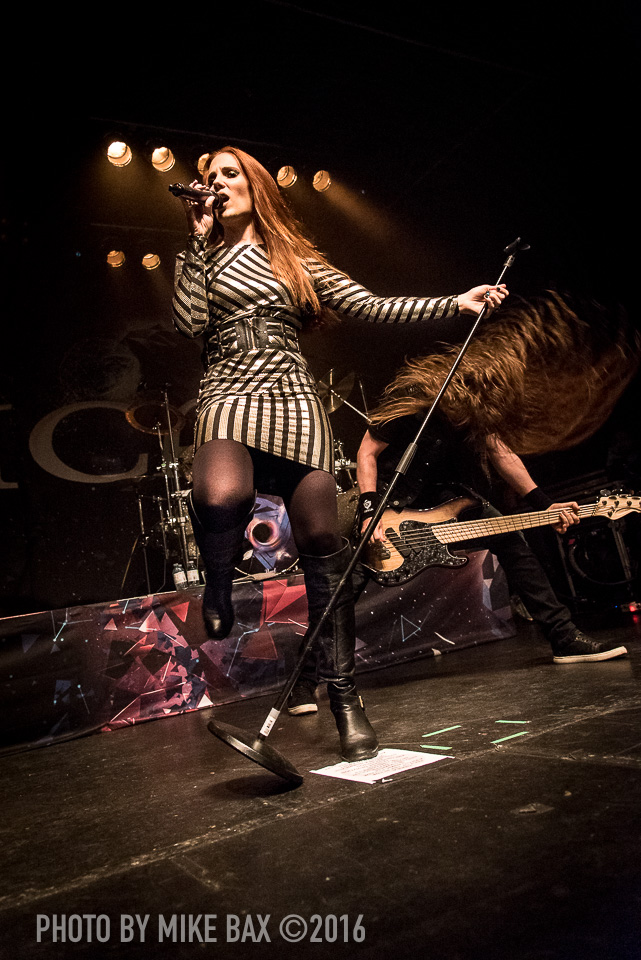 Epica returned to Toronto last night to perform a majority of material from their fantastic new album The Holographic Principle, performing 15 songs over the course of an hour and fourty minutes at The Phoenix Concert Theatre.

This tour brought Fleshgod Apocalypse, The Agonist and Atmora along for the ride, guaranteeing three hours of in-your-face metal to attendees for the low price of only $30. Fleshgod Apocalypse, an interesting melange of Italian death metal and opera, complete with an energetic pianist and a staff-wielding female vocalist delivering her opera portions live. This was my first Fleshgod Apocalypse experience; I dug what they were doing. The music was really tightly performed, and their visual presentation and stage presence were excellent. The crowd tonight was totally into them, with eager crowd surfers floating atop the floor crowd at the Phoenix for the entirety of their set.

Epica took the stage at 10:15pm, taking the stage cast in moody lighting as the intro track ‘Eidola’ blared over the venue speakers. As ‘Eidola’ ended, all six band members set in place, the front of house lights flashed on and the sweet sounds of ’Edge of the Blade’ washed over the audience. Half of The Holographic Principle was performed tonight – and without taking anything away from the Epica back-catalog, I found myself wanting for the rest of the album live. ‘The Cosmic Algorithm’ and ‘The Holographic Principle – A Profound Understanding of Reality’ felt like they NEEDED to be played live this evening and weren’t, which makes me wonder if the band will do a run of dates focused solely on the new album performed in entirety next time around.

Long time fans were happy to hear tracks like ‘Sensorium’, ‘Quietus’, ‘The Obsessive Devotion’, ‘Mother of Light’, ‘Unchain Utopia’, ‘Sancta Terra’ and ‘Consign to Oblivion’. if the band was to indeed do a tour servicing the entirety of The Holographic Principle, it would likely mean the removal of many of these fan favourite songs. The band performed tonight cast amidst a wash of beautiful lighting – often pulsing with different colours throughout the evening. I found their set-up most appealing with the band showered in a full colour like red, green or blue, along with a few harsh overhead white spot lights and minimal front lighting – setting their appearance as outlined silhouettes in front of a rich colour – their band logo glowing behind them ominously.

Mark Jansen, Coen Janssen, Simone Simons, Ariën van Weesenbeek, Isaac Delahaye and Rob van der Loo brought their A-game to Toronto this evening, far exceeding my expectations for this performance. The new material came off flawlessly. The band looked totally energized – this being only the third night into their North American tour. It was also their last night in Canada, a point Mark Jansen commented on, saying their loved playing in our Country and that they would definitely be back. Simone Simons looked utterly striking adorned in a silver and black striped dress that seemed to amplify all of the stage lightings as it refracted of her body throughout the show. Coen Janssen performed on a rotating keyboard adjacent to drummer Ariën van Weesenbeek. At times throughout the show, Mark Jansen, Isaac Delahaye and Rob van der Loo would stride up beside him and he’d rotate his keyboard to face them so they could play-off against each other.

Encore:
Sancta Terra
Beyond the Matrix
Consign to Oblivion