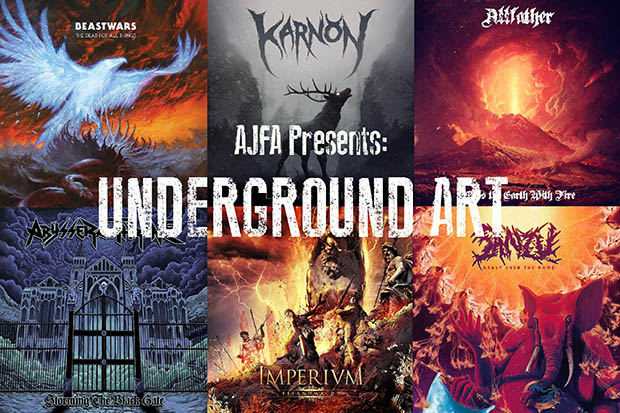 Ever wonder about the story behind the album artwork from some of your favorite underground bands? Well, thanks to a new series “Underground Art” from And Justice For Art (AJFA), you’re about to find out! In our inaugural installment of “Underground Art” – all about cover art – we look at the artwork of six different albums from six different underground metal artists that we found to be particularly EPIC! We delve into the story behind each album cover and what each cover represents. Moreover, we also get some input from the bands and cover artists themselves in order to gain a little more insight into what these rad covers are all about. After checking this out, we’re sure you’ll look at all the artwork in your album collection a little more curiously!

– The artwork for Karnon‘s Le Temps Sombre was created by the band’s own bassist, Laurent Sauvage, who is also an art director at Ubisoft. The image’s giant stag represents an ancient divinity, the lord of the wild things “Cernunnos”, which is the horned god of death and life, birth and decay, but also manhood and fertility.

The image’s background represents the world as seen by the Gauls, a symmetrical nature where our realm coexists with the Otherworld. This picture is also an allegory for humanity, standing strong in these cold harsh times.

Commented Karnon on their cover, “It is our representation of the ancestral force of the pagan imagery, in a very modern, dark and cold approach.”

– The Storming The Black Gate cover artwork was created by Mark Richards at Heavy Hand Illustration, who is known for his hyper-detailed sketch style artwork and has worked with some of metal’s biggest. Containing specific elements pertaining to the individual tracks, the art is a tribute in its own right to the dark imagery and atmosphere of extreme metal album covers such as, Emperor’s In the Nightside Eclipse and The Black Dahlia Murder’s Nocturnal, both painted by Kristian Wahlin.

Said Abysseral Throne of their cover for Storming The Black Gate:

“We wanted the artwork to express our love for black metal and the iconic imagery it represented. Working with Mark was an awesome experience, and we feel he really captured the atmosphere we wanted to achieve. He is more known for his close up character driven art, with gory details rather than more landscape based pieces which to us makes the artwork that much more impressive considering how well he captured the dark tone while still maintaining his trademark visual style.”

– UK duo Imperium released their sophomore album Titanomachy on May 7th via Ultimate Massacre Productions with artwork from Remedy Art Design in Athens, Greece. As with each of the album’s tracks, the single “The Unseen One” shares a story steeped in Greek mythology and lore. Vocalist Doug Anderson (who also plays drums for Unfathomable Ruination) elaborates, “‘The Unseen One’ is a journey deep into the abyss, where the lord of the underworld resides. Cruel, but fair, ‘The Unseen One’ was a son of Kronos, and brother to Zeus. He was the jailer of hell, who rules over the dead.”

Artist Giannis Nakos commented, “The band’s theme of Gods and Titans battling one another was inspirational by itself. Once I listened to a sample of Imperium’s new tunes I knew this had to come in powerful. I kinda felt I had to make this count, you know? At the same time, being a Greek was actually helpful too as I have a small insight of the Greek mythology, so the whole process run smoothly for me. I think the result is a cool display of the band’s vision and aesthetics and I’m glad they trusted me with such a task.”

Imperium’s Mike Alexander commented, “We didn’t have a particular vision in mind, although I did want to have a ‘true’ ancient Greek look about the artwork. I asked Andrew of Gravebane if he could recommend anyone and without hesitation he recommended Giannis of Remedy Art. From there I just trusted him to come up with something both authentic and stunning and he came up with the goods, and then some!!! We love the final piece very much, it really defines Gods and Titans and the crushing oppressive weight of Tartarus! I think it represents both Imperium and Titanomachy perfectly. It comes at you like a blast from a huge furnace, like a door opened to the underworld… which is exactly how I want it to feel like when an Imperium track erupts from a pair of speakers.”

04. Beastwars – The Death of All Things

– Beastwars worked with artist Nick Keller for the cover artwork to their 2016 release The Death of All Things. Nick currently works as a senior concept artist at Weta Workshop in Wellington, New Zealand. Since 2006, he has worked on a number of film projects including The Chronicles of Narnia, Under the Mountain, Avatar, Indiana Jones 4, and most recently The Hobbit trilogy.

He spends his days at Weta working digitally in Photoshop and in his spare time enjoys painting with traditional media, creating fantastical and surreal imagery, mainly in oils. Such projects include collaborations with a variety of bands illustrating album artwork. Nick has contributed to Volumes I and II of ‘White Cloud Worlds,’ a collection of science fiction and fantasy artwork from New Zealand.

Beastwars vocalist Matt Hyde commented, “I love how Nick Keller’s art always manages to take our music and transcend it to a far greater audience. We have truly been lucky to work with such a great man and friend, and he became another member of Beastwars in the six years it took us to make this trilogy. Always there for us and always one of the first people we’d share our recordings with, especially on this record.”

05. Allfather – Bless the Earth With Fire

– The image on the cover of Allfather‘s album Bless the Earth With Fire is one of a series of paintings of Mount Vesuvius by 18th century painter Joseph Wright of Derby. The original idea was to use John Martin’s ‘The Great Day of His Wrath’ for the album, but the Tate gallery own the copyright for that.

The band commented on the artwork, “We didn’t have the budget to work with the kind of visual artist we would have liked to collaborate with on the album cover (people like Dominic Sohor and Stag & Serpent spring to mind), so the art had to be put together for free. The title Bless the Earth With Fire refers to man’s selfish and destructive nature, both in destroying his fellow man and the earth, and in provoking the wrath of gods and natural forces. A fuck-off big volcano seemed like a pretty apt way of summing that up visually.

“The epic scale that Joseph Wright uses in his Vesuvius paintings depicts humanity as being completely dwarfed and helpless in the face of the erupting volcano, which is exactly the way it should be. The only edits to the original image were a square crop and a red cross-process done in a photo editor. The font for the band logo and album title is free and open source. Professionally I’m a librarian so it was important to make sure that all the elements of the album cover were free to use and out of copyright, partly to cover our own arses, but also because as a DIY band we feel it’s important not to rip off other artists. We’re hoping next time we will have a bit of a better budget to get some original artwork done.”

– Sanzu released Heavy Over the Home via Listenable Records which features cover artwork created by Zachary Andrews, the band’s own vocalist. The artwork, according to Andrews was, “made to be a reflection of the state of the band as a whole as well as on a personal level. During the recording process for Heavy Over the Home which itself was extremely intense and chaotic, there were deaths in the band members’ families, strained relationships and members were also expecting babies.”

Zachary Andrews elaborates further by noting, “Originally we had a moody, black and white photo for our cover for HOTH but it wasn’t until only weeks before revealing it to the public we decided to go in the complete opposite direction. The concept of some primordial beast tearing everything apart, acting out a cosmic tantrum… This is were our heads were definitely at, at the time!”

“And Justice For Art” – The Book
– If you want to know more about the making of some of Metal’s most iconic album covers—including Black Sabbath’s 13, Metallica’s …And Justice For All, Sleep’s Dopesmoker, Obituary’s Cause Of Death, Opeth’s Heritage, Neurosis’ Times Of Grace, Skid Row’s Slave To The Grind, and more—check out the book “…And Justice For Art: Stories About Heavy Metal Album Covers” and dare to explore this fascinating topic even further. The book is available exclusively at: BigCartel.