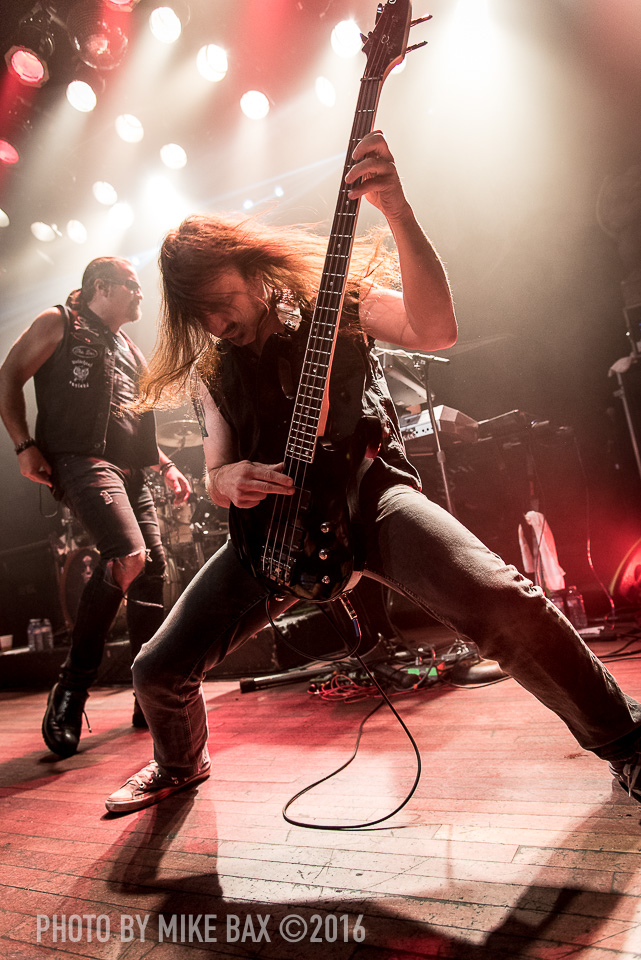 “It’s Monday night, right?”
Russell Allen – in disbelief to the screaming crowd before their encore.

There was lots of live music to choose from this evening in Toronto. Sigur Ros was playing a sold out Massey Hall, Adele was playing a sold out Air Canada Center show and Symphony X had a line-up of eager fans coiled up in front of the Mod Club Theatre an hour before the doors opened for a show that had only a handful of available tickets left available in the hours leading up to the show.

Last year, New Jersey five-piece metal act Symphony X released Underworld an album I consider amongst the best of 2015. This evening in Toronto for the first time since its release – Michael Romeo, Russell Allen, Michael Pinnella, Michael LePond and Jason Rullo brought the songs from Underworld to Toronto. I didn’t know it prior to entering the venue that the band was playing Underworld in entirety, attaching a few other songs to the evening to round out their performance.

Knoxville, Tennessee’s Gone in April performed as direct support, and Toronto’s Pyramid Theorem opened the show. I’d never heard Pyramid Theorem perform before, but after a few songs you could almost feel the people in the crowd around me getting their music. Lots of smiles, nods of approval and bobbing heads as the four-piece band wove their way through a half dozen original songs laden with some intricate drum and heavy bass guitar work. The high pitched vocals (not at all the sound I’d imagined would come out of the vocalist’s lungs just by looking at him) worked exceptionally well over their material. Pyramid Theorem are putting the touches on a new album that I definitely want to check out based on their performance.

Gone in April is a six-piece band blending elements of metal, symphonics, female harmonics and grizzly male vocals but with an overall emphasis on intricate guitar licks. They took the stage at around 9PM and performed nine songs to a room that pretty much full to the back by the time they were halfway done playing. Prior to this evening I’d never heard them play before. Overall, Gone in April was a good fit, offering up plenty of pummeling riffs backed by a tight drummer, dual guitarists and a wicked six string bassist.

Symphony X got off to a rocky start; going on a bit late while stage crew and venue staff tried to sort out the vocal feeds for the band. ‘Nevermore’ was unfortunately performed with weak to non-existent vocals – and after the band finished that first song everyone the crew quickly figured out the problem, received a thumbs up from singer Russell Allen as the band got right back into the swing of things with title track ‘Underworld’.

Towards the end of the show, Russell introduced everyone in the band in singled out fashion as they performed, and then mimed hitting a baseball out into the crowd as the song came to an end. It was a fine metaphor for the night as the band really did hit this one out of the park. After their initial set finished and they went back stage – the entire room erupted with cheers and a growing chant for ‘Odyssey’ grew to an almost deafening proportion. This was a not-so-subtle ask for the 25-minute album closer ‘The Odyssey’ from the 2002 album of the same name – a fan favourite song. I’m not sure if the band even considered playing it – If they did, it would have trumped us getting to hear ‘Legend’ – thus I’m glad they stuck to their guns for this evening.

This show was an utter joy to behold. A good crowd. A great band. Good energy coming off the crowd throughout the set. Lots of fans were singing the lyrics back to the band as they performed. There were so many warm moments over the course of the 100-minute performance tonight. Russell shook hands with numerous fans throughout the show and the entire band came to the front of the stage and either bumped knuckles or shook hands with the audience before taking a well-earned bow.

For long time fans, this evening may have been a bit challenging. Symphony X only performed 3 songs that aren’t on Underworld – ‘Serpent’s Kiss’, ‘Of Sins and Shadows’ and ‘Set the World on Fire (The Lie of Lies)’, which means the band didn’t really get to service their back catalog like they might normally. For the most part I believe Underworld to be widely regarded as one of the stronger Symphony X records, if not THE strongest in their history. I certainly felt like everyone left the venue elated with what they had just seen, but I guess I could be stilted on that because I personally like Underworld so much.

At the end of the performance, the band relayed more than once how happy they were to have played Toronto, and the response that they got. On a Monday night.

Setlist:
(Overture)
Nevermore
Underworld
Kiss of Fire
Without You
Charon
To Hell and Back
In My Darkest Hour
Run with the Devil
Swan Song
The Death of Balance / Lacrymosa
Serpent’s Kiss
Of Sins and Shadows

Encore:
Set the World on Fire (The Lie of Lies)
Legend