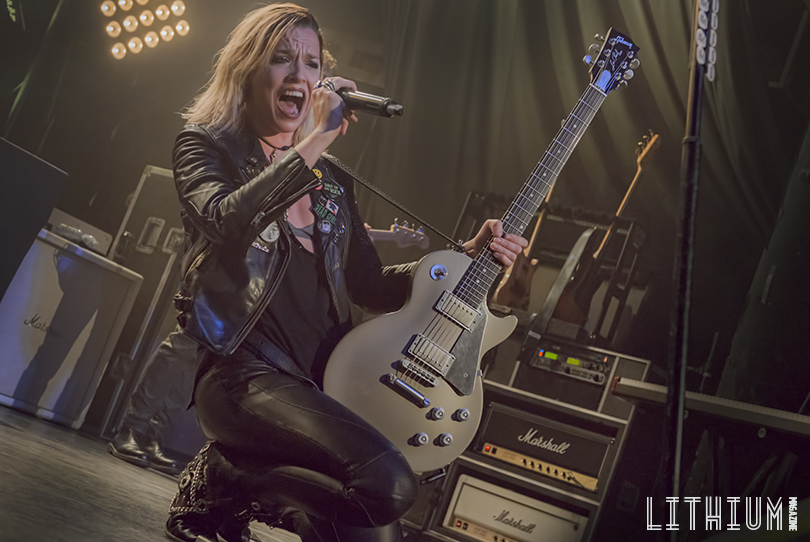 It was a night to celebrate some of the best of women in rock at the Phoenix Concert Theatre earlier this week as Dorothy, Lita Ford and Halestorm took to the stage to rock out for one seriously packed house. Judging from the last time I had the privilege of seeing Halestorm live, I knew that lead singer Lzzy Hale, her brother drummer Arejay Hale, along with guitarist Joe Hottinger and bassist Josh Smith would deliver a show that all the ‘daughters of darkness’, ‘freaks like her’, and those ‘at the rock show getting high on the solo’, would not soon forget.

There is something to be said about musically talented families and the Hale siblings are up there at the top with the best. Lzzy Hale has proven herself numerous times over as one of the most formidable and powerful female vocalists in the world of rock. Likewise, Arejay Hale is one of the most coveted drummers in the biz as well grabbing awards and top accolades for his impressive skills on the skins. Seeing a Halestorm show live is watching magic happen, magic that is electric and potent. Their show earlier this week surely did not disappoint.

They kicked off their set with “I Get Off” followed by the anthem for every proud and true outsider out there, “Freak Like Me” and then the delightfully frenetic “Apocalyptic”. Halestorm is the epitome of great Americana rock best enjoyed while dancing, head banging, and nursing a cold one. “Amen” was a new song to me that is delightfully sexy, devious, and infectious. It’s a great song to see performed live and an easy new favorite.

Halestorm played a number of hits beloved by fans including their hits “Mz. Hyde” and “Rock Show”, before slowing it down for an intimate piano solo by Lzzy to “Dear Daughter” dedicated to daughters out there who dared to dream. She told the story of how her parents were terrified of letting their daughter enter the nasty and unpredictable world of rock music but they nervously encouraged her and never told her no. With the quaint and delicate moment completed, Halestorm were quick to kick the energy back up to high with their homage to rock legends Sabbath, Lemmy, and Zeppelin with  “I Like it Heavy”.

Following that, it was the perfect time for Arejay to shine doing what he does best – play with the crowd while rocking out on the drums. His drum solos have always been on the side of epic and this time around was just as expected. He drummed his heart out for the crowd and even took his act closer to the fans by donning a portable drum kit that allowed him to walk around the stage and interact with the audience. Back at his stage-stable kit, Arejay presented the signature element to his drum solos, something that everyone anticipates – the Big Drum Sticks. Drum sticks that are more like three-foot long batons that he used to play with as much ease and precision, along with the same drum stick flare, that he would with normal sticks.

Back on stage, Lzzy Hale gave the audience a choice – should they play a few more songs then make a show of leaving the stage while the crowd gets antsy and restless, then come out again pretending to be shocked a few minutes later like they’re surprised that the crowd wants to hear more songs, so should they just keep playing through to the end. The audience’s choice was clear and Halestorm kept the party going with “I Am the Fire”. They drank a toast to the crowd before launching into “Here’s to Us” before diving into their Whitesnake cover of “Still on the Night”. They closed the evening off with their hit “I Miss the Misery”.

My only disappointment with the set was that they didn’t play my personal favorite “Daughters of Darkness” but that’s just a small quibble on otherwise amazing night of rock and roll. Once again, Halestorm knocked it out of the park. Great job, guys!

I Get Off
Freak Like Me
Apocalyptic
Loves Bites (So Do I)
Mz. Hyde
It’s Not You
Amen
Rock Show
Unapologetic
Dear Daughter
I Like it Heavy
Drum Solo
I Am the Fire
Here’s to Us
Still on the Night (Whitesnake cover)
Mayhem
I Miss the Misery