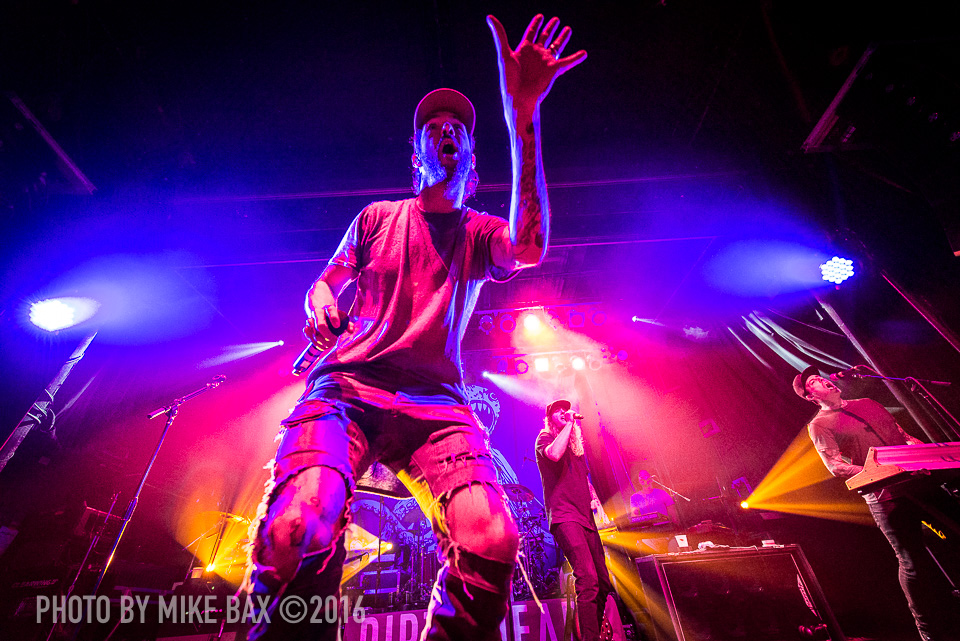 Things I learned tonight: 1. Dirty Heads have a huge, dedicated following. 2. The band’s young, prominently female fan-base are all lookers and seem to enjoy copious amounts of liquor. 3. The band can indeed perform really well live, many of their songs sounding better and heavier than their studio representations. 4. Dirty Heads is apparently weed-music.

I got into the already wedged venue in time to hear the last three songs from RDGLDGRN, a Washington DC three-piece band with a sound that pulls from hip hop, hardcore and alternative genres of music. RDGLDGRN, which is an amalgamation of Red, Gold & Green, felt like they were channeling their inner Public Enemy, with Green (Pierre Desrosiers) at the security rail, his upper body leaning into the crowd for a chunk of the songs I saw, belting his vocals directly into the faces up front as his bandmates performed behind him. What I got to see what pretty damn good.

Red Bull recording artists New Beat Fund took the stage at 9pm, professed that they were high, and then worked their way through 8 songs, including a Sublime cover mashed together with ‘Last Caress’ by the Misfits (a track that most people in the audience didn’t seem familiar with). There were moments of greatness from New Beat Fund – some of the tracks they played sounded pretty tight, but there were moments of muddiness that may have been part reefer and part me not knowing the source material particularly well. There was lots of high jumping from everyone except the drummer (obviously) as they played.  The vocalist went down to the crowd at the rail a few times and got sweaty with everyone up front. And the audience seemed really into them, which, at the end of the day, is all that matters.

At 10pm, the house lights went down and Jon Olazabal, Shawn Hagood and Matt Ochoa took their places towards the rear stage, Dustin “Duddy B” Bushnell and David Foral took their guitars at stage left and right and Jared “Dirty J” Watson lunged to the front of the stage to sing the first lyrics of ‘Burn Slow’ crouched in towards the audience under almost no lights. Aside from a few acoustic numbers tonight, Watson never really stopped moving, lunging and striding about the stage waving his hands and spouting lyrics to cheers of glee from the Toronto audience.

Dirty heads worked their way through a kinetic 21 songs, touching on their four previous releases, and cuts from their latest self-titled 2016 album. At times, Dirty Heads come off as a myriad of genres. I heard elements of hip-hop, metal, rock, reggae and alternative over the course of their 90-minute performance. The band commanded the stage for the duration of their show, leaving the audience sweaty and spent by the time they wrapped things up with their excellent new track ‘That’s All I Need’.

This was a great show. Good energy all around. The band will totally need a bigger venue the next time they roll into town.