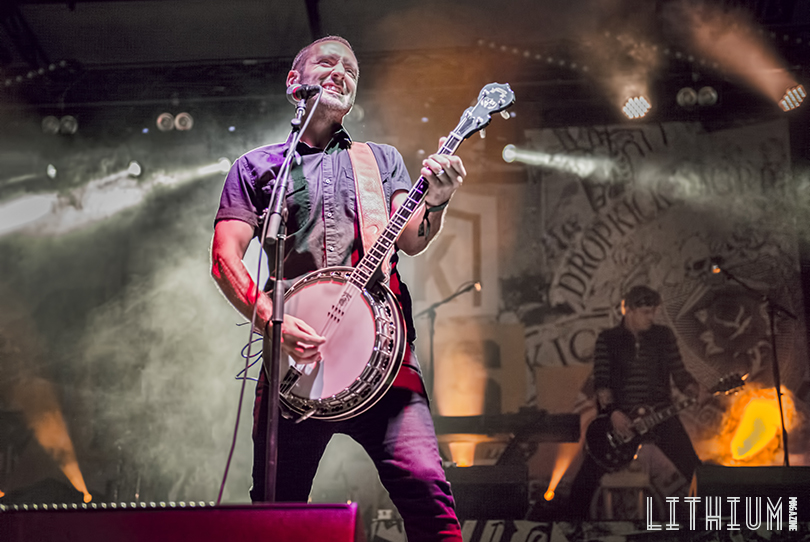 Toronto cover band Dwayne Gretzky paid heartfelt tribute to the Tragically Hip with a set of covers that saw that saw the band’s vocalists channeling Gord Downie’s on-stage mannerisms. Explosions in the Sky turned in a loud but incredibly boring set of shoegaze-influenced post rock songs.

Veteran Vancouver indie rockers Limblifter had to pause their set after drummer Eric Breitenbach “destroyed” his kit a couple songs in. Frontman Kurt Dahle jokingly said they were playing a new song before launching into ‘Screwed It Up’ from their first album.

Matt Mays gave a shout-out to Dartmouth, Nova Scotia during his loud set of anthemic indie rock tunes with the band wrapping things out by jamming at the end of ‘Cocaine Cowgirl’. Drive-by Truckers‘ Patterson Hood kept up the banter with the audience during their soundcheck and commented that it was fitting that the alt-country act was playing the site of a battle between the US and Canada, joking that he planned to move to Canada if Donald Trump is elected president.

British singer James Bay wrapped up the first day with a set that saw him playing by himself throughout and holding the audience spellbound with his alt-rock and folk-pop songs, finishing the night with his hit ‘Hold Back the River’ during the encore.

Lush‘s Miki Berenyi joking about bringing the rain from the UK became a running joke through the Brit-pop band’s set that saw them play a punked-up version of ‘Hypocrite’ and finished their set with ‘Lady Killer’.

Saskatchewan’s Sheepdogs brought the sun just as their set was wrapping up and the band kept the crowd rocking with their classic-rock-influenced tunes and stellar harmonies. Okkervil River provided a great change of pace with their folk tunes and Whitehorse‘s Luke Doucet show why he’s one of Canada’s best guitarists. He jokingly said that he and bandmate/wife Melissa McClelland welcomed their son nine months after she wrote a “sexy song”.

Barenaked Ladies music admittedly lost some of its’ charm without Stephen Page but the Toronto band still put on an entertaining set that saw them play all the hits, including ‘One Week’, ‘Pinch Me’, ‘Brian Wilson’ and leading the crowd in a sing along of ‘If I Had a Million Dollars’ before wrapping things up with a medley of pop music from the last 40 years that included everyone from Rihanna to David Bowie.

Ween showcased the same melange of sounds that’s helped Dean and Gene Ween to develop a sizable cult following, varying from punk to country, jazz and metal. Guided by Voices musical ADHD  was on display as they seemingly played dozens of songs of Beatles-esque songs in a short time.

Vancouver’s The Belle Game kicked of the last day of Turf with their dream-like, electronic-influenced indie pop tunes. Sun K kept the crowds entertained with their roots rock. New Zealand’s Marlon Williams even trotted out a bluegrass tune at one point during his set.

The New Pornographers had the crowd dancing along to their indie pop tunes.  The Hold Steady played their third album Boys and Girls in America in its entirety, showing that it still holds up well 10 years later.

Edmonton country artist Corb Lund played an entertaining set that included a hilarious song about falling in love with an Albino woman.

Matthew Good kept up good spirits, despite suffering from sun blindness because his son had destroyed his sunglasses. He played songs from his long career including ‘Hello Time Bomb’, ‘Apparitions’ and ‘Load Me Up’.

Jimmy Eat World made a triumphant return to the city, kicking off their set with ‘Bleed American’ and debuting several songs from their forthcoming ninth album Integrity Blues, including ‘You Are Free’.

Toronto’s Rheostatics put on an entertaining set that overlapped with headliners Death Cab For Cutie. Toronto was the last stop on the Seattle band’s 18 month tour and they pulled out all the stops, starting with ‘The New Year’. The entire field went pin-drop quiet when Ben Gibbard played ‘I Will Follow You Into the Dark’. A stunning take on ‘Transatlanticism’ wrapped up an amazing three days of music.