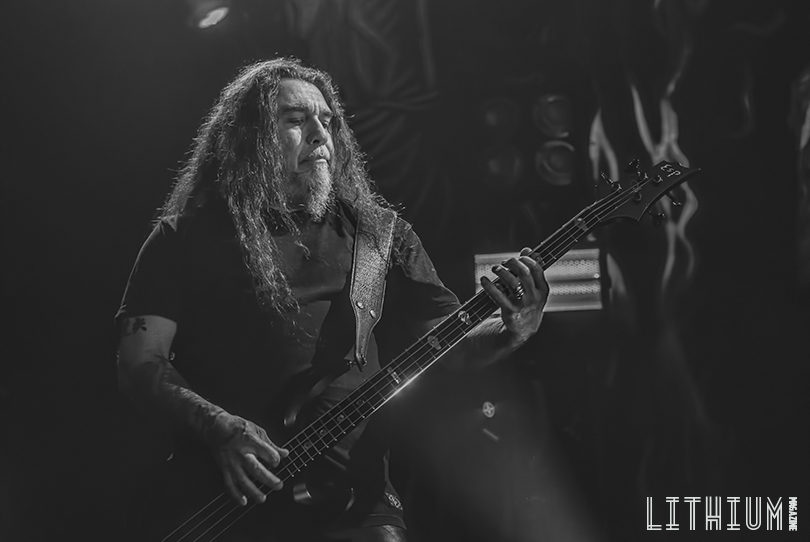 Toronto Metal fans got their senses bombarded at Sound Academy by half of the big four.

Slayer rolled into town on Monday night, bringing their Repentless tour along with thrash titans Anthrax and Death Angel to the recently renovated Sound Academy.

California thrashers Death Angel started the night off by promoting their eighth studio album, The Evil Divide. Front man Mark Osegueda fed the fire with his high energy and aerial displays. Guitarists Rob Cavestany and Ted Aguilar thrashed together on stage and created an excellent metal guitar duo.  Death Angel clearly proved to be a great start to this night of metal.

Anthrax, who released their eleventh studio album, For All Kings, on February 26th of this year, was up next. Guitarist Scott Ian is a favorite of mine to watch. His exuberant energy fueled the fire. Drummer Charlie Benante was perched up high pounding out the beat, with Jonathon Donais on lead guitar and Frank Bello on bass.  Singer Joey Belladonna took a moment to grab a photographer’s camera and snap a few pics from the stage, and to the crowd’s delight they turned out great.  The finished their set with “Indians” when Joey asked, “Toronto! Do you like thrash metal? For this song, all you gotta do is fucking Move! WAR DANCE!” and the mosh began.

Finally, it was time for the headliners.  Amid chants of “FUCKING SLAYER” the lights went out and the crowd went ballistic as the curtain dropped.  Right from the get-go, Slayer hit us with “Repentless”, a song that speaks volumes to the world today.

Arrogance, violence, world in disarray
Dealing with insanity every fuckin’ day
I hate the life, hate the fame, hate the fuckin’ scene
Pissing match of egos, fuck their vanity
Ain’t got the time, I don’t want anything from you
Feeding on my tolerance is all you fuckin’ do
No looking back, no regrets, no apologies
What you get is what you see

Blinding orange, red, and green strobes accompany the show. Tom Araya and his subsonic bass caused our ribcages to vibrate from the inside out.

Kerry King’s guitar resembles a battle axe and he had industrial sized chains hanging from his waist/ Gary Holt, who also plays guitar for Exodus, was moving about the stage and treating us to some wicked guitar riffs. And the heartbeat of the band, Paul Bostaph pounded the shit out of his trademark double bass drum kit.

The moshers and crowd surfers couldn’t contain themselves and one by one they went over the barricade before reaching safety in the hands of security. It was quite the spectacle but, then again, what would a Slayer show be without a mosh pit?

Slayer is and has been a personal favorite of mine for a lot of years, and once again they didn’t disappoint.  They are one of those bands that give me a warm and fuzzy feeling all over….and leave my ears ringing for a few days after the show.

When the show ended, the crowd of thousands made their way to the parking lot in a sea of black T-shirts and tattoos while chanting “FUCKING SLAYER”

Ahh, it was a GOOD night!

The tour kicked off in Cleveland September 9th and winds through North America wrapping up in El Paso Texas .