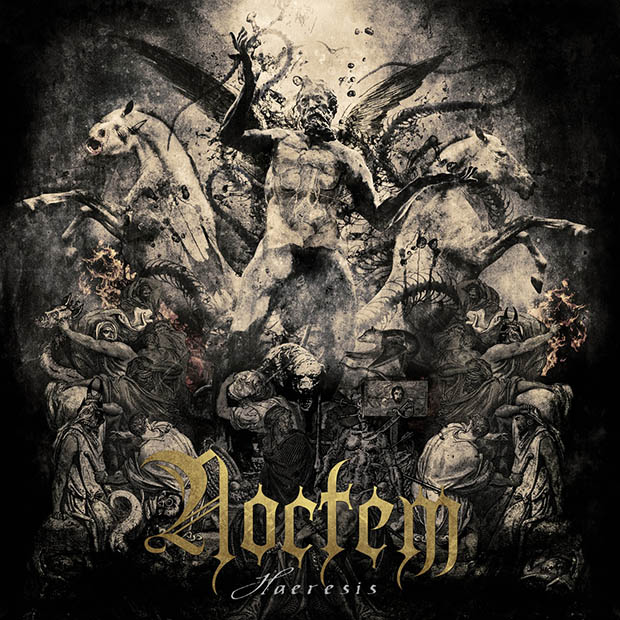 Noctem’s upcoming full-length, Haeresis, is all around a great extreme metal album but one song in particular grabbed me by the neck and slammed my head against a wall. That track is entitled “The Submission Discipline” and I want to share with all of you in detail how this song kicked my ass.

The intro was composed, perfectly-laced with an acoustic, ascending flamenco guitar line and what I believe is Latin being spoken on top of that. From there, the riff ramps up to full chainsaw distortion with the bass and drums cracking the mix to further punctuate the riff. Then, with a sudden break down and crash cymbal stop, the song kicks into extreme metal mode via blast beats, lightning-fast speed picking, and vocals so brutal that it would scare The Grand Inquisitor into submission!

The song changes tempos like a boxer changes his punches, so you’re getting your ass kicked at different speeds. In addition to blast beats, there’s some good old fashioned double bass and some d-beat action taking place. The vocalist keeps it interesting as well by varying the pitch of his growls along with some blood curdling screams thrown in for good measure. There isn’t a guitar solo, but with a song this intense, there’s really no reason to clutter up the mix.

The album notes state that Haeresis conceptually delves into the dark history of their home country of Spain with the artwork depicting scenes from the Spanish Inquisition. Now, I haven’t seen said artwork, but after listening to “The Submission Discipline” I would say the music will have no problem complimenting that visual.

Check out the song “The Submission Discipline”