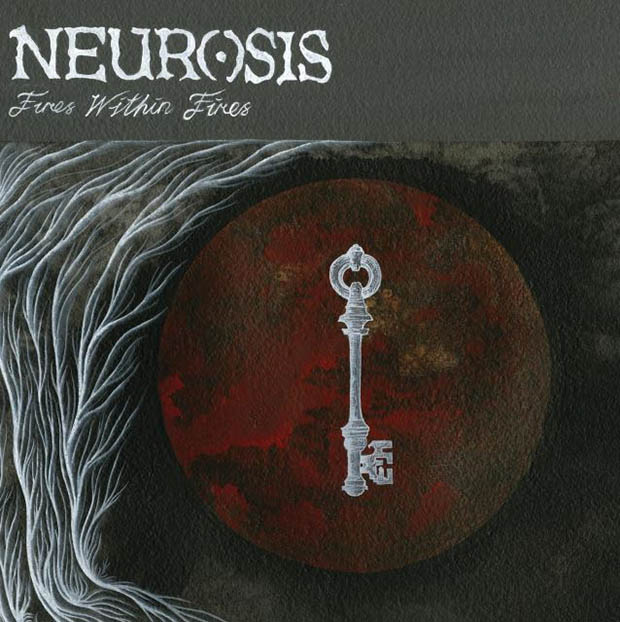 For many people, Neurosis is one of those bands that are one of the pillars of metal, and over the last 30 years their influence has quietly and solidly taken hold, bracing up the various aspects of what it means to be experimental and creative in the realm of heavy music. Everyone I’ve ever known has known this to some extent, myself included. So it’s with some trepidation that I enter into a review of a band that have been together longer than I’ve been alive.

Something that immediately becomes clear upon sitting down to Fires Within Fires is how gentle it can be, often muted and downplayed bass supporting likewise executed guitar work. Though this is often played for sinister build up before the crescendo of vocals and drums, it doesn’t rise until absolutely necessary, and when it does, it’s riveting stuff, demanding your attention and bulging in the neck vein with robust tone and face melting aplomb.

There is frothing rage, but it never needs to drip from the mouth. It’s a deliberate act that the band keep the rage bridled and sonic levels in check. Because of this deliberateness, this measured and steadied pace, it takes on a hypnotic quality that few other releases can boast about. This is one of those rare occasions where less is more, and yet the less itself is instead something far more dark and deep than most other acts can manage to get across to the listener.

It’s a brilliant little album, I say little because with only five tracks totalling just over 40 minutes, it’s a record that feels more like a singular idea rather than a medley of separate ones. What’s relieving is that it is a bloody good idea, and has accomplished musicians at the helm who are able to execute a vision of something dark and miserable without losing sight of the fact that a release should also be engaging and thrilling. And the band have done this in spades, without a doubt.

Check out the song “Fires Within Fires”