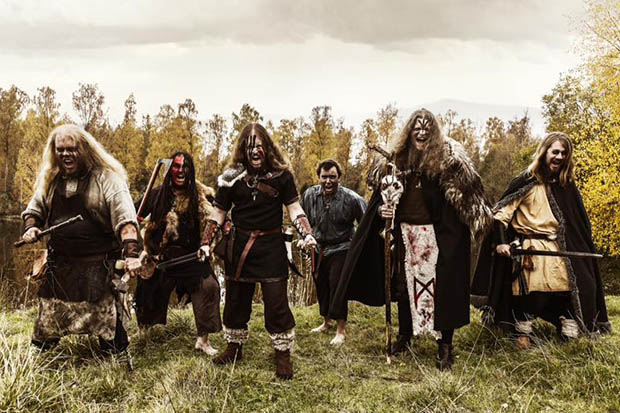 The Swedish Viking Metal band, Grimner, are tearing up the scene with their latest helping of melodic folk metal tunes, entitled, Frost Mot Eld. With this project being their second full-length album, the group’s brand of music is beginning to spread like a wildfire, already engulfing Europe and now spreading over to American fans. In this exclusive interview, vocalists Marcus Brattberg and Ted Sjulmark speak out on the band’s new album, tour, their theatrical shows and more.

Now I have heard various versions of metal. Heavy metal, thrash metal, dark metal, hair metal, even rap metal. But this one is a new one for me. Your music has been described as, Folk/Viking/Metal. Could you please explain this style?
Marcus Brattberg (clean vocals/guitars): Folk/Viking metal could come with different permutations. Since we find our own style pretty hard to define, we had to include many genres to describe the music in order to cover it. The music as a whole has its basis in metal, and several elements have been added to that basic recipe in order to develop it into what you hear when you listen to Grimner. The “folk” element is added by the melodies we use, and the instruments we find vital to relate the sound of Grimner. We take inspiration from many different types of folk music, where the Swedish variant is only one part of many. The “Viking” element is expressed through our lyrics and show on stage. We sing mainly about Viking mythology, and if you go to one of our shows, you can clearly see that our outfits are inspired by the same thing.

Give your thoughts on the new album, Frost Mot Eld; are you pleased with the reception it has garnered since being released?
Marcus Brattberg: Very much so! We have not experienced this much feedback and praise for anything else that we have ever done. It is a very nice thing that people appreciate this album so much, since it is the album that we are happiest with. We have recorded two videos to accompany the album as well, which have received great feedback.

Check out the song “Midgård Brinner”

As far as the music goes, who does the majority of the writing, it is a group effort or mainly one particular member of the band?
Ted Sjulmark (harsh vocals/guitars): I write the music in the band, and Marcus writes almost all of the lyrics nowadays, which makes for a great combo when we discuss how to combine the lyrical concepts to the atmosphere of the music. When Marcus and I are done with our parts, all of us in the band discuss details and minor changes to give the songs even more life, until we feel that everything is as good possible.

I do know that Grimner has a huge following in Europe, but what about America. Do you feel your style of music has been received well by the American fans?
Ted Sjulmark: I know that we have more fans in Europe than in the U.S., but the music has been very well-received by the American fans that we have. We realize that folk metal and such styles of metal aren’t very big in the States, since almost all Americans we have talked to about Grimner, in interviews and such, haven’t heard of this kind of music before. Hopefully that will change, though!

I was watching the latest video from you guys, “The Home of Darkness”. Seemed like you guys had a good time with making this video. Am I correct in saying so?
Marcus Brattberg: We did have a good time, even though it took a long time to record it. We started pretty early in the day, but we recorded the scenes around the fireplace at night. It has never been a problem for us to work long hours together, as we enjoy each other’s company. We worked with Magnus Ewald once again, who always has a huge engagement for recording these kinds of videos.

Ted Sjulmark: Indeed, Magnus is a great guy to work with, he always does a thorough and awesome job. It was great fun, as Marcus said, although not painless. We basically had to wade through deep mud quite a bit into the forest, but thankfully, we were prepared. One of the actors almost lost a shoe to the muddy deep though, ha-ha. Dangerous stuff! 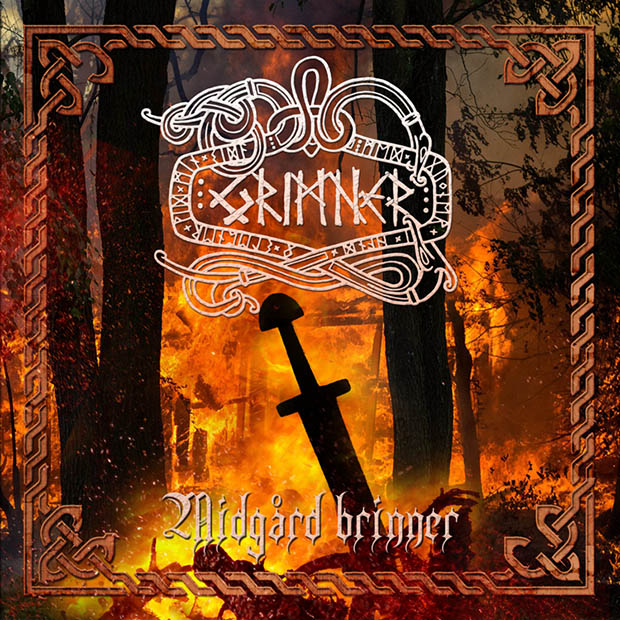 Do you guys wear the Viking attire while playing live, and are your live shows theatrical?
Marcus Brattberg: We always have and always will. It adds a little extra to the live shows. We think that not only should the music be good, but when you attend a show, you want to see something visually exciting. We have tinkered around with different things, and we have plans to add things in the future. Since our flutist Johan can breathe fire among other things, we have used that skill live.

Ted Sjulmark: True, we will never abandon our outfits, even if they may change in the future to keep the visual aspect fresh and exciting.

What can a fan expect when they attend a live Grimner show?
Ted Sjulmark: One hell of a party! We always give 100 percent wherever we play. You might say that we challenge the audience to go crazier than ourselves, ha-ha. We at least promise you will be thoroughly entertained! Hopefully we can come to the States and prove ourselves soon! Thanks very much for the questions!

Check out the song “Mörkrets Hem”