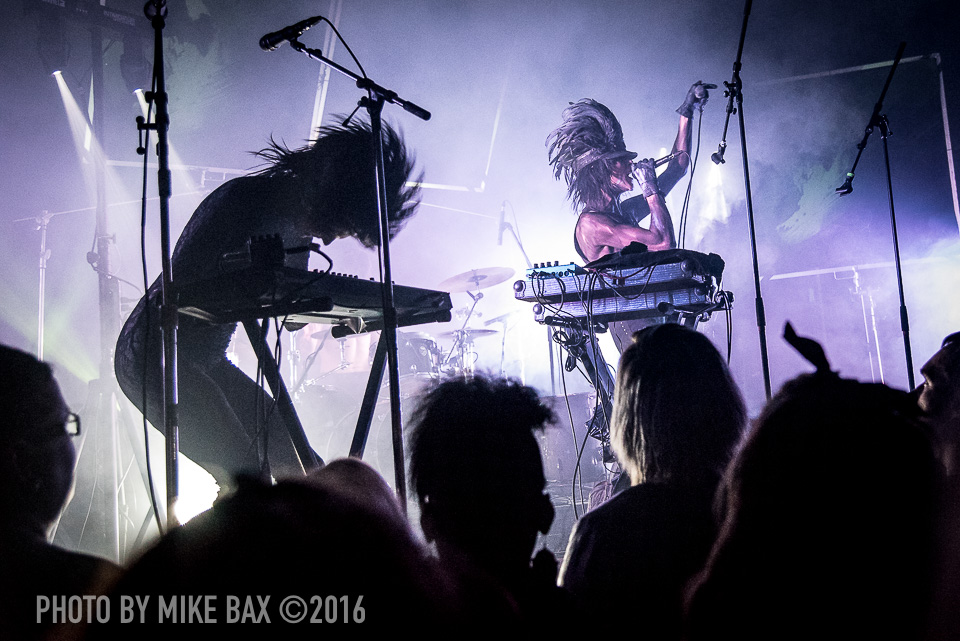 Not always, but most often, I can tell if I’m destined to see something interesting within the first few minutes of walking into a concert venue. Upon entering the Mod Club Theatre on this evening, I quickly saw people with mohawks, heavy black eyeliner, Doc Martins shoes and boots, latex pants, unitards, and other sundry skin tight apparel (so flamboyant that I couldn’t begin to guess at its origin of retail). Five minutes in the venue and knew this was going to be an evening of visuals.

At shortly after 10pm IAMX (The Sneaker Pimps’ Chris Corner) strutted onstage with his band as they took their places amidst a battery of stage front microphones and electronic machinery. I could hardly see the drummer, I think a male in a whitish military looking jacket. The two lovely girls on either side of Corner were adorned from neck to toe in skin-tight, semi-opaque black unitards, handling the keyboards, keytars, guitars and background vocals. Chris Corner himself was clad entirely in black, a sleeveless top with his arms and face somewhat obscured by black and white stage makeup, adorned with an impressive feathered head-dress on his head. Chris said hello, mentioned how happy he was to back in Toronto and quickly jumped into ‘No Maker Made Me’.

Immediately, the sound quality struck me. It was loud, but not an aural bombarding like so many shows tend to be. There was minimal distortion on anything coming off the stage. What really took me was the vocals – so clear and concise it made me wonder if they were genuinely being performed live!! There was enough deviation in the vocals as Corner moved about while singing to validate the integrity of the performance and I write this as a testament to the musicianship and the sound engineer on site – one of the best live representations of material I have seen in a while.

Apart from a few singles over the years since the demise of the Sneaker Pimps, I am largely unfamiliar with the IAMX back-catalog. The debut of title track ‘Everything Is Burning’ was performed live this evening as the only new song I recognized (Everything Is Burning got released September 9th). The rest of the set was material from their IAMX back-catalog, a number of the songs familiar to me because they have been remixed on the second disc, included with Everything is Burning.

There were four mid-sized square black canvases on risers adorned around the back of the drummer — two immediately behind the drum kit facing the crowd and two on either side of the drums at a 30-degree angle inwards with visuals being projected on them throughout the performance.  A heavy bout of dry ice and smoke was coughed onto the stage throughout the show, enough that unbeknownst to the band the staff out front were fanning their faces and talking between themselves about maybe keeping the front door open to try and let it dissipate a bit. Within the venue, it made for some wonderful ambiance – bringing a cloud to visuals on the four screens and the rear lighting utilized for the majority of the performance this evening.

The final word: IAMX was a welcome surprise. An evening of great music presented in a most theatrical fashion in an intimate setting.  It’s been over twenty years since I have seen Chris Corner perform live – he’s only gotten better during those two decades.

Setlist:
No Maker Made Me
Happiness
Nightlife
The Unified Field
Everything Is Burning
Screams
You Stick It in Me
Spit It Out
Insomnia
North Star
Aphrodisiac
Kiss + Swallow