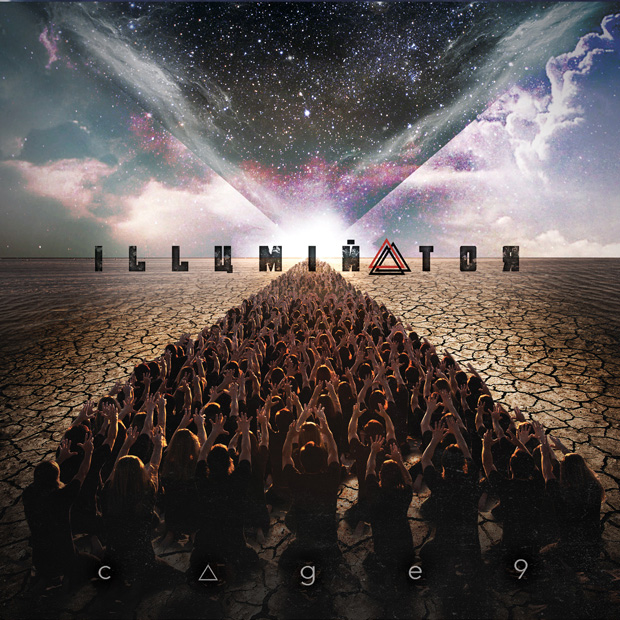 23 years and 9 albums under their belt, Cage9 have had a long and relatively successful career, so it begs the question, why have I not heard of them before? It could be that they have not received the attention they perhaps deserve in my native UK as I have not once heard a song played in a club or seen a CD making the rounds on a jukebox. Despite this, they have caught the attention of some of rock and metals heavyweights such as members of Korn and Megadeth, as well as sharing a stage with the likes of Ozzy Osbourne.

Fronted by Panamanian native Evan Rodaniche, Cage9 seemlessly mix classic rock, hard rock and metal creating a sound that, of course, has been heard before in many bands, but manages to work exceptionally well for them. Illuminator builds gradually with the opening track “Open the Sky” having a groovy nu-metal feel that, truth be told, is very radio friendly with hypnotic and at times auto tuned vocals complimenting the sound of the song. “Gallows” follows this tone with easy to sing choruses accompanied by guitar riffs that, while almost verging on being a mess at times, somehow work like a dream.

“Starry Eyes” opens with a futuristic voice referring to mankind’s domestication by technology before kicking into a similar sound to the previous tracks whilst still managing to stand apart. Following this “Everything You Love Will Someday Die” starts with an acoustic guitar riff before stepping up to their hard rock sound and once again a great sing along chorus.

Up next is my personal favorite on the album (although it is difficult to have to choose one), “Oscuro”, which translated from Spanish, means Dark. It starts off with an incredibly chilled vibe with Rodaniche’s harmonies backed by the sound of a piano before kicking back into the metal sound Cage9 have demonstrated a true knack for before returning to Rodaniche’s emotional vocals and piano backing. Illuminator continues the high standard all the way to the end incorporating the seamless mix of rock styles concluding with the title track “Illuminator”.

In my 34 years I have discovered many bands that have had long careers before I have had the opportunity to sample their music, some have disappointed on a level that they have sunk back into distant memory where they are best left whilst others have encouraged me to hunt out back catalogs. Cage9 is the latter in this instance!

Check out the track “Everything You Love Will Someday Die”