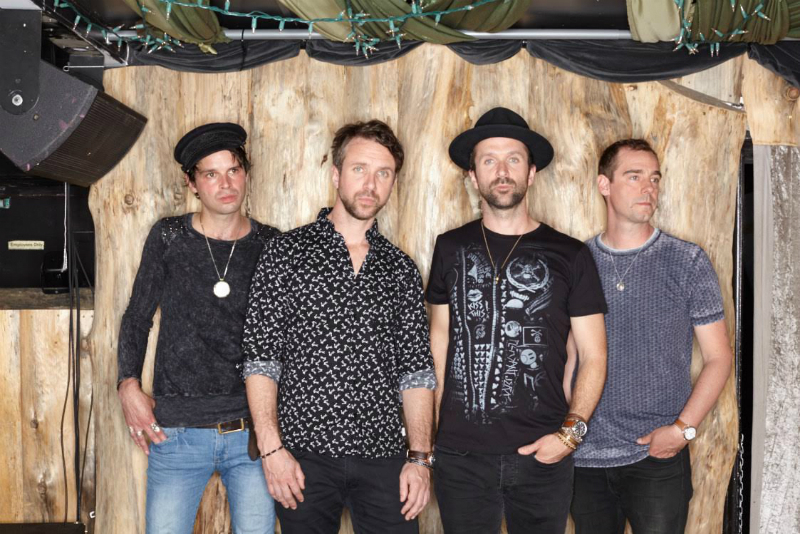 An Interview With John-Angus MacDonald Of The Trews

Canadian rock band The Trews are set for their latest release, Time Capsule. Available September 9 via HOME Music / Entertainment One, the 20-track collection gathers sixteen of the band’s biggest hits and fan favorites including:  Not Ready To Go and Highway of Heroes.  Also included are four brand-new recordings, one of which is their new single Beautiful & Tragic co-written by Serena Ryder.

The Trews are one of Canada’s most successful rock bands of the past decade, earning 16 Top 10 Rock radio singles (including two #1’s) and two Gold-certified albums (House of III Fame; Den of Thieves). The band also received their first Road Gold certification from CIMA for sales of 25,000 concert tickets in 2015.

Time Capsule is a nod to the illustrious career the band has had and allows them to take stock of all of their amazing accomplishments since the release of their debut album, while formally beginning a new chapter with drummer Gavin Maguire, who joined The Trews in 2015.

We had the opportunity to catch up lead guitarist John-Angus MacDonald to discuss Time Capsule, The Trews long musical career, and what’s next.

Kat: Can you speak a little bit about what Time Capsule means to you, both personally and professionally?

John: Putting together Time Capsule gave us a chance to look back at everything we’ve written and created over the past 15 years. With that came a sense of pride about what we’ve managed to accomplish but also a horrifying sense of dread that we don’t want it to be the end! ☺ We still feel like a new band in a lot of ways with plenty left to accomplish and while the album comes at a good time to reflect and take stock, it’s also lit a fire under us to ensure our best material is yet to come.

Kat: Was there a moment/song/award/tour that you consider significant or that had a major impact on your musical career?

John: Sure, getting our first #1 with Not Ready To Go back in 2004 really moved the needle for us, it ended up being the most played song of that year. Opening for The Rolling Stones in Toronto then going on tour with Robert Plant within the same month was also pretty cool.

But I like to think that what has had the most impact on our success has been our focus on the music. Whether it’s pushing ourselves a little harder night after night on the road or being our own worst critics in the jam space and in the studio, we’ve always tried to put the music ahead of the awards and the accolades and the b.s. that comes along with this business … although playing onstage with Bruce Springsteen in his encore after we opened for him was also pretty rad ☺.

Kat: Can you speak on how (if any) the 4 new songs relate to the rest of the album? Or why those 4 specifically were added?

John: We were adamant that as much new material as possible be included in the package and we settled on four because any more would have made the album too long. With the exception of Sing Your Heart Out, which is an older live favorite that we recorded in studio for the first time for Time Capsule, these were all songs that were written since the departure of Sean Dalton, our drummer since 2001. For that reason alone they have a bit of a different flavor. The three upbeat rockers (Lotta Work/Little Love, Beautiful & Tragic and Chinese Kites) were heavily road tested beginning last summer and they seemed the most ready and representative of where we were at when we went into the studio so we chose them. I suppose they relate to the other songs on Time Capsule because they are very much in the same vein of what we’ve done all along.

Kat: What advice do you have for upcoming musical artists hoping to accomplish a career similar to yours?

John: Play a lot, play hard, stay focused on the music, try and find a little magic and if/when you do, try and hang onto it.   Oh, and record yourself – it’s probably the best way to improve.  Your ears don’t lie! ☺

Kat: What has been your greatest challenge as a band?

John: Staying inspired is probably the biggest trick to staying together and staying inspired is also the biggest challenge. Especially when you’re working with a group of guys who have known each other as long as we have. When working together it’s easy to fall into ruts and comfort zones that can make breaking new ground, or even getting to the next song, a challenge. For this reason, it’s important to shake things up. Record and write in different environments, bring new people into the fold, whether it’s a producer or co-writer or band mate, anything to help you feel excited again. Staying excited is essential to making good music in my opinion.

Kat: What’s next for The Trews?

John: We’re gonna take the show on the road in the late fall/early winter then it will be back to the studio.

No details yet on exactly when or how that will go down but we are sitting on dozens of new songs that are in various states of being. Once we figure out how to wrap them up and who to work with then I think the next record will happen pretty quick. It shouldn’t be too long!

Make sure to pick up your copy of Time Capsule. “A collection of our ‘Best Loved’songs from over the past 12 years + 4 new tracks!”