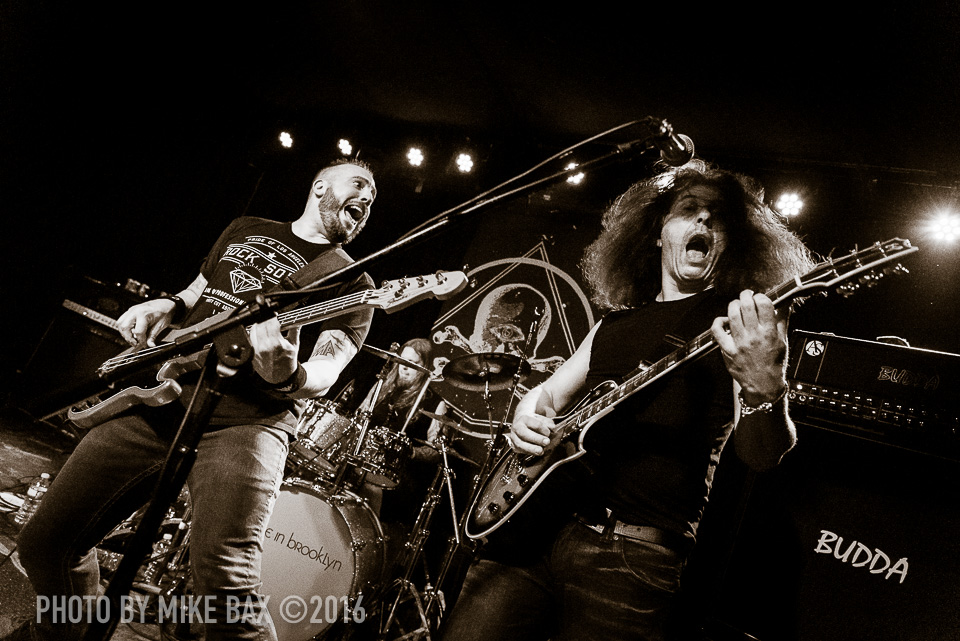 Metal Allegiance is set to perform at UK’s massive Bloodstock festival on August 13th. As a warm-up for this UK gig, they teamed up with Loudwire for a very special performance in Brooklyn, N.Y. as they wanted to do something special in the city that inducted Deep Purple into the Rock n Roll Hall of Fame.

What better way to cap off one of the hottest days of the summer than an evening of up-close and personal metal in an intimate environment. On Thursday night, fans who walked through the door at Saint Vitus bar in Brooklyn, N.Y. were treated to exactly this: two sets of metal, the first – an assortment of great cover songs along with some original material from the Metal Allegiance debut album. The second – an accurate representation of Deep Purple’s classic Made In Japan album, dubbed Made in Brooklyn specifically for this evening.

I couldn’t believe how small Saint Vitus was when I got there. The bar (which features no exterior signage whatsoever) might hold a couple of hundred people. Not only were fans getting to see a special one-off performance, they were getting to do it in style – right up close with the band. I was so close to Alex Skolnick during this performance I was having trouble focusing my camera on him. He was spraying me with sweat, quite honestly.

The opening duties were handled by Chains Over Razors, Martyrd, Magus Beast and Spiritual Sickness. Each of these bands performed 5 or 6 songs, bridging the gap between opening the venue and Metal Allegiance taking the stage. All of the openers were decent in their own right. Magus Beast had a fill-in vocalist who had a fine set of pipes, hitting some Rob Halford-esque high notes throughout their set. Chains Over Razors perform as a three piece – singer, lead guitarist and drummer – no bassist. The guitarist somehow split one of his peddles to deliver a low-end bass sound as he performed. Their sound reminded me of Helmet more than anything else.

One could easily write this off as a night of cover music and forgo the show. I disagree. Metal Allegiance offers collaborations with veteran metal musicians who are taking the time to rehearse some unique material and intermix it all in with their original compositions. The project gives the musicians an opportunity to collaborate on material they love, and perform it for fans willing to come out and watch them having fun jamming together. The cost of admission was relatively cheap, and the band played for over two and a half hours. Add in the very obvious fact that the venue is so small that it’s an easy opportunity to meet these musicians and get a photograph and/or autograph from them, and share some stories. A win-win for both fans and band.

The draw this evening was, of course, getting to see how these guys would replicate the classic Made in Japan album. From the onset, as the band launched into ‘Highway Star’, it was game-on for the following 90 minutes. While the band took some liberties with some of the improvisations present on the classic Deep Purple set, they managed to capture the magic present on that album in their own unique fashion and deliver it (in spades) to the crowd. Mark Osegueda managed to hit all of the high notes present on the album – ‘Child in Time’ and ‘Strange Kind of Woman’ both have moments of extremely high pitched screams from a young Ian Gillan that would frighten most singers from even attempting them. Kenny Grohowski DOMINATED the evening on the kit – ‘the drum solo on ‘The Mule’ being handled in a most notable fashion. And yes, Bumblefoot and Skolnick did indeed manage to deliver the goods on Jon Lord’s keyboard work in their own electrical fashion.

What entertained me the most was watching the faces on all of the musicians – it was unbridled joy throughout the night – they enjoyed themselves more than anyone in the audience, and that kind of energy is completely contagious.