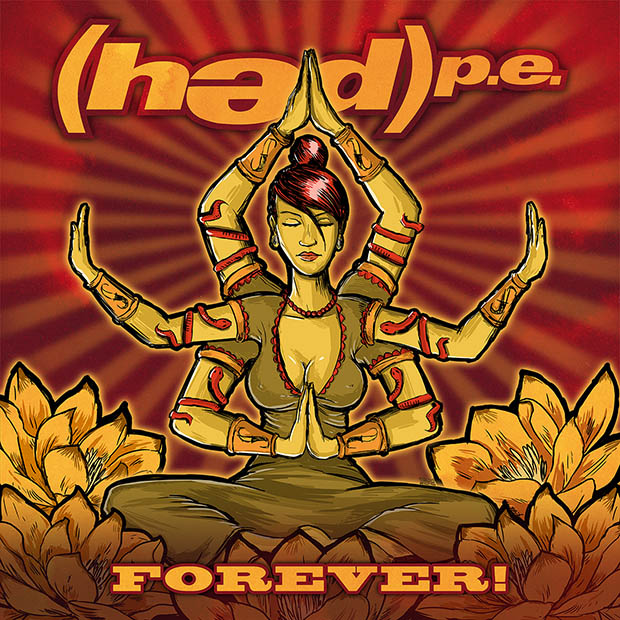 (Hed)P.E. is the sort of band that refuses to call it a day. Since forming over 2 decades ago in 1994 the only founding member to remain is vocalist Jared Gomes, so his refusal to let the band die is almost admirable. To many, (Hed)P.E. are an acquired taste mixing genres such as metal, punk, hip-hop and dancehall creating a style that many bands have tried to emulate but rarely get right. Sadly (Hed)P.E. have been chasing the success of their breakthrough album Broke from 2000, never really hitting the mark in the same way since. Of course that’s not to say Forever is a poor album, but it will always live in the shadow of Broke.

The albums opening track, “Live”, opens with a really rather eerie echoing guitar riff followed by a drum beat that feels like more a determination to keep a pace rather then something that compliments the tune. Jared’s vocals also feel a little all over the place whilst being intercut with a female chorus line which does maintain the eerie feel that came with the intro of the song. The second track, “Pay Me”, feels more in line with the feel of the bands hard rock/nu-metal style. The vocals, are harsher, as is the guitar, bass and drums. Like the opening track it feels like a song with great potential but lacking in that one thing that could make it great. It does have quite a political message behind it by incorporating a sound byte of a rally of some sort criticising the hierarchy of life in the US. “Closer”, although still nothing special, feels more like (Hed)P.E. with lyrics touching on topics like sex, changing the world, and taking chances in life. It does feel like a complete mess of a song without much of a point to it and cutting out very abruptly. Unfortunately there is little to say on the other tracks as it really is just more of the same with no song standing out from the crowd, with the exception of the final tune, “Ganja”, which is a step away from (Hed)P.E.’s usual sound. A full on reggae tune all about, yes you guessed it, ganja!

In conclusion, Forever, although not an unlistenable album, lacks that spark that the band hit at the turn of the century with Broke. Still, if you can manage to avoid the comparison you may still enjoy this album.

Check out the track “Hurt” here