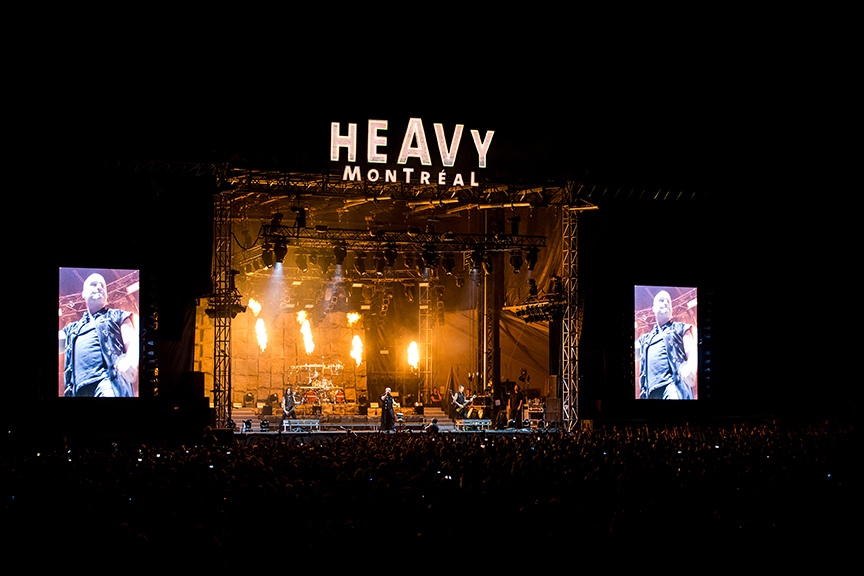 The best European Metal Festival that is not in Europe.

There was no other place in North America offering such a diversified mix of European and North American metal this year than at Heavy Montréal. Put on by Evenko and presented by Molson Canadian, Heavy Montréal attracted more than 30,000 festivalgoers to the Plaine des jeux at Parc Jean-Drapeau over the weekend. This was the 8th edition of the metal fest, a leaner and more focused edition of Heavy Montréal for 2016 that saw the line-up tighten its focus on just metal acts over two days on three stages.

Of these bands, here’s a few highlights: Five Finger Death Punch and Disturbed are never going to play a wimpy show. They brought the heaviest of metal to each evening in their own signature fashion amidst a hail of smoke, flames and fireworks. Their presence played an integral part in drawing the almost 30,000 people that attended Heavy Montréal over both nights. Some of the real magic was to be found in the earlier performances on each of this year’s three stages. Sabaton blew everyone away on Saturday with a full-size military tank on the stage cradling drummer Hannes van Dahl’s drum kit. And an ample supply of flames and fireworks mixed in with their killer live performance.

Nightwish, also on Saturday, brought their full European stage spectacle with them – Heavy Montréal being their only appearance in a North American festival in 2016. It was truly awesome to witness them in all of their glory. Zakk Wylde played three nights in a row over the weekend – doing a Black Label Society club show at Théâtre Corona on Friday night, a Black Label Society set again on Saturday and a Zakk Wylde performance on Sunday.

At the apex of the afternoon on Saturday, Fear Factory performed Demanufacture in its entirety during their 45-minute slot. Considered by many to be their defining album, and a cornerstone metal album from the mid-1990s, it was indeed one of the best performances of the festival. The mighty Mastodon took the main stage

Blind Guardian, like Sabaton the day before, delivered their signature dose of European metal in similar fashion. Danish ‘Metal-Rockabilly’ heavyweights Volbeat executed a stellar live show, complete with a wicked version of ‘Evelyn’ featuring Mark “Barney” Greenway of Napalm Death, who did the studio version of the song on Beyond Hell/Above Heaven. This was right after Napalm Death had just played their killer set on the Blabbermouth stage minutes before Volbeat took the stage. Killswitch Engage performed their cover of ‘Holy Diver’ mid-way through their set, getting the majority of the crowd to sing along regardless of where they were on the Plaine des jeux festival grounds.

And lastly, Candlemass. So good!!! Easily the highlight of the festival for me – a band I’d never been able to see live until this edition of Heavy Montreal. They utterly blew me away. While most of the attendees were watching Disturbed, Candlemass dropped an hour-long set of some of their finest musical moments for a legion of like-minded fans. I’m still tingling over finally seeing them live.

Almost a third of the attendees this weekend came from outside Quebec. Many visitors from other Canadian provinces stopped into Montréal, just like fans from 23 other countries, including the United States, Germany, Australia, Brazil, Switzerland, France and Great Britain.

The two main stages at Heavy Montéal faced each other on the Plaine des jeux, trading off music in synchronization from 1pm until 11pm on both days. Tucked in adjacent to the VIP area was the smaller Blabbermouth stage, offering fans other musical options as a break from the two main stages. It was on this stage that acts like Beartooth, Escape The Fate, Cult of Luna and Candlemass blew away attendees regardless of what was happening on the main stages.

The outer rim of the park was adorned with four massive burgundy ‘guardians’, shrouded in mystery in between the Heavy Montreal stage and the Blabbermouth stage, and fans could be seen taking photos with these guardians for the entirety of the weekend. The amenities were top notch once again; great food trucks and a lovely Molson Canadian shaded lounge for fans to catch a break from the blistering heat. There was also an industrial misting machine that fans walked in front of repeatedly during the hotter periods of both afternoons. Professional wrestlers could be seen both in the Heavy Mania wrestling ring and walking about the grounds interacting with fans.

For their money this year, fans got two solid days of diversified metal from an international cull of artists. Edition 8 of Heavy Montréal delivered the goods once again in world-class fashion. The promoters are already well into the planning of next summer’s 2017 edition.