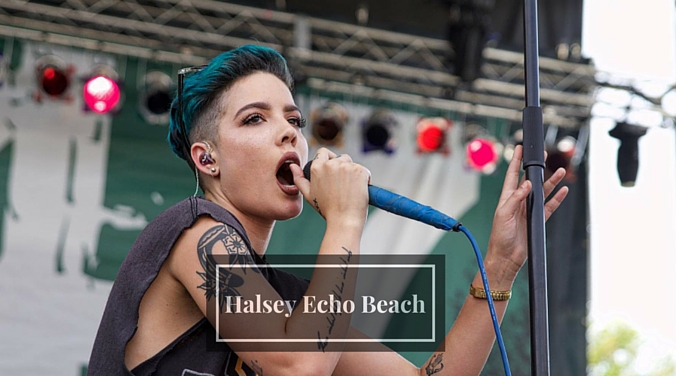 It was a gorgeous summer night in the city this past Wednesday. I don’t think it could’ve been any more perfect.

It was crazy how suitable TD Echo Beach was for the Badlands Tour. In an interview last year, Halsey mentioned that “Badlands is a concept album that focuses on the fictional dystopian society known as The Badlands. The city is surrounded by a desert wasteland, keeping the inhabitants of The Badlands captive.” The set-up of TD Echo Beach is literally a stage and a sand pit. The sand pit is what made the whole concert experience so surreal because it felt like we were in The Badlands.

In addition, Halsey’s stage set-up and design was just spectacular. Her band was set to both sides and a huge stage in the middle set for herself. The large video display in the back made the show much more enjoyable since the venue was rather long and narrow so there were a lot of fans who would not have had a clear view. Each song had its own video that was put on the large display which transformed the venue into The Badlands. Also, there were several large rectangular structures on stage that at one point lit up like a city skyline. It was truly incredible.

Halsey’s set list consisted of almost half of her Badlands album including her hits “Hold Me Down,” “New Americana” and “Ghost.” She also covered Justin Bieber’s “The Feeling” and sang “Is There Somewhere” from her The Room EP. One could easily judge that Halsey gave her ALL in every song. The level of energy that she brings to her show is remarkable, especially considering that she had such a huge stage space to herself. She filled the Toronto air with her dark electro pop vibes that had everyone wanting more.

There were several moments from Wednesday night that truly made the Toronto stop on the Badlands Tour unique and memorable. Before she sang “Ghost,” she mentioned that she had only ever told the back-story for this track once before. She said she was 19 years old on a train and this tune popped in her head along with some words so she started humming, singing and writing it on the voice notes app on her cell phone. After repeating several lines over and over, she was surprised at what she had come up with. She thought she was ripping another song because of how good she thought it was.  She got carried away in the song sudden the lady seated across from her said, “Uh, can you shut the fuck up?” Halsey mentioned how this had startled her and made her stop writing the track. Later on, she was in the studio one day and her producers needed a track from her. She panicked and then remembered the voice note, pulled it out then started to play it. “Ghost” was the first single off of her Badlands album.

Another intimate moment came when Halsey openly admitted that she and the crew did not think that the venue would sell half the tickets.  However, the fact was, they sold out, over the limit that the venue could hold! The crowd erupted in cheers.

Immediately after Halsey’s cover of Justin Bieber’s “The Feeling” (on which she is featured) she jokingly said to the crowd, “Make sure you guys tell Justin Bieber that I came to Toronto and made that song my bitch [pause] but back to more important things like my songs.” One could only imagine how loud those cheers were after she said that.

It is without a doubt that each and every fan went home with a smile plastered on their face. I highly recommend everyone going to see this [almost] 22-year-old woman in concert if you get the chance. She is phenomenal.