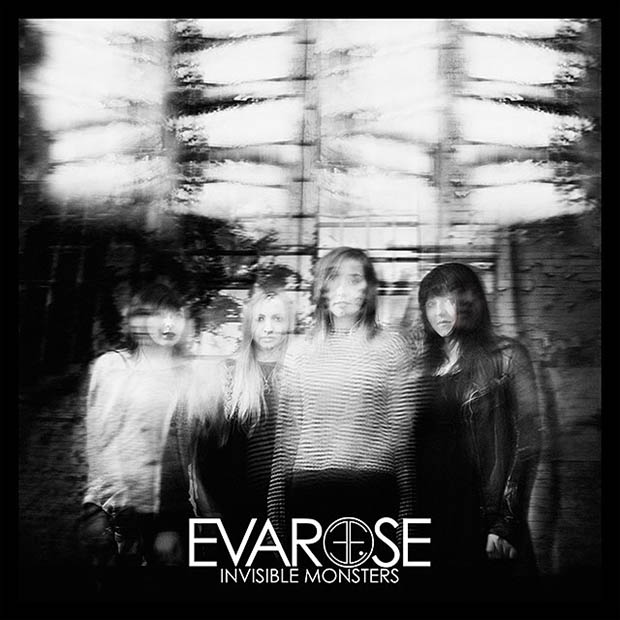 Having spent a good part of the last few years hanging around the live venues of Oxford, it was inevitable that my path would cross with local quartet Evarose and it did on numerous occasions with the band, I’m pleased to report, always delivering the kind of quality set that would prompt me to head down early next time they appeared at the wrong end of the next big gig in Oxford. Well, eventually, and more than likely down to the hard work the band put in, they have slogged their way up the ladder of the live circuit, built up a solid reputation for themselves and, now, have just issued their new album Invisible Monsters.

Invisible Monsters sees the four girls peddling their brand of almost symphonic grungy punk rock which, thankfully, has more in common with the more creative sounds of groups like Tonight Alive than it does with the overly-polished, made-for-radio side of the pop-punk coin. Having said that, don’t think that these Oxfordshire lasses don’t know how to write a head-filler of a tune because, as demonstrated on “Quicksand”, that is something they’re very capable of.

In fact, throughout Invisible Monsters they prove that time and time again as songs like “Telephonic” see the band turning in a more dynamic, layered sound and one that is a million miles away from the easy option of churning out three-minutes chunks of throwaway pop with guitars. All in all, from the early days of trudging the boards as a nervous looking bunch of mates from Oxford, Invisible Monsters and tracks like the brilliant “Provoke Me” are the sound of an act who have worked hard to grow their sound into something intelligent and classy.

Invisible Monsters is Evarose’s coming of age album. Having never really been in the limelight as such, there are too many quality moments on this release to keep this band a secret for much longer.

Check out the track “Glitch”