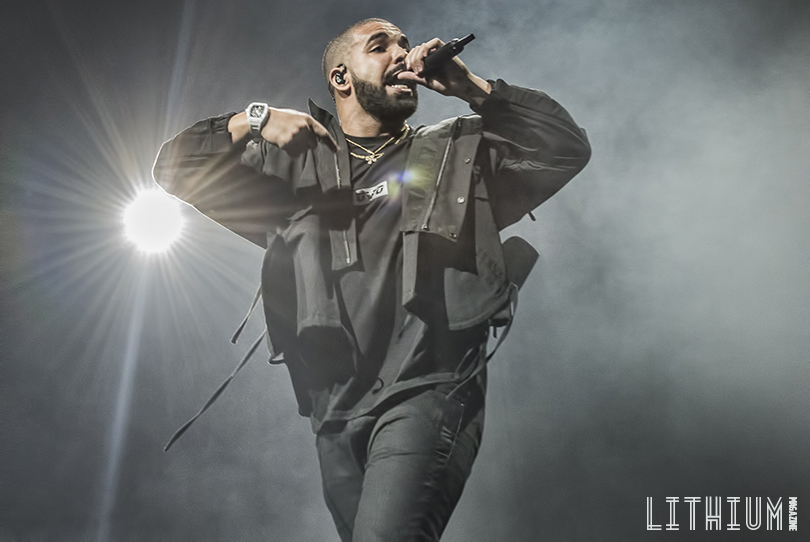 This past Sunday, at Drake’s 7th Annual OVOFest, the crowd was more than amped for Drake and Future as part of the Summer Sixteen Tour. Drake opened the show and proceeded to attack a huge set list of approximately 50 songs, including his smash hits and songs from this year’s release, Views.

Drake promised special guest appearances and he delivered. He brought out, or rather up from the trap door in the stage floor… Rihanna.

She performed “Needed Me” and “Bitch Better Have My Money” before Drake came back and joined her to perform, for the first time ever together, “Too Good”.  They also delivered “Work”.  Like in other performances the pair wined together; they even shared a cute little moment when Rihanna appeared to mess up a part of a song.  “That’s how you know it’s real,” Drake joked.  The Barbadian also shared that she was usually in her native home this particular weekend for Carnival, alluding to how special it was that she was in Toronto and not adorning her usual beaded and barely there, Carnival costume.

Firecracker bombs, fireworks and smoke kept the crowd exhilarated during both Drizzy and Future’s sets.  Drake had many visual treats as well.  During the song “9”, the backdrop featured Toronto’s CN Tower.  And at one point, lights from the ceiling came down to create a 6.  He also took a tour around the Air Canada Centre on a floating-stage-plexi-glass-gondola.

The decked-out-in-Drake-apparel-crowd (there were regular merch booths as well as Drake’s OVO Store to shop at) was asked if they wanted the short or the long show, and were warned no one should be sitting down or looking tired.  Loud shouts and screams ensured the long show was the only show the audience wanted.  At about 11:35 Drake joked, “They want me off the stage, but I own the building,” as he teased about his many Raptors and ACC connections.

During Future’s set, Future and his DJ undeniably hyped the crowd.  Songs included “Stick Talk” and “Fuck Up Some Commas” and he didn’t hold back when it came to more of the thunderous fireworks.  Four dancers also brought heat to the ATL rappers trap music.  Later, Drake returned to perform “Big Rings” and “Jumpman” alongside Future.  However, absent from the collab was “Where Ya At”.   But the autotune rapper did perform “Low Life”, a song recorded with Toronto’s own, The Weeknd.

After, Drake took back the baton to round out the night.  Before launching into “Energy”, the Toronto native, took a second to genuinely take it all in.  Throughout the night Drizzy had gone on about how much his city meant to him and the pride he felt.  “I love you for real,” he said.  The show ended with the song “Legend”.

With the exchange of love and appreciation from both the adoring crowd and Drake, he bestowed a message, “Use the hours of the day to protect the ones you love, we don’t want to lose any.”  “Get home safe,” he said.

Earlier in the evening, Roy Woods opened the show.

Watch for video documentation to show up somewhere, as there were many cameras throughout the venue, including many shots of the crowd!