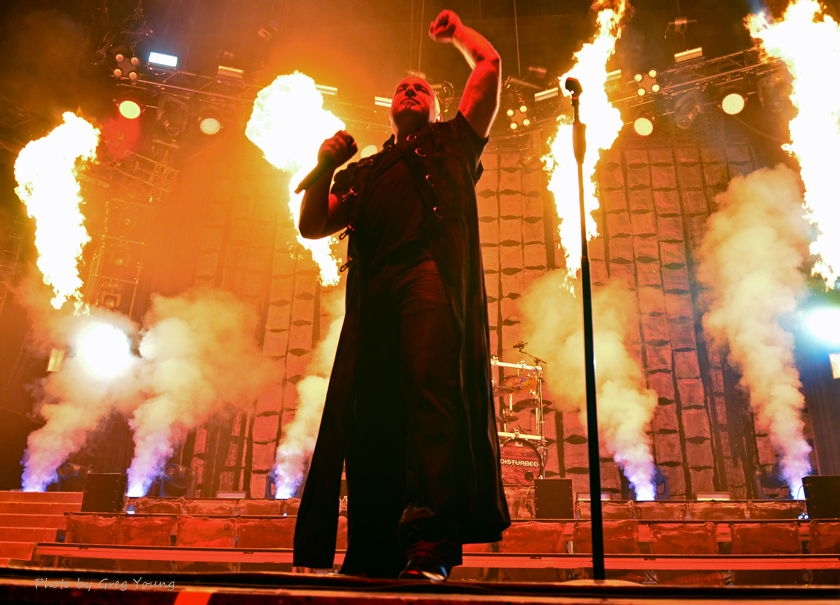 It was more than just the humidity that made this past Monday night a scorcher; it was the workings of two metal titans melting the faces off the diehard fans that gathered at Molson Amphitheatre. Breaking Benjamin and Disturbed rounded the bill of a full night of mayhem that included Alter Bridge and Saint Ansonia.  An eclectic group of music lovers filled the waterfront venue with their only refuge from the heat being drink breaks in between each set.

Breaking Benjamin began the night with their epic hit “So Cold”. It was a quick injection of loud, hard, right to the point, and exactly what fans wanted as they rose to their feet and began to chant along.

With an album release in 2015 entitled Dark before Dawn, the band has been steadily climbing the charts and boasting number one hits in both rock and alternative categories. This made for a hit-laden set including” Angels Fall”, “Blow Me Away, and “I Will Not Bow”.

The band took some time out to have some fun ripping through the Star Wars theme “Imperial March” while wielding light sabers. Some classic snippets were played such as “Schism” by Tool, and “Smells like Teen Spirit” by Nirvana.

A steady flow of hits kept coming and concluded with “The Diary of Jane”, fantastic and frenetic priming for what was yet to come.

My brothers, my sisters, my blood…these were the words from Disturbed frontman David Draiman as he addressed the empathic fan base. In recognition of his summoning, devil horns were raised in the air, and cheers as loud as thunder billowed through the summer night. In a nano second, unification of metal-loving bliss was underway.

Disturbed hit the ground running with mega fan fav “10,000 fists”, which I’m sure was quite possibly the number in the air. The infectious chunky guitar workings and gritty prowess set the tone for a powerful set.

“The Vengeful One” was the first to be delivered off the new album Immortalized, and easily commanded its spot on the Disturbed roster. Savage pyrotechnics provided a continuous onslaught that inspired audible gasps from the crowd.

Members of Saint Asonia and Breaking Benjamin joined the stage for “Who Taught You How to Hate” with a message of how we need to remove so much hate from the world. Once again, Draiman’s authoritative nature resonated with agreeable enthusiasm.

The band steered a slowdown with the spine-chilling cover of Simon and Garfunkel’s “Sound of Silence”. The amazing mystic power of this ballad wrangled the entire venue into a spellbinding serenity. The relevance of these powerful lyrics was a potent message for all.

Draiman called on fans for the concluding chant of “We are all Disturbed” before blowing up the night with “Down with Sickness” and cementing their message to all of “Music is a Weapon”.