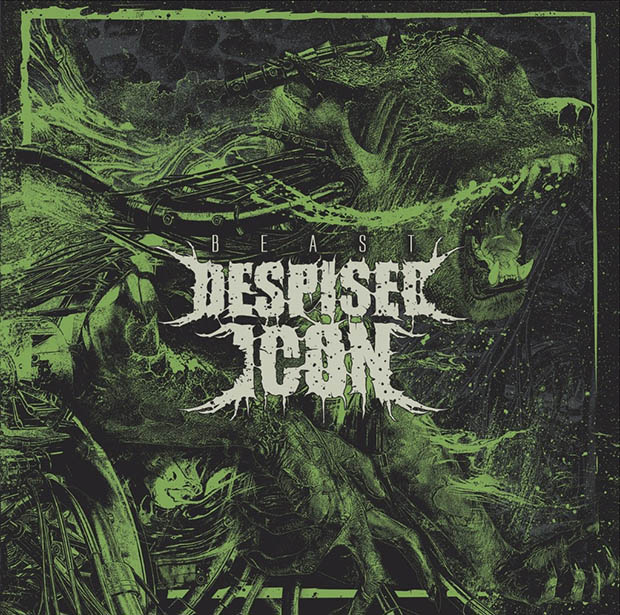 For almost ten years Canadian band Despised Icon set the bar for the whole deathcore genre so, when the group announced their return last year and followed it up with some cranium-cracking shows at the Impericon Festival, along with exciting news about their first album in over seven years, it’s understandable that there was more than a ripple of excitement across the extreme metal scene. One question remains now – does Beast live up to the hype or has the whole death metal/deathcore scene moved on so far in seven years thus leaving the Canadian with too much catching up to do?

Well, those of us who saw the band on their return to the UK earlier this year can testify that, in the live environment at least, the band have still got “it”. On record, well, with a running time of just over twenty-nine minutes, Beast shows the band are in no mood to mess about as they dispense with anything that can be remotely classed as fat leaving us with a lean, slick half an hour of raging brutality.

As before, a technically relentless onslaught of razorsharp riffing and face-pulverizing drums makes up the bones of their sound while the dual vocals of Alex Erian and Steve Marois growl and spew through the likes of “Grind Forever”. The problem is that, as I hinted at in my intro, the death metal genre (for better or worse depending on your opinion) has moved on so, while it’s unfair to describe Beast as dated or even old-school, it’s clear from listening to tracks like “The Aftermath” that Despised Icon, while tweaking their sound slightly, are quite happy to pick up where they left off back in 2010.

With so much having changed within the deathcore genre over the years these heavyweights have been away, Beast may not be a record that makes the kind of ructions among the scene that it would have done say ten years ago. However, if you want to see a top-class musical demonstration of how to smash someones skull in, Beast ticks all the right boxes.

Check out the track “Bad Vibes”