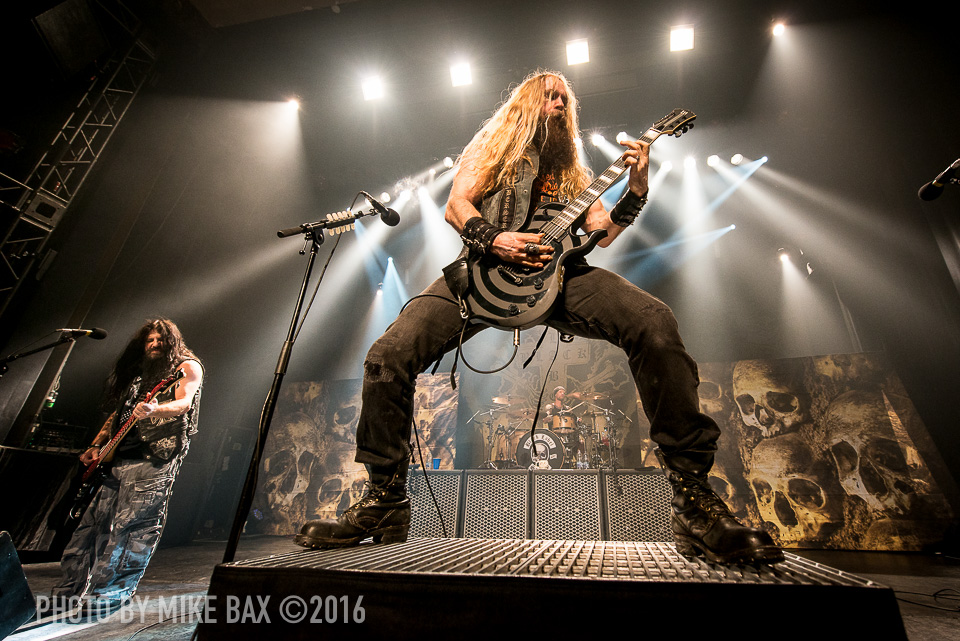 Zakk Wylde, a man who apparently can’t sit still, performed three days in a row in Montréal over the weekend. Zakk was booked in to play Heavy Montréal on Saturday as Black Label Society and then again on Sunday performing material off his more sombre release Book of Shadows II. A few weeks prior to Heavy Montréal it was announced that Black Label Society would also play a small club show at Théâtre Corona with Tyler Bryant & the Shakedown opening the show.

Anyone in the room who hadn’t heard Tyler Bryant & the Shakedown must have surely been impressed as their brand of straight-up rock and roll had everyone in my line of vision grooving along to their songs. It got to be midway through their set and I cursed the slow service I’d gotten at the restaurant I was in upon realizing I’d likely missed twenty minutes of their performance. I won’t make the same mistake the next time they come around. Tyler Bryant & the Shakedown are the real deal, complete with the necessary stage presence to really sell it home.

Seeing Wylde in a club this size was reason enough to have me rubbing my hands with child-like glee in the minutes before he, John DeServio, Jeff Fabb and Dario Lorina took the stage and blasted their way through ‘The Beginning… At Last’. Wylde stood perched atop a metal riser at center stage numerous times, wringing the neck of his guitar while whipping his head around in circles like a headbanger half his age. The BLS hits just kept on coming all night long; ‘Bleed for Me’, ‘Suicide Messiah’, ‘Damn the Flood’, ‘Angel of Mercy’, ‘In This River’, ‘The Blessed Hellride’, ‘Concrete Jungle’ and ‘Stillborn’ were performed in spectacular fashion. As Zakk sat down in front of piano to perform ‘In This River’ his road crew walked on stage and clamped two large photos of Dimebag Darrell Abbott overtop of the BLS graphics on either side of drummer Jeff Fabb’s kit. The iPhone cameras came out amidst a good number of bro-hugs in the crowd as the room mourned the loss of Pantera’s almighty guitarist, gone over ten years now in an utterly senseless act of violence.

Wylde naturally levied out a requisite guitar solo after ‘My Dying Time’, showcasing his incredible picking skills to a room of appreciative fans. By the time the show enders ’Concrete Jungle’ and ‘Stillborn’ were being played, I felt like I needed to pinch myself, being only a few rows back in the crowd for a number of these songs was SUCH a treat in and of itself. This was an incredible predecessor to a weekend of metal at Heavy Montréal, and a night I won’t soon forget.