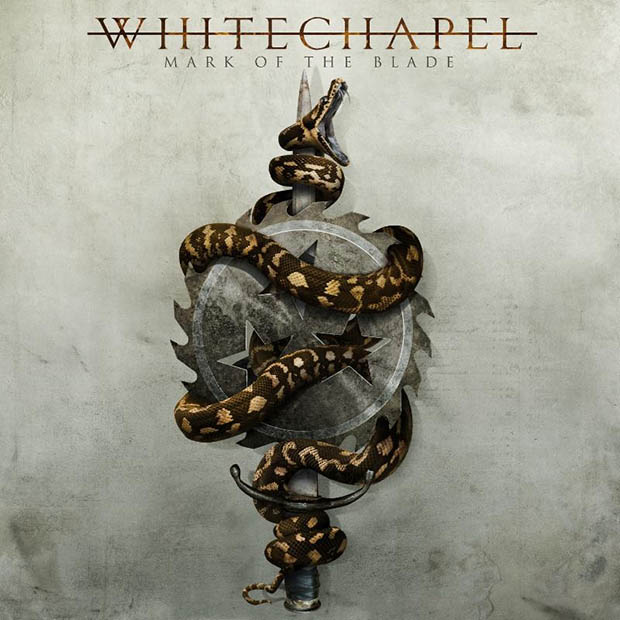 Deathcore favourites Whitechapel promised something a little different on Mark Of The Blade, the sixth album in their ten year career. The announcement drew interest and intrigue from some, but disgust from others, especially at the mention of the dreaded clean vocals. However, as their latest offering slams into life with “The Void”, longstanding fans of Whitechapel shouldn’t be too put off as the band still smash out some heavy shit.

Heavy crap like “A Killing Industry”, for example, where the band pummel through something that sounds like it would nestle comfortably into the track listing of an album like, say, Slipknot’s Iowa. Now, we all know how much that album changed the landscape for heavy music and you can hear the inspiration seeping through the colossal grooves of Mark Of The Blade.

Punishingly heavy, tracks like “Tormented” are still jackhammer-heavy but don’t just rely on brute force to see them through to their conclusion. Instead Bozeman and co. use an eerie, suffocating darkness to tracks like “Venomous” to really shift their band to a new level. Speaking of Bozeman, sure, his vocals aren’t just full on ‘br00tal’ but, as they say, variety is the spice of life so, rather than dismiss this from the off, Bozeman should be applauded for trying something different.

The thing is though, when you think different or you think “clean vocals”, you don’t tend to think of how Bozeman sounds on “Bring Me Home”. Using Iowa as a reference point again, Bozeman has certainly upped his game this time round as he shifts further away from the “coughing up a lung” style employed by most deathcore vocalists. Hearing him accompany the haunting tones of “Bring Me Home” with cleaner vocals, comparisons to Corey Taylor soon fill your head and, while the exploration of different style might only be fleeting on this album, they do sit well alongside tracks like “Elitist Hordes” where Whitechapel maybe don’t rewrite the heavy music blueprint, but certainly do their best to step away from the deathcore genre they once championed.

Mark Of The Blade Track Listing:

Check out the track “The Void”