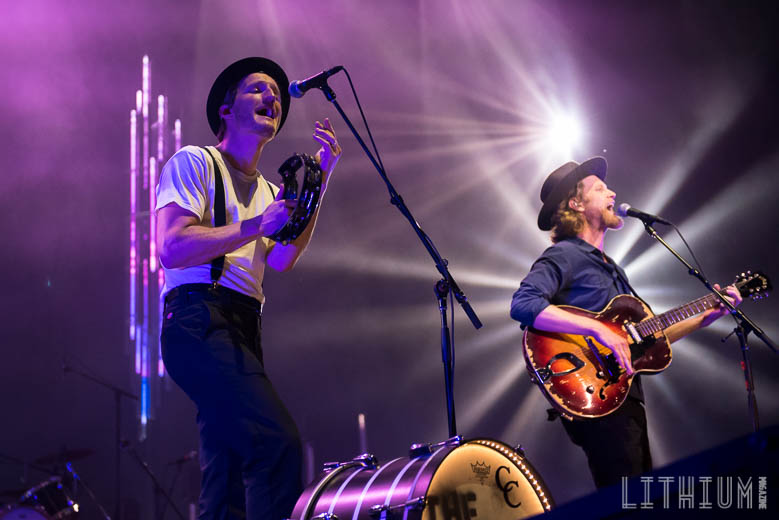 This was the case for last night’s show. The crowd erupted into cheers when they heard older material and was equally enthusiastic about anything new.  Combined, their set list was pretty lengthy; they played 20 songs including four in the encore so no one complained.  However, some of their tracks were fairly short in length so it went by quick.

The band opened with “Sleep On The Floor” which is from the Cleopatra album. After that, they continuously mixed it up with songs from each album; their most popular being “Ho Hey” being played toward the beginning.   Prior to, lead singer Wesley Schultz asked if everyone could put away their cell phones after they played.  This request is becoming more and more common lately as artists ask to stop filming and simply enjoy the show ‘live.’ But, of course, not everyone listens.

In the middle of their set, they hopped off stage and went to play a smaller area at the base of the 200 section.  The band gave an intimate performance playing just two songs including “Where the Skies are Blue” from their new album and “Subterranean Homesick Blues” – a Bob Dylan cover.

Towards the end of the show, The Lumineers played “Big Parade” and confetti machines were set off.  Millions of white confetti came fluttering down the front sections of the venue as the band wrapped up for the night.

Schultz later introduced the band, which I found a bit strange since introductions are typically done closer to the beginning or sometimes midway through a set. The band then left but soon returned for the four-track encore. The crowd screamed for“Stubborn Love” – a fan favourite from their self-titled album. The Lumineers encouraged everyone to sing as loud as they possibly could for this one, as it was the last for the night.

Earlier in the evening, show openers  Rayland Baxter and Langhorne Slim & The Law both gave an enthusiastic performance with Langhorne frontman Sean Scolnick dancing his way into the general admission pit area.  Actually, he pretty much danced the entire set and the crowd loved it.   It was during this performance that a concert goer proposed to his girlfriend. Scolnick read the man’s name from a piece of paper and pointed to him in the crowd, explaining that the proposal had been requested and arranged via the band’s social media. Fans were excited and applauded when the girlfriend said ‘yes.’

Overall, it was a spectacular, warm summer night in Toronto and both the fans and the bands were thankful that they came to the city.

Sleep on the Floor

Flowers In Your Hair

Where the Skies are Blue