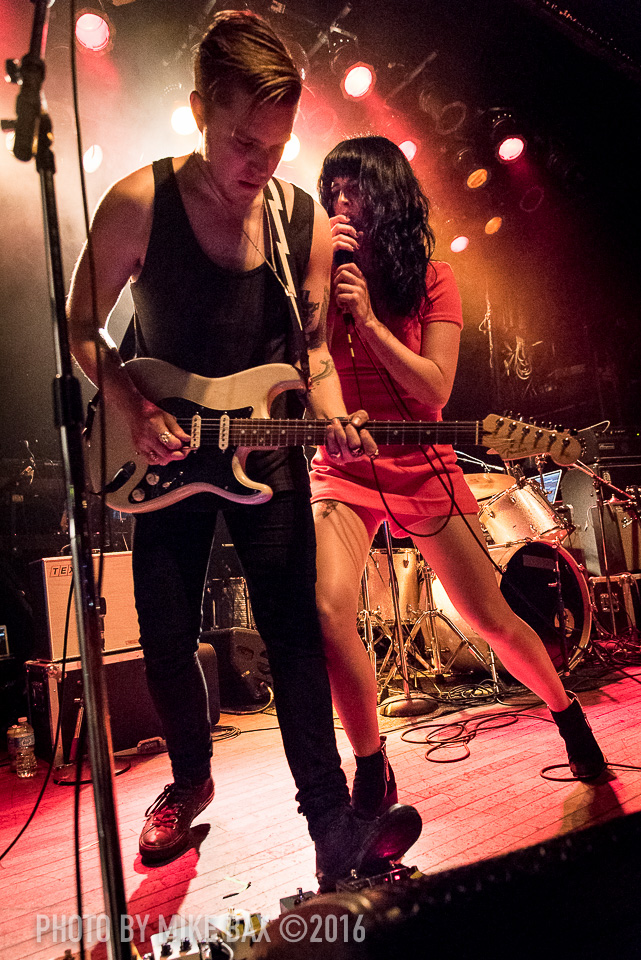 One of my favourite things about living close to Toronto is the easy exposure to a plethora of brilliant musicianship that seems to bleed out of the city’s every nook and cranny. Take The Balconies for instance – a totally energetic and lightning-charged local band that deliver the goods repeatedly with world class panache. They recently opened the Peter, Bjorn and John show at the Mod Club this week and did a phenomenal job warming the place up.

The jury is out on whether Peter, Bjorn and John’s core audience were prepared for what they saw this evening. Watching lead singer and guitarist Jacquie Neville bouncing around the Mod Club stage, swirling her jet black hair about like something out of a 1980s hair metal video might have been a bit much for them. But I hope the general consensus is that they got a PB&J bonus for their ticket admission.

It’s interesting times for The Balconies. They are sitting on a brand new concept album entitled Rhonda, due to hit the shelves in the fall of this year. Not only will Rhonda showcase Liam Jaeger and Jacquie Neville’s dual writing prowess, but they have both been working together on the marketing, visuals and some other interesting accoutrements to enhance the Rhonda experience.

For their final song ‘Guilty Pleasures’, Jacquie Neville jumped off the stage and into the crowd, grabbing the hands of unwary onlookers and getting them to spin around with her as she sung the song in an up close and personal fashion that enticed lots of smiles from the onlookers in the crowd. It was an added bonus that The Balconies performed only material from their as yet unreleased 2016 album – the two songs they’ve released as advance singles (‘War’ and ‘Money Money’) along with ‘Middle Of The Night’, ‘Zombie Love’, ‘Knock Me Down’, ‘D Day’, ‘Queen Jesus’, ‘Rhonda’ and ‘Guilty Pleasures’.

Swing by The Balconies socials and check out their new video for ‘War’. In a few weeks ‘War’ will be bookended with another new video for ‘Money Money’ as the band continues to tease their upcoming album release.