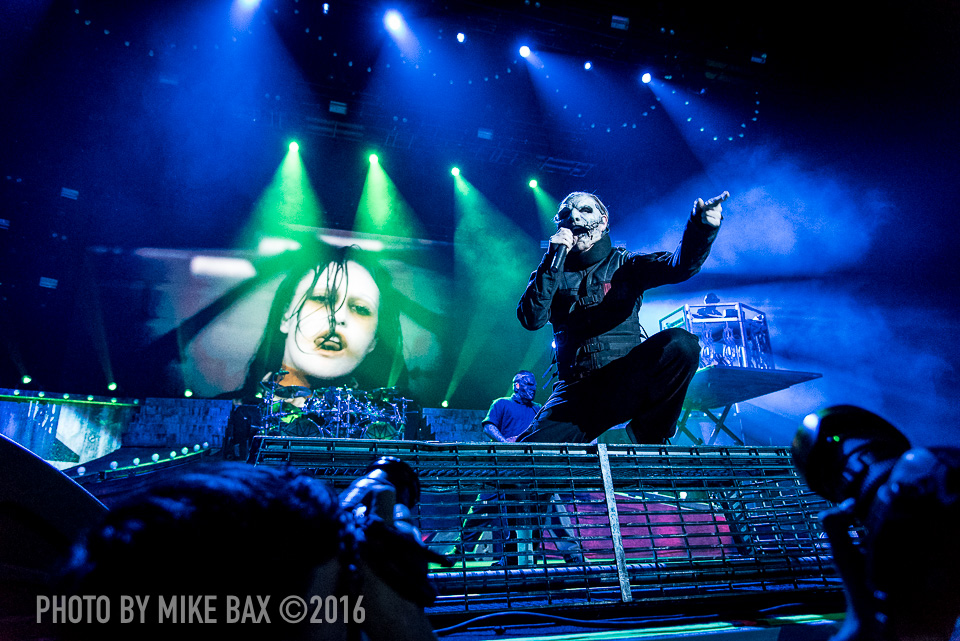 In a world of so much hate and unrest lately, you might think a metal concert would be where things would get crazier – according to the protest group that stood outside of the Air Canada Centre on Tues night, warning show goers to repent.  Instead, Lithium Magazine saw almost everyone in the venue on their feet for the one thing that unites us all… music. Of Mice & Men, Marilyn Manson, and Slipknot were greeted by loving fans who sang every word of every song… even when Manson wasn’t.

Openers Of Mice & Men did a great job warming up the crowd while the venue continued to fill in. The California metalcore outfit played a short but sweet eight-song set that included mainly material from their latest album, such as “Bones Exposed,” “Never Giving Up,” and “Public Service Announcement”. Despite being hospitalized overnight just four days prior to the Toronto show, frontman Austin Carlile gave a great performance and sounded fantastic. The band played the lead single from their upcoming album Cold World and then finished with fan-favourite, “The Depths”.

I’ve been a fan of Marilyn Manson since I was nine years old and this was my first time seeing him live; believe me when I say that I really wanted it to be a good show. Sadly, it wasn’t. The hot mess stumbled onto the stage to play a ten-song set that seemed to go on for hours as he randomly disappeared between songs for 2-5 minutes at a time.  The most head-scratching part of his WTF performance would have to be when he grabbed a saxophone and slurred, “Canada, how long do you think I can do a sax solo?” The answer was all of 10 seconds as he gave up quickly. If he wasn’t singing the wrong lyrics to “Disposable Teens” he was falling over the stage, not to mention that he sliced his hand on a beer bottle during the very first song.  The cut was bad enough that fans could see blood dripping down his arm to his elbow as he held the mic up.   He forged ahead with familiar hits like “mOBSCENE”, “The Dope Show”, and “Deep Six” and almost redeemed himself during “Sweet Dreams” when he emerged on a pair of stilts to deliver the song.  However, the performance fell apart again shortly after for “Antichrist Superstar” and finishing with “The Beautiful People”.

To be fair, some show goers seemed to like this version of Manson and were totally entertained by his performance. Whether it was his best show or not is debatable, depending on personal preference, but I can’t deny that he can still scream and put on a somewhat enjoyable show consisting of many different props, set changes, and makeup alterations.

Last but definitely not least, Slipknot took the stage. This band will never fail to amaze me. No matter how much they go through in life, as a whole or individually, they always come back bigger and better. Frontman Corey Taylor underwent spinal surgery a little over a month ago to replace two discs in his neck. You would have never known it as he head-banged his way through a 14-song set and 3-song encore that consisted of nothing but hits. With all nine members sounding tight, loud, and almost identical to the recorded songs, they played “Disasterpiece,” “Eyeless,” “Pulse of the Maggots,” “Left Behind,” “Duality,” and “Spit It Out”, the latter of which included the distinguished “Jump The Fuck Up” moment where the entire crowd jumps on the band’s command.

At a Slipknot show, you can feel the energy in your chest, you can hear the crowd’s love for the band ringing in your ears, and you can see the effort the band puts into making it an unforgettable performance. Whether you’re a huge fan or have heard just one song, I recommend seeing them live. A Slipknot show is like no other.