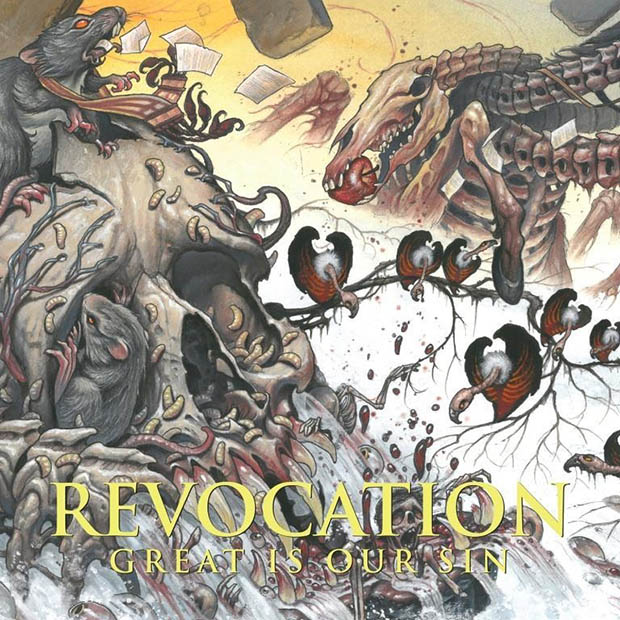 Great Is Our Sin batters out of the starting blocks with “Arbiters Of The Apocalypse”, a track that has the power of a juggernaut. It’s a punishing way for technical death metal titans Revocation to introduce the world to their new album, but it’s one that is a mere taster for what is to follow.

From that point forward, Revocation just smash, smash and smash your senses some more with an unrelenting onslaught of technically flawless metal. Displaying a level of musicianship that will leave you dizzy trying to keep up with it, Revocation are simply unstoppable on this album.

Steaming through “Theatre Of Horror”, mashing your head in with the jarring, juddering “Communion” then grinding you into the ground with the simply glorious “Only The Spineless Survive”, Great Is Our Sin is a masterclass in technical metal that very few bands can match. It’s an album with so much going on that you’ll find it hard to keep up and, if you’re anything like us, you’ll be fucking breathless by the time the U.S. technical masters bring Great Is Our Sin crashing to an almighty fucking climax with their stunning cover of Slayer classic “Altar Of Sacrifice”.

It’s hard to find fault with Great Is Our Sin such is the quality Revocation display throughout the forty-eight minutes this album is running. In fact, if you’re going to level a criticism at the album it’s that, with a running time of twelve minutes shy of an hour, Revocation are ensuring that only those with the highest levels of stamina will be able to see this one through to the end.

Great Is Our Sin Track Listing:

Check out the track “Arbiters Of The Apocalypse”