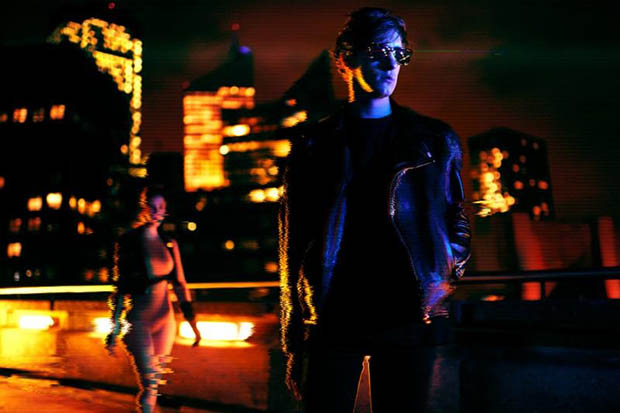 Perturbator is a very interesting musical project, or one man band, led by Parisian James Kent. Perturbator stormed onto the retrosynth scene with 2014’s breakthrough album, Dangerous Days, which was followed up by the recently-released record, The Uncanny Valley. There’s so much more to Perturbator than just the music though, as evidenced by the remarkable cover artwork created by Ariel Zucker-Brull (who creates all of Perturbator’s artwork). To go along with The Uncanny Valley, Ariel also created a whole graphic novel that makes Perturbator’s latest release so much more than just what you hear through your ears. We recently spoke to Ariel to learn more about his association with Perturbator and how all of this artwork came together.

You do all the artwork for the band Perturbator, including their latest album, The Uncanny Valley, that comes with a whole graphic novel. How did this winning association with Perturbator come about?
Ariel: When I was first discovering retrosynth music on YouTube I stumbled upon Perturbator’s track with Memory Ghost, “Naked Tongues,” from his album I Am the Night. So, I listened to everything I could find of his and loved it all. I was listening to his music non-stop while drawing. Eventually, I decided to contact him. I asked him to look at my art, and he soon after asked me to do the cover for his EP, Sexualizer. Early on, we found that our tastes were very similar, so everything we discussed worked out perfectly. Perturbator’s music really is the musical embodiment of everything I’m striving to convey in my artwork. 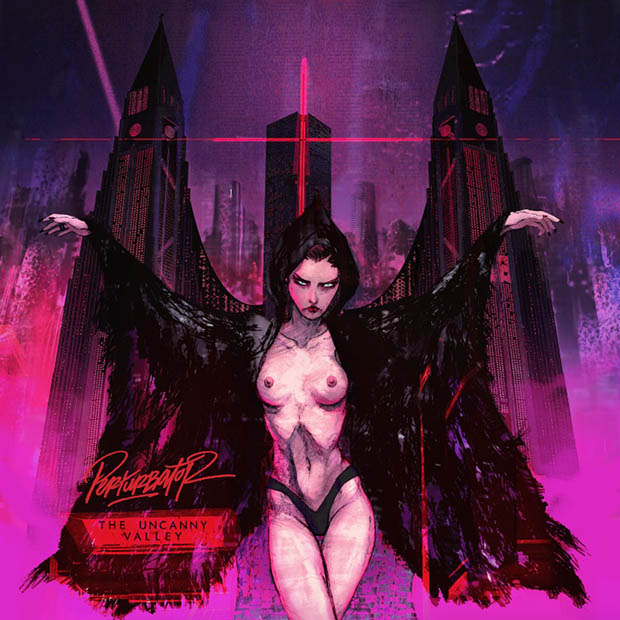 We often ask bands about what the process was like for writing an album, but what was the process like for doing the art? How long would you say it took?
Ariel: For the cover art, Perturbator had an idea to feature a futuristic church. Then we talked and brainstormed, and together we came up with what you see. I’m very into figure drawing, especially women, so I try and fit that into everything. It’s eye-catching, so nudes work great for album covers.

As for the comic, since before Dangerous Days, Perturbator and I spent many hours brainstorming on a plot involving a Satanic computer. The comics are meant to introduce the story but not give it away. The listener should come up with their own ideas while having the images in the background of their imagination. It’s hard to say how long it took because I did everything on and off over the course of a couple years.

Do you come to the band with a bunch of art ideas? Or do you wait to hear the songs and derive inspiration from those in creating the artwork?
Ariel: With Perturbator, I listen to the music first, and then we talk about it. Then, I listen more while drawing it… and maybe some more after looking at it again…. I work best when I can just delve into the final without creating a lot of thumbnails. I end up changing the image so much that getting stuck with whichever thumbnail the client has chosen sometimes hinders the final from being the best possible image. For The Uncanny Valley, we mostly skipped over thumbnails, and this allowed me to do what I really wanted.

We also often ask bands how many songs they wrote for an album, but how many illustrations would you say you came up with for this graphic novel?
Ariel: Fourteen pages in total with roughly 2-6 panels per page. I believe the second and third page double page spread is the strongest piece of art I’ve ever created.

Check out the song “Sentient”

Is creating the artwork a completely independent process, or do you collaborate with anyone on these artworks?
Ariel: Everything is done completely by me. The inspiration is from the music and from my brainstorming sessions with Perturbator.

Your art would definitely fit in what we would call comic book art. Would you consider yourself a comic book fan in the traditional sense?
Ariel: Yes, I love comics. The potential for storytelling is amazing, and the stylization of movement is fascinating. My strongest inspirations have always been comic book artists like Jim Lee, Joe Madureria, Greg Capullo, Dave Finch, Mark Teixeira, Sean Gordon Murphy, Lenil Yu, etc… many of the 1990s guys and the original Image founders.

What other art projects do you have going aside from being Perturbator’s artist?
Ariel: A few other album covers, but the main thing is that I’m in the early stages of developing my own comic series/graphic novel. Stay tuned for details. Check out my Facebook fan page, Blogspot or Instagram.