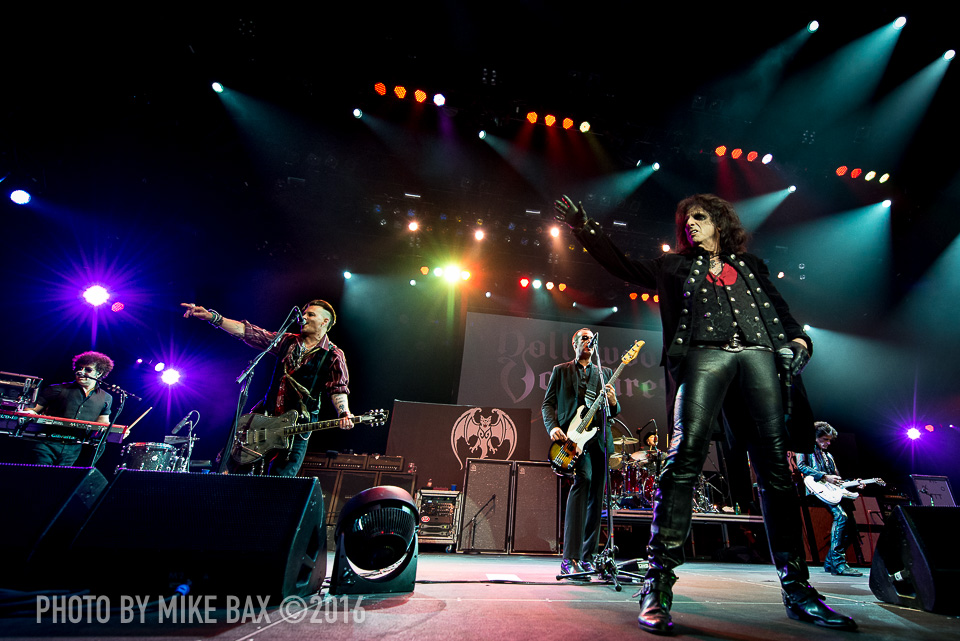 “This is why we don’t own nice things.” Alice Cooper to the crowd after Joe Perry shattered his guitar over one of the speakers at the front of the stage to end off ‘My Generation’.

Needless to say, this evening sold out. Alice Cooper or Joe Perry could sell out Rama individually on their own merits. Johnny Depp, likley the same, doing whatever he wanted to do, would attract a crowd of onlookers just for the chance to see him up close in the flesh. Add in the back up players on this tour, and the electrical energy the band brings to the stage night after night, along with this being the bands only Canadian date, people drove in from all over the place to see this show.

As an old photo of David Bowie was projected behind the band after two songs, Alice Cooper said: “We’re the Hollywood Vampires paying tribute to our dead friends – this is one of them” as both ‘Rebel Rebel’ and ‘Suffragette City’ were performed.

When you have a guitarist as good as Joe Perry in your band, you expect great things from the evening. And Perry totally delivered, showing off his guitar skills on tracks like ‘Manic Depression’ (Jimi Hendrix Experience), the afore mentioned ‘Rebel Rebel’ (David Bowie), ‘Bang a Gong’ and ‘20th Century Boy’ (T. Rex), ‘Break On Through (to the Other Side)’ (The Doors), ‘Whole Lotta Love’ (Led Zeppelin), ‘Come Together’ (The Beatles), ‘Ace Of Spades’ (Motorhead), ‘Sweet Emotion’ (Aerosmith) and ‘I’m Eighteen’ (Alice Cooper).

Once the ‘gee-whiz, it’s Johnny Depp’ factor wore off on the audience, Hollywood Vampires owned the room as a viable band of talented musicians. Depp winked at the girls in the audience and swaggered about from side to side on stage, tossing the occasional guitar pick into the crowd as he performed. Everyone moved around on stage like seasoned professionals. It was so fun to watch the evening unfold.

During ‘Whole Lotta Love’, I muttered out loud that Alice Cooper wasn’t going to be able to carry that song’s high notes just as Bruce Witkin starting in with those very vocals, completely doing the song justice. Witkin is Hollywood Vampires secret weapon, quite frankly, pulling out the stops numerous times over the evenings 100-minute running time.

The evening started a little late – beefed up security measures were put in place – with metal detectors and additional security in place as patrons entered the venue. Once fans were past security, past the $50 tour shirts and into the Entertainment Centre at Casino Rama, they MORE than got their money’s worth. This was a show for the ages, and I’m so glad I got to participate in it.

Setlist:
Raise the Dead
I Got a Line on You
Rebel Rebel
Suffragette City
Manic Depression
Five to One / Break On Through (to the Other Side)
As Bad As I Am
20th Century Boy
Bang a Gong (Get It On)
Come Together
7 and 7 Is
Whole Lotta Love
My Dead Drunk Friends
Stop Messin’ Around
Ace of Spades
Pinball Wizard
My Generation
I’m Eighteen
Sweet Emotion