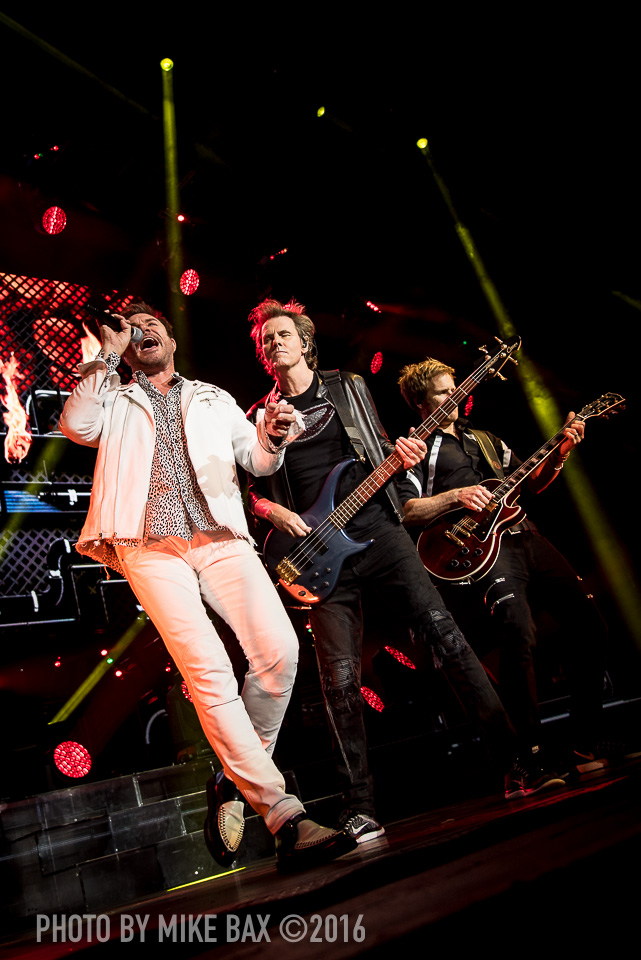 For anyone that arrived late and missed Nile Rodgers and CHIC perform an hour long set of some truly amazing live music, they might not have understood Simon Le Bon’s introduction when Rodgers joined the band on stage to perform ‘Notorious’ and ‘Pressure Off’ mid-way through Duran Duran’s set. When someone of Le Bon’s stature states that modern music owes a debt of gratitude to Rodgers, claiming that the musical landscape as we know it would not exist without him, well, one tends to take notice of that.

Anyone who saw CHIC play earlier was, of course, already somewhat aligned with Le Bon in this regard. CHIC was both superb and sublime live – so much better than I’d remotely hoped for. As CHIC worked their way through songs like ‘I’m Coming Out’, ‘Everybody Dance’, ‘I Want Your Love’, ‘Le Freak’, ‘Good Times’, ‘Dance, Dance, Dance’, ‘Get Lucky’ (Daft Punk), ‘Let’s Dance’ (David Bowie), ‘Rapper’s Delight (The Sugarhill Gang) and a medley of Diana Ross and Sister Sledge songs, it was utterly obvious just how amazing the man is.

Nile Rodgers’ set only touched on his musical contributions over the years – the man has worked with Queen, Blondie, INXS, the Clash, Diana Ross, Carly Simon, Johnny Mathis, Teddy Pendergrass, David Bowie, INXS, Madonna, Mick Jagger, the Thompson Twins, Jeff Beck, Sheena Easton, Michael Jackson, Bob Dylan, Steve Winwood, Robert Plant (the Honeydrippers), Grace Jones, Bryan Ferry, Peter Gabriel, Slash, the B-52’s, Eric Clapton and the Vaughan Brothers. Again, this is only a partial list. Some more modern collaborations include Daft Punk, Pharrell Williams, Avicii, Sam Smith and Disclosure, Tensnake, and David Guetta. Rodgers first worked with Duran Duran in 1983 on The Reflex, and has collaborated and produced music with them throughout their trajectory to the top of the pops. It was so fitting to have him here this evening, performing as a multi-instrumented band boasting two wonderfully powerful female vocalists for the duration of their performance.

If there is an elixir out there that preserves youth, the boys in Duran Duran have it in vast supply; they are walking, rocking billboards for looking good 35 years into a musical career – a fact not lost on the audience of primarily women in attendance at this utterly packed performance at Molson Canadian Amphitheatre, as they were howling like banshees from the moment the band took the stage.

Performing this leg of the tour without Nick Rhodes (home on a family matter) Duran Duran performed as an eight-piece band – the superb Anna Ross and Jess Wagnerm as back-up vocalists; Simon Willescroft on sax and keyboards, Dom Brown on guitar; MNDR filling in for Rhodes on keyboards; Roger Taylor on drums; John Taylor and, of course, Simon Le Bon as vocalist.

Duran Duran touched on the requisite material from their newest album Paper Gods and included the wonderful track ‘Pressure Off’ as one of their performed songs while Nile Rodgers was on stage performing with them. The rest of the evening was in servitude to their expansive back-catalogue of hits, of which they played many. ‘The Wild Boys’, ‘Hungry Like the Wolf’, ‘A View to a Kill’, ‘Come Undone’, ‘Notorious’, ‘Planet Earth’, ‘Ordinary World’, ‘New Moon on Monday’, ‘The Reflex’, ‘Girls on Film’, ‘Save a Prayer’ and ‘Rio’ were all represented, some of them as parts of medleys but still all included. ‘Girls on Film’ boasted a beefed up introduction that teased the song nicely before the band performed it in earnest and ‘New Moon on Monday’ was sandwiched in the middle of ‘(Reach Up for the) Sunrise’ to great effect.

Duran Duran was backed up by some wonderful video footage for the duration of their performance. A blast of confetti for the audience during ‘Pressure Off’ had everyone in the audience reaching for piece of confetti in hopes of bringing a little piece of their Duran Duran experience home with them after the show was done.

I’d be hard pressed to pick the best song of the night. I immensely enjoyed their take on Grandmaster Flash & Melle Mel’s ‘White Lines (Don’t Don’t Do It)’. Mixing David Bowie’s ‘Space Oddity’ in with ‘Planet Earth’ was a lovely and fitting touch. And the 18000-strong group sing-along to ‘Rio’ was pretty damn amazing to behold as well.

Paper Gods, maybe. Rock Gods, definitely. And the Gods were very kind to us this evening.

Duran Duran Setlist:
Paper Gods
The Wild Boys
Hungry Like the Wolf
A View to a Kill
Come Undone
Last Night in the City
What Are the Chances?
Notorious (with Nile Rodgers)
Pressure Off (with Nile Rodgers)
Planet Earth/Space Oddity (David Bowie cover)
Ordinary World
I Don’t Want Your Love
White Lines (Don’t Don’t Do It) (Grandmaster Flash & Melle Mel cover)
(Reach Up for the) Sunrise / New Moon on Monday
The Reflex
Girls on Film

Encore:
Save a Prayer
Rio