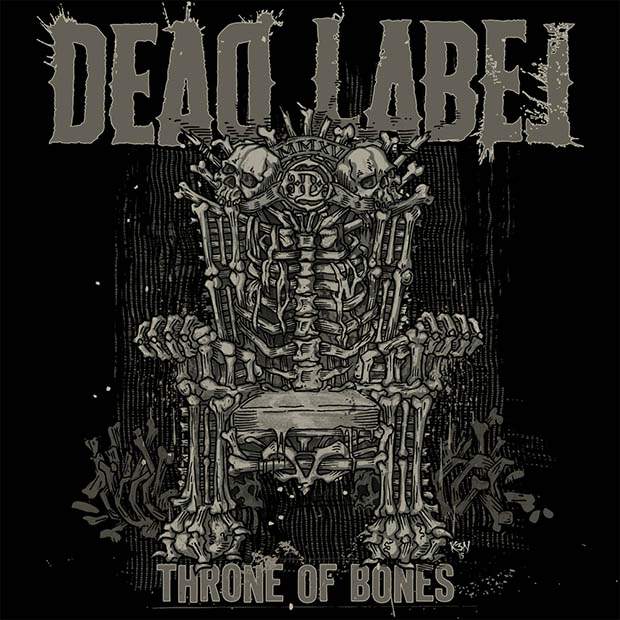 You can guarantee one thing from an Irish metal band and that’s unashamed heaviness and, listening to the groove-laden tracks on Throne Of Bones, the new album from Irish three-piece Dead Label, it’s nice to hear they’re upholding the tradition of their country’s metal scene.

Setting out their intentions as early as the first track, Throne Of Bones sees Dead Label on a mission to, put it bluntly, busts balls. Songs like “Xhume The Venom” are written to incite the kind of headbanging that will put you out of action for months while the groove of the title track or the pulsing chug of “Ominous” certainly conjure up images of violent circle pits as those who have caught that band at Bloodstock and on the Irish live circuit will surely testify to.

It’s not all about groove and ball-breaking metal though with tracks like the seven-minute offering “The Birth Of Suffering” and “The Cleansing” showing this Irish three-piece have much more in their armoury than that. The former sees a calm intro build into some mid-paced chugging death metal with the latter, a mid-album instrumental, perfectly placed to break up the metallic onslaught.

Fronting the band, Dead Label have Dan O’Grady a man with a gruff, guttural style which sits seamlessly in the midst of the heavy tones of Throne Of Bones and, as the album signs off with the glorious onslaught of “The Gates Of Hell”, both O’Grady and his two bandmates bring their second offering to magnificently brutal climax.

Check out the track “Salvation In Sacrifice”