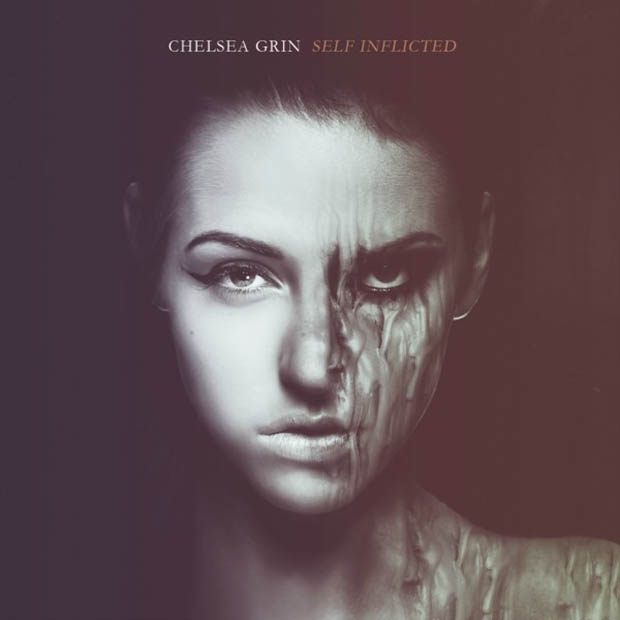 “We don’t care anymore…” screams Alex Koehler, frontman with Salt Lake City deathcore gang Chelsea Grin on “Welcome Back”, the opening track of their fourth album, Self-Inflicted. Taking into consideration all the fairly derisory blog articles that this band have been the subject of, it’s a fairly unsubtle way of the band stating, as they did on the first single from the album, “Clickbait”, that they’re not about to start giving a single fuck about what anybody thinks of them.

Yes, the band the deathcore scene worships and the majority of the online metal media loves to take potshots at (along with Emmure and Atilla) are back and, judging by the ferocious way Self Inflicted explodes into life with the Koehler spraying his expletive-laden lyrics over the top of a wall of chugging deathcore, the Utah extreme metal band have very much got a fire raging in their bellies.

The thing is, if you’re able to flush the derisory press down the toilet, Chelsea Grin have again shown on Self Inflicted that they’re one of the finer exponents of the deathcore genre. A mix of chuggy, sluggish, sludgy deathcore and brutal blasts of extremity, tracks like “Skin Deep” may not redefine the genre in any way, shape or form but, compared to the rest of the genre, they’re way ahead of the majority of the pack when it comes to smashing this sort of carnage out.

For me, the real appeal of the band comes in that ability to switch it effortlessly from gut churning sludginess into rib-breaking ferocity at flick of a switch. Listening to “Broken Bonds”, “Life Sentence” and “Strung Out”, it’s fair to say the deathcore genre has never sounded more scathing as it does on Self-Inflicted.

Check out the track “Never, Forever”