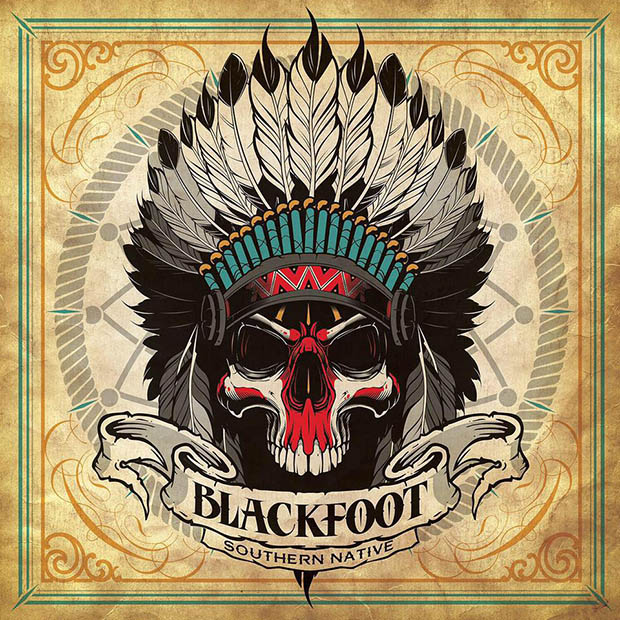 Originally formed in 1969 by current Lynyrd Skynyrd lead guitarist, Rickey Medlocke, the hard-hitting southern rockers based in Jacksonville, Florida are back with a new lineup and album, Southern Native, due out next month via Loud & Proud Records.

In 2012, Medlocke, a member of the Native American Music Hall of Fame, put together a brand new Blackfoot that included lead guitarist/vocalist Tim Rossi, bass player Brian Carpenter and drummer Matt Anastasi while guitarist/vocalist Rick Krasowski came into the fold earlier this year. The original idea was that Medlocke would work solely as the band’s mentor and producer but, in the two years that Southern Native took to make, the 66-year-old found himself writing, performing on and producing the album. Old habits die hard, I guess.

Says Medlocke of the new LP, “This record is head-to-head old school meets new school, classic to new rock for a new generation!” Opening track “Need My Ride” does indeed have a freshness that makes it sound current, yet there is still a classic rock edge to it that should please long-time Blackfoot fans.

The raw energy and enthusiasm these youthful players succeed in getting across continues unabated on “Southern Native” before “Everyman” slows things down quite splendidly with its soaring vocals and superb guitar work reminiscent of one of the Red Hot Chilli Peppers’ finest moments, “Under the Bridge”. “Call of a Hero” wouldn’t sound out of place on a Lenny Kravitz album, “Whiskey Train” is modern southern rock at its best and “Satisfied Man” is fist-pumpingly good. Harmonies come to the fore at the start of “Ohio” a riff-heavy take on the Crosby, Stills, Nash & Young song from 1971.

Putting together this exciting new lineup of musicians clearly hungry for their shot at the big time was a masterstroke on Medlocke’s part as this assured-sounding foursome undoubtedly possess the talent required to take southern rock deeper into the 21st century.

Check out the song “Southern Native”