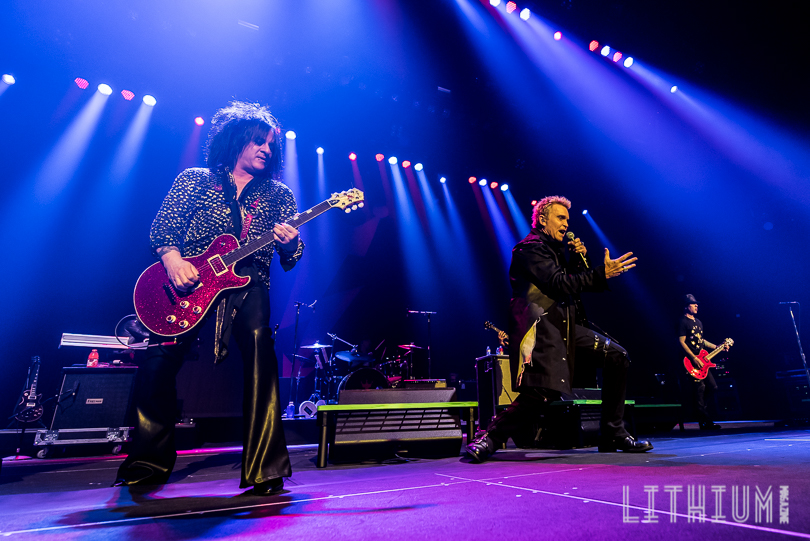 You know when you really want a show to be good, based on your knowledge of how good a particular artist has been?  Billy Idol fell squarely into that role for this show at Casino Rama the past week.  But whether he was under the weather, or having a large part of his 60 years catching up with him somewhat, Idol fell short of the mark at this show.

Artists that have more of their life behind them than in front have been known to skillfully craft their live show to allow for the maximum punch in their vocals, and at the same time conserve their voice as much as possible for that show and subsequent shows on the tour.  But with Idol, that was questionable.  He still casts a striking look, with his trademark snarl and his spiked white punk hair.  And the wide age range of ladies in the crowd appreciated his onstage costume changes, which revealed his considerable work at the gym in the abs department.  But it was the music that was the star at this show.  Hits like “Dancing with Myself” and “Eye’s Without a Face” kept the crowd interested.

Idol’s lifelong guitar-god sideman, Steve Stevens, spent time doing the requisite rock star moves while shredding his collection of axes.  But even Stevens’ chops couldn’t get the energy back into the room despite throwing a few Led Zeppelin and Top Gun riffs into his solos.  “Rebel Yell” was the last song in the main set, and Idol quipped that he’d give it a try due to his failing voice on this night.  He hit some of the high notes but almost whispered many others if he wasn’t asking for the audience’s help.

The two-song encore began with Stevens and Idol onstage for a slow acoustic take on his mega-hit “White Wedding” before launching into the full-blown version.   Every young female fan’s favourite wedding song, “Mony Mony” closed the show, with Idol now shirtless, donning a Stratocaster and showing a bit of guitar prowess.  All in all, Idol was in the building and did his best to bring back the punk of days gone by.   I really wanted the show to be good.  Yet, despite shimmers of amazing, there were many lackluster results this night.

Idol starts his Las Vegas residency at the House of Blues Mandalay Bay at the end of August for a series of shows.