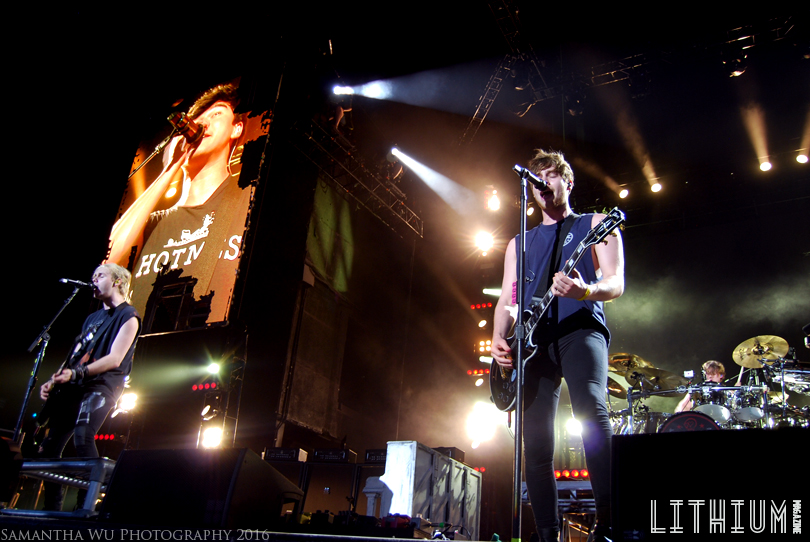 Being a fan since their self-titled debut album, I was pretty excited for this show. An ear-full of “Permanent Vacation” on a day you hate your job, or “Amnesia” after a rough break-up are near perfect avenues for losing oneself in musical empathy. And the intensity of a live performance from this extraordinary Australian group was exponentially more immense than the headphones version.

A line extending from entrance area of Exhibition Place to the Molson Canadian Amphitheatre led to the highest concentration of band fan clothing that I’ve ever seen. Pasts the gates and into the outdoor stadium, the opening groups kicked off the show with wonderful fervor. Pink haired with a hint of punk, Hey Violet vocal lead Rena Lovelis and the band wowed the crowd, notably with their hit “Make Up,” and a cover of “Don’t Let Me Down” by The Chainsmokers with a hauntingly deep Sia-like vibrato. Meanwhile, One Ok Rock brought the noise just as hard with their screamo–dipped hit “Cry Out,” followed by the enchantingly tender fresh track, “Hard to Love.”

The crowd danced, sang, and cheered the all the way through both. But despite the mammoth cluster of fans, I still wasn’t prepared for the piercing roars that erupted as the 5 Seconds of Summer logo appeared on the giant center-stage screen, and they finally stepped out onto the sunset-soaked arena.

Shimmering in lime green light, they started with their high-energy, heavy rock hits “Carry On” and “Hey Everybody” from their second album, Sounds Good, Feels Good. Lead singer, Luke Hemmings, dressed in a Harley Davidson tank top took center stage, among guitarist, Michael Clifford, bassist Calum Hood, and drummer Ashton Irwin. Slightly misty with sweat from the thirty-degree heat, and sporting their signature black skinny jeans and boots style, they pummeled their strings, drums, and vocal chords with a vehemence that carried on throughout the evening.

After shouting out to the crowd, they kept the happy-go-lucky theme going with their sassy yet lighthearted dancables, “Take My Money, Voodoo Doll,” and “Don’t Stop.” Only when they shifted to the slow, romantic ballad “Long Way Home,” guaranteed to twinge a heart with fond thoughts of high school sweethearts, did the stage lights change to a warm, healing orange glow. As dusk settled, each love song elicited soft, choir-like sing-along and the waving of twinkling smartphones from the audience. Each anthem of rocking out brought about another round of twisting, shouting, pandemonium.

What I hadn’t fully expected was how personable and wry the group would be. They playfully hailed Aussie-Canadian relationships, our nation’s exemplary leadership in human equality, and then demanded that we stop being so “well behaved,” before challenging the screaming crowd to beat out New York on the decibel scale. We even got some (possibly) impromptu Canadian songs: “Poutine” and “Living in the Six.” Their dry humor and organic on-stage banter brought balance to the raw discharge and passion of the set list, making them equally memorable as musicians and individuals.

Seeing 5 Seconds of Summer was a reminder of why the feeling that one has outgrown (for lack of a better term) boy bands, is often deeply misleading. I’m not just referring to the longstanding influence of the Beatles or the Backstreet Boys. Themes that come from these bands, in all their different incarnations, are what effectively become timeless.

Live your life to fullest, in the present.

If you love someone, and they don’t know, tell them.

If your heart breaks, it okay to not to be okay.

When things are at their worst, it’s only a matter of time before they change for the better.

These are the messages of hope that so many of us internalize when we’re young, and carry forward when we understand that life is so much more complicated than we expected. This band, these people, in addition to providing colossal entertainment, are messengers. And whether they’re your musical cup of tea or not, the atmosphere in the crowd alone demonstrated the inspirational impact that they have.