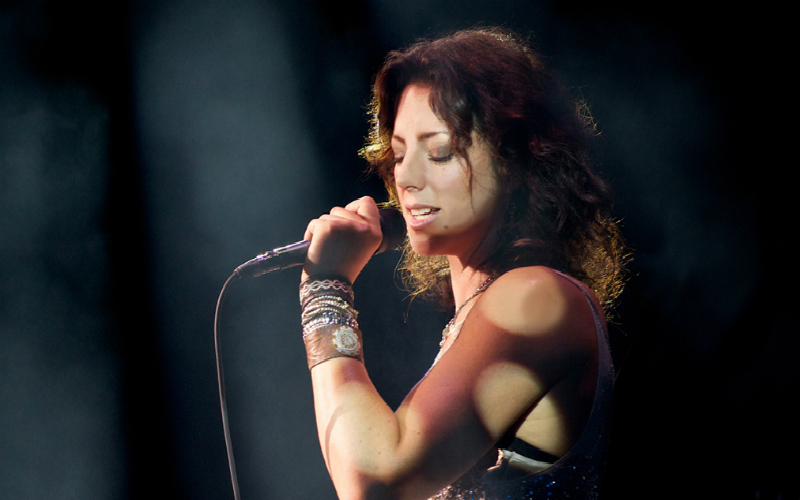 Even though she was playing to a capacity crowd in the sprawling Sony Centre, Sarah McLachlan still brought an intimate feel to her TD Toronto Jazz Festival Set.

After she finished playing a stripped-down version of ‘Possession’, she pointed out that it was somewhat ironic that it’s often used as a love song considering she wrote it about her experience with a stalker. This set the mood for the rest of the far too short set as she kept up an easy-going banter with the audience.

She switched between playing piano and playing guitar. Her band joined her for ‘Building a Mystery’ but often, it was just McLachlan at her piano, holding the audience utterly spellbound. She played songs from throughout her career and even a few lesser-known ones as well.

McLachlan took the time to explain the story behind many of her songs, about how ‘Aida’ was an apology for sleeping with a friend’s boyfriend, who ended up becoming her husband and father to her two children.

The stripped-down versions of songs that she played throughout the evening benefitted many of them. She played tribute to Prince with a heartfelt cover of ‘Nothing Compares 2 U’

Another highlight was the slightly retooled version of many of her songs, particularly ‘Hold On’

She readily admitted that like most songwriters, she often writes when she’s feeling depressed, the dark feel to many of her songs became a bit of a running gag throughout the evening. One amusing moment came when she implored the audience to keep above all the darkness in the world before launching into “another heart broke song.”

Towards the end of her set, she admitted that she had been fighting Laryngitis for the past two months but her voice showed no signs of strain as she took it through an operatic workout on one of the last songs.

The air in the Sony Centre became dusty when McLachlan launched into ‘Angel’ towards the end of her set. She returned to the stage a moment before launching into a short encore that included leading the audience in a sing-along of ‘Ice Cream’ and paying tribute to her father.

It’s a testament to McLachlan’s ability as an artist that she can make the audience feel as though she is addressing them directly, regardless of where they may be seated in a venue.