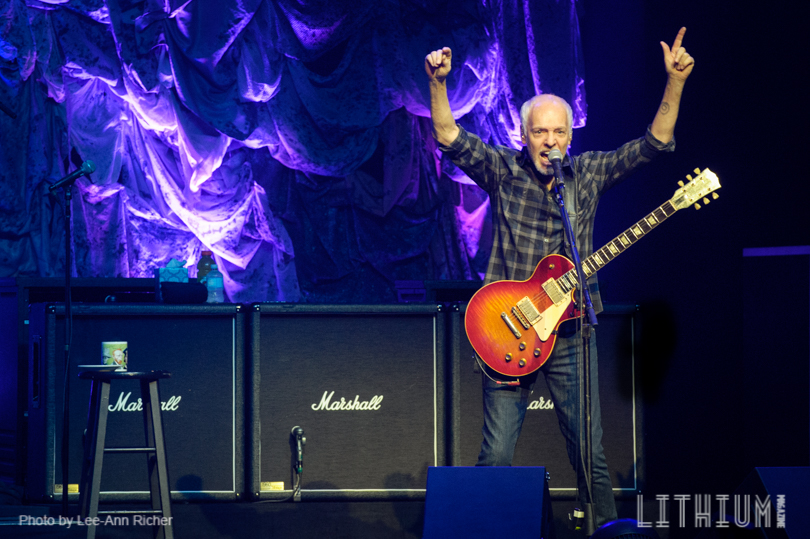 Peter Frampton was a founding member of one of the first supergroups, Humble Pie, in the late 1960’s. He then went on to a solo career and is best known for his career-launching album, Frampton Comes Alive! This album reached number one on the Billboard 200 and was in the top place for 10 weeks. It was not only the top-selling album for 1976, selling over 6 million units in the US but is also one of the top selling albums to date. Back then I worked in a record store and we couldn’t keep it in stock.

Speaking of back then, my first almost Frampton experience was back in the late 1970’s. I purchased tickets for myself and three friends to see Peter Frampton.  We were all merrily traveling to Toronto when my car broke down on the highway. As we were being towed back home to Hamilton I was moaning, “He is probably singing Show Me the Way and Do You Feel Like We Do right now! This night sucks!” Needless to say, none of us saw the concert.

Now let’s fast forward to Thursday ,June 16, 2016. I am getting a chance to see and review Peter Frampton and my wife is photographing this sold out show.

The evening started at exactly 8:40pm with the lights going down as the emcee announced, “And here is Peter Fucking Frampton!!” Upon entering the stage you could see he still retains his boyish charm and warmth. This is also evident on his Facebook page where he personally answers fans’ questions, in a kind and friendly way.

The evening started with Baby (Somethin’s Happening) off his third studio album, and later on Frampton Comes Alive. Frampton announced everyone was allowed to take photos and video for the first three songs and then asked for the fans to put away their devices and enjoy the show. That was something different and very cool, especially at a casino.

Frampton’s interaction with the crowd was constant throughout the show. He never stopped smiling and often chatted with the crowd. He got everyone involved by encouraging them to clap and sing along. He mentioned meeting a couple (who did not know who he was) the day before and graced them with 10th-row tickets!

The band was made up of stellar musicians and looked genuinely happy to be playing alongside this UK boy. There were a couple of covers thrown in just to change it up. Rebel Rebel was the second song performed, paying tribute to the late David Bowie, who was a dear friend and mentor to Frampton. That was a nice touch. Later on they played an instrumental version or Soundgarden’s song, Black Hole Sun. Frampton has performed this on stage with Chris Cornell (singer for Soundgarden and Audioslave) in the past.

During (I’ll Give You) Money, Frampton traded off guitar solos in true 70’s style. It had great dynamics and built over many minutes to an amazing end where you just wanted to sit back in your seat, take a deep breath and say: ‘That was incredible!’ The best way I can describe it is when at the end of a great film you think, “no…is it over already?” and yet when you look at your watch three hours have gone by!

Frampton would take the center stage mic when he was using the Talkbox he is known for. The Talkbox is an effects unit for modifying a musician’s voice by joining the instrument to his voice. If you haven’t heard this, it is time to break out Frampton Comes Alive and play Do You Feel Like We Do.

The evening was a shortened set list compared to other recent shows. However, it was filled with hits and was an evening that I would repeat in a heartbeat. Seeing Frampton come alive with his four-piece backing band was as good as it gets!

In addition, we would like to thank Jen at the Avalon Ballroom for her hospitality!

Thought I was done? Not quite yet. Remember I talked about my almost Frampton experience in the beginning of the review? My car (not the same one) broke down on the way home! At least I got to see this show this time!