So, another year on, another Download festival. What will this year have in store for the British fans? Will it go down in history for giving us some legendary performances from world-class bands or will it be lost to the ages?

The majority of punters descended on Donnington Park on Thursday June, 9 to pitch up tents, crack open some beers and enjoy the entertainment on offer in the festival village, comedy tents, fairground attractions and shopping for all those pointless knickknacks that seem like a great idea once a bottle of Jägermeister has been consumed. What a day to kick off as well, the sun is shining and the shades out in force but, sadly, this is not to last as extreme weather warnings for the next few days have been issued. This, however, is Download (aka Drownload / Brownload) so this is something we’ve come to expect!

Unfortunately I could hear in the distance a pop punk cover of Smooth Criminal indicating that my plan to open my festival experience with the likes of Alien Ant Farm was simply not to be.

BabyMetal are a band I’ve been curious about for a while now. 3 young (very young in fact) girls from Japan who mix metal with J pop creating a unique sound exclusive to them. When they first appeared on the scene I couldn’t help but feel this band represented child exploitation in the 21st century and, as such, perhaps out of principle, I avoided them. In this instance curiosity got the better of me and I felt the need to witness the hype around this group so I make my way the newly renamed main stage, The Lemmy Stage to see what all the fuss is about.

Before the girls take to the stage, however, what we have feared happens. The heavens open up and a downpour the likes of which I have never experienced in my entire life whist attending festivals strikes. In a word, it is biblical! Raindrops the size of golf balls! This causes a slight delay with the band taking the stage but, when they manage to start, the show kicks off with a video intro explaining the backstory of the band. Now, having never listened to anything before, I’ve got to say that their set left me feeling really rather conflicted. There is no doubt that they are incredibly talented and an absolute delight to watch with catchy fun tunes that had the crown rocking but my reservations about the concept of this group remain. I need a festival temperature beer, a shot and contemplation time to mull over what I have just witnessed.

Metalcore favourites Killswitch Engage are always a welcome sight on the Download Festival bill having made a number of field-flattening appearances over the years. This year is no exception and, even with the weather taking a turn for the wetter, their Friday afternoon slot is one of the highlights of the weekend with choice cuts like “My Last Serenade” certainly going some way to turning the field into a mudbath.

Another firm favourite at Download, and if we’re being honest, the rock scene in general, is Ginger Wildheart. One of rock’s unforgettable characters, the Geordie singer looks genuinely bemused by the reaction. “I guess you kind of like us?” laughs the Wildhearts frontman but, with their crowd-pleasing set including the likes of “I Wanna Go Where The People Go” and “Caffeine Bomb”, what is there not to like?

Next up is a band I have dreamed of seeing for many, many years, so it’s off to the Encore stage. Sadly as frontman Daryl Palumbo suffers from Crohn’s disease it has left a wake of cancelled shows. This, in many cases, would leave fans furious but, given the situation, it has earned Glassjaw and especially Palumbo huge respect for fighting forward and not letting Crohn’s control the fate of the band. What a performance! Full of energy and, for many of the crowd, this was a show long in the making and earned it’s place amongst a list of shows that I will always remember.

As we head into the final hours of the first night, the weather is still shit but that matters not one bit to the 80,000 fans losing their shit to the nu-metal juggernaut that is Korn. Appearing as special guests on the main stage, Jonathan Davies and Co give an hour or so full of reasons why they’re seen as one of the forerunners of the nu-metal scene. “Here To Stay”, “Blind” and “Shoots N’ Ladders” are smashed out by a band who, even at this stage of their career, are pretty unstoppable. 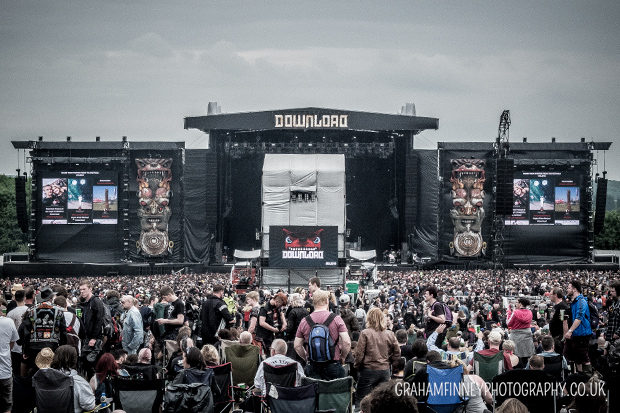 Back over to the Maverick stage to see something that has caught my attention, a concept movie / live show directed by Bjorn Tagemose and featuring the likes of Henry Rollins, Grace Jones, Slash, Iggy Pop, Josh Homme, Jesse Hughes and the man himself, Lemmy, with Henry Rollins performing live. Now, I’m not sure how to describe what I have actually seen however, the description I have read online about this simply states ‘A punk angel is sent to earth to test humanity and set the world on fire.’ I’m left concerned that someone has slipped some sort of hallucinogenic into my drink but, whatever this was all about everyone must watch the film and see why this has been next to impossible to explain.

Headlining the main stage is the mighty Rammstein. Although this really was an amazing show, it did feel a little PG-13 considering what the band are known for during their live shows. For those who have not witnessed the spectacle that is Rammstein before, I can only imagine the show was everything they’d hoped for – pyrotechnics, sexually charged themes and lead singer Till Lindemann even donning angel wings and flying around the stage with flames shooting out all over the place. Alas, for those of us that have witnessed a stage show by these guys before, the general opinion was – “where the singers fake dick spewing cum?”. Despite this the first night headliners delivered a fantastic show thankfully not ruined by the weather.

Away from the pyro-enhanced frivolities of the main stage, if you ventured a little further up the hill to the Dogtooth stage, Corby troublemakers Raging Speedhorn were getting up to all sorts of mischief as they bashed out their headline set with the kind of brutal force you expect from the band. Scanning out across the crowd, the band would have seen many familiar faces from the UK metal scene in attendance and the “old faithful” found themselves treated to a set mixed up of old favourites like “Hate Song” with new bangers like “Bring Out Your Dead”. Put it this way, if Rammstein’s set didn’t keep the population of the nearest city awake late on the Friday night, Raging Speedhorn certainly did. 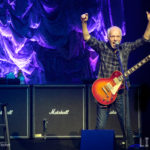