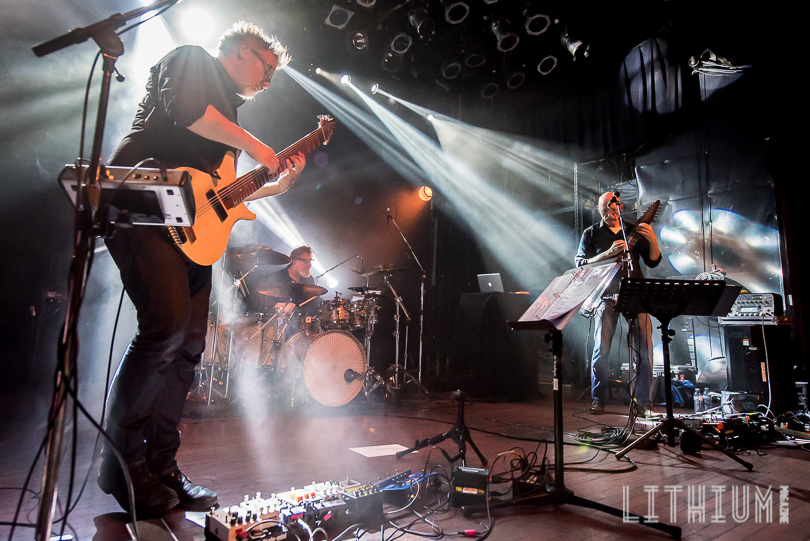 Prog-rock royalty pulled into the Mod Club this past Saturday night for an eclectic 90-minute set of rich and complex music.  Stick Men is comprised of Tony Levin, bassist, playing for notable bands over the years such as King Crimson, Peter Gabriel, Alice Cooper, Pink Floyd and David Bowie.  And that’s really just scratching the surface of the influence he has had in the music business since the 70’s.  As well, there is Pat Mastelotto, who is also the drummer for King Crimson, and rounding out the power trio is producer/composer Markus Reuter who kept his unique 8-string touch-guitar singing all evening.  The venue was small and afforded the lucky fans an up close way to experience these artists and this music in a way normally reserved for cavernous halls.

Much of Stick Men’s work is instrumental, with sparse vocals and spoken word sprinkled in here and there.  The tour is named Prog Noir after the new album due out in the fall.  The band worked a few of new tracks into the set, including “Plutonium”, “Schattenhaft” and “Prog Noir”.  Levin plays a unique 12 stringed bass instrument called the Chapman Stick.  And it’s an engaging experience just watching him deftly navigate the extra wide fretboard using all his fingers, much like a pianist.  The band took turns introducing each and every song in the set, giving the fans insight on their backstories or humorous anecdotes before tearing them open.  Reuter is an accomplished musician who works his guitar much like Levin, playing almost entirely by touching the fretboard with both hands and all fingers.  Two of the three members are from the most current incarnation of King Crimson and they played a pair of Crimson pieces.  As Reuter introduced “Level 5” he indicated that there is a 7 piece and a 5 piece band version, and that this was the trio version.  It was the roaring King Crimson anthem that everyone was there to see, with punishing drums, bass and screaming Robert Fripp-inspired guitar.

They ended the night with “Open Pt. 3 – Truncheon” from their largely improvised album “Open”.  After the show, the band spent some time on the venue floor meeting fans, posing for pictures and signing albums and whatnot.  The band members seemed excited to be interacting with their fans.  A rare thing in this homogenized, prepackaged, and insulated music business.  The three R’s were in full force here.  Real instruments, Real music, Real Musicians.

Click on photos to enlarge and scroll through the gallery.

Crack in the Sky