And now, for something completely different.

Kicking off this Victoria Day long weekend, the Sony Centre for the Performing Arts opened its doors for a sea of excited fans young and old. The line for merchandise alone stretched around the building. The smiling and eager crowd, wearing recently purchased merchandise and uniquely detailed cosplay outfits, filed into the venue in anticipation for Hatsune Miku‘s only Canadian stop during her Miku Expo 2016 North American Tour.

Who is Hatsune Miku? She is a 16-year-old pop idol who is all the rage in her native Japan, turning non-believers into starry-eyed fans across the globe with her doe-eyed innocence, long  teal-coloured pigtails, cyber Lolita-style outfits, and a doll-like voice capable of melting the coldest heart. Hatsune Miku is all the rage and the epitome of kawaii. She is also a hologram — a vocaloid (singing voice synthesizer) created by Crypton Future Media who is featured in over 100, 000 songs. Hatsune Miku translates to the first sound from the future.

Backed by a very impressive live band, Hatsune Miku is a digital pop idol projected onto a glass display. She brings with her a few of her other digital friends to perform with adding dimension and upping the cute factor. Her voice will not waver, she won’t grow tired, she won’t miss a note or a dance step, she won’t be spontaneous — she isn’t human.

To be frank, this had the potential to be a rather terrible show and I approached it with justified apprehension. I mean, this has to be a gimmick, right?  Something with which to cash in on the merchandising potential (of which, as was evident with the crowd, was incredibly lucrative) and draw from the hype of the upcoming Anime North convention next weekend. For someone like me, a concert goer who isn’t previously familiar with this computerized little lady, would I enjoy this performance as a stand-alone piece of live music? I had my doubts.

I was wrong. Surprisingly and delightfully wrong. It started with openers Anamanaguchi, a New York-based band combining electronic sounds using retro video game technology from the ’80s and ’90s and live instruments. The end result is a hard edged electro-pop sound that is incredibly catchy and infectious, reminiscent of old-school video game soundtracks. On stage, Anamanaguchi did a great job engaging the crowd with a solid and entertaining performance. There’s a great amount of talent coming from these guys and they are definitely worth checking out.

Finally, it was time for the start of the show. With Hatsune Miku being a hologram on a screen, the potential is limitless for very sumptuous visual effects and graphics to which this performance was full of. Miku appears in a glittery sparkle of light, in a sea of bubbles, in a haze of digital static, suddenly she has wings and she’s flying. The technology used to create her is very impressive and visually she’s far more than just a cartoon image on a screen. She’s three-dimensional and very realistic; her movements and mannerisms are true and substantial. In the beginning, I often found myself lost in the illusion thinking ‘wow, she’s singing incredibly fast without taking a breath! Oh wait, she’s not real’ or ‘that was the quickest full costume change I’ve ever seen! Oh wait, she’s not real’. When she speaks to the audience, she has the cutest little girl voice and a delightful Japanese accent. When she said, “Let’s all have a wonderful time!” I melted.

The live band, as I mentioned, is incredible. The band is comprised of Tsuguhito Konno on bass, Kensuke Ito on drums, Takahiro Misawa on guitars and MEG.ME on keyboards. They’re a lot more than what I bargained for when I thought about how much energy and dedication a band can put into backing a digital image. These guys played the heck out of their instruments, committed and delivered one exquisite show –  in particular, Misawa, his solos on the guitar were very impressive.

Miku also has a few friends, other vocaloid characters, that join her on stage. They’re, in a way, colour coded, and the colours do play a part in the show. While Miku is a blue-green, there’s also Kaito who is blue, Megurine Luka who is pink, Meiko who is red, Kagamine Rin who is orange and Kagamine Len who is yellow. They each have their own unique personalities on stage. While Megurine Luka is mysterious and reserved, Meiko is sensual with a healthy dose of sex appeal.

Audience participation is key to the show, as is standard with many J-pop concerts, the crowd is lit up in a sea of coloured glow sticks. All audience members were given a complimentary branded Miku Expo glow stick to wave in the crowd. A special glow wand was available for purchase that changed to six different colours so the crowd could shift to the appropriate hue based on who took the stage. There was even a specific waving motion for the glow sticks used through the show, a rolling backwards motion that felt like directing air traffic. Amusingly, there weren’t special instructions given to use this particular movement, like a hive mind the crowd just knew to do it and when to do it.

In a nutshell, the show was just a lot of fun. The J-pop music had a grittier rock edge to it from the very talented musicians that I particularly enjoyed which made the music more listenable and less teeth-achingly saccharine, even though Miku and her collective vocaloid friends were. Hatsune Miku is undoubtedly adorable and the graphics made for a very visually entertaining experience. I could have done without the extended wait for the encore and I wish that the rest of the vocaloid characters had made a final appearance during the encore but that aside, it was a great time. I didn’t know most of the songs, I didn’t understand the Japanese, I didn’t actually care.

Hatsune Miku concluded her Toronto stop with a Miku Expo Short Film Festival at the Art Gallery of Ontario Saturday afternoon and continues her tour in Chicago on May 25. If you missed your chance to see her perform this time around, fret not as there will be plenty of opportunities to see her “live” in Toronto in the future. 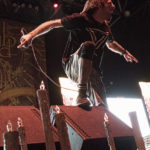 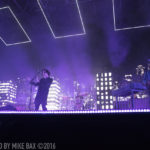 Jean-Michel Jarre @ Sony Centre for the Performing Arts (Toronto, ON) on May 9, 2017 [Photos & Show Review]