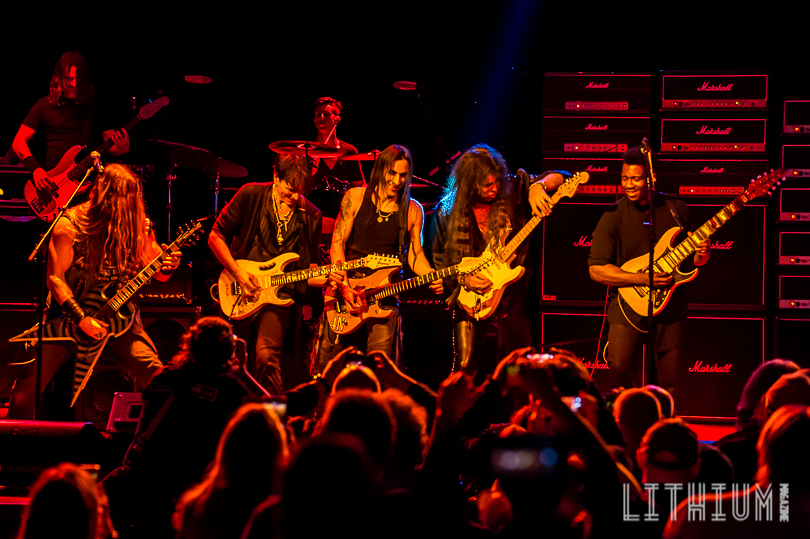 Five of the world’s most iconic axe-slingers hit the stage and played about 5 billion notes during their 3.5-hour long set this past Wednesday night at Massey Hall in Toronto.  The End!

Ok, maybe we’ll dig a bit deeper.  Generation Axe was the brainchild of Steve Vai who was looking for a few friends to join him on a guitar-centric tour that would cater specifically to guitar loving fans.  Vai definitely found the right friends to bring along for the ride.  Black Label Society frontman Zakk Wylde, virtuoso shredder Yngwie Malmsteen, Extreme guitarist Nuno Bettencourt and Animals as Leaders 8-string master Tosin Abasi were given the nod and they accepted the challenge.  The show was set up to showcase each performer’s talents individually, as well as collaboration between pairs or more of them, culminating in the whole group onstage for a few timeless gems.

To say that the iconic guitar solo was the star of the show would be a gross understatement.  Each artist brought his own unique flavour to the stage.   After all five were onstage for a cover of Boston’s “Foreplay”, Abasi was first up playing his custom made 8-string instruments, joined later by Bettencourt for a duo set with the ‘house band’.  On keys was Malmsteen’s veteran player Nick Marinovich, Matt Garstka of Animals as Leaders on drums, and bassist Pete Griffin from Zappa Plays Zappa and collaborator with Edgar Winter.  One of the standout parts for Bettencourt was when he teased the fans with a few bars of “More Than Words” on acoustic before jamming out alone with a backing track.

Wylde hit the stage like a hurricane pulling out old hits like Black Sabbath’s “N.I.B” complete with over 20 minutes of added solo work as well as an equally extended flight through Jimi Hendrix’s “Little Wing”.  Malmsteen’s set was primarily just he, his guitar and all manner of effects and loops.  With high kicks, guitars being tossed around like rag dolls, strings being forcefully torn off their foundations, and classically influenced shredding, at a million miles an hour, Malmsteen’s fretwork continues to be something special to see.

Vai joined Malmsteen for one, then Vai alone for his turn at the helm.  Vai is full of expressions when on stage as he man handles his GEM guitars for all their worth.  The trem bar routinely taking a beating resulting in sounds that only Vai can pull off.  All but Malmsteen hit the stage for the cover of Edgar Winter’s Frankenstein followed by the full 5 onstage for Deep Purple’s “Highway Star” with Malmsteen on vocals.

As one of the longer sets as tours go these days, the fans hung on every note, sometimes sitting quietly and taking it all in, other times on their feet fists pumping and heads banging.  It was a unique way to be able to experience so many diverse artists showing their wares in one place and interacting together in ways not normally seen.  This might be only the beginning of this type of collaborative tour format.